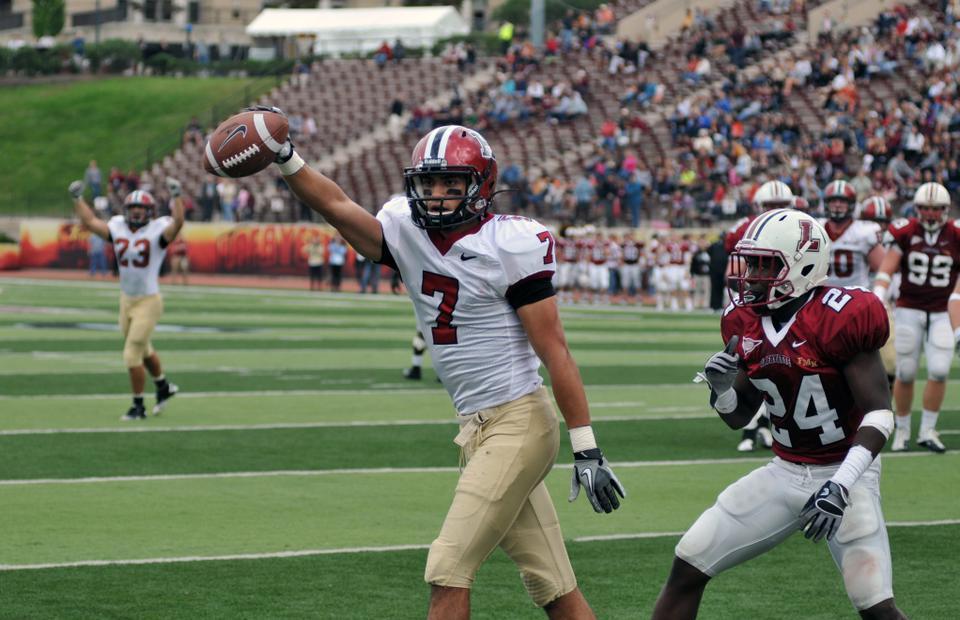 Alex M. Sarkisian '12 celebrates a touchdown. Despite heavy interference, Sarkisian scored with 3 seconds remaining in the first half.
By Scott A. Sherman, Crimson Staff Writer

EASTON, Pa.—For the second year in a row, the Crimson found itself down to its third-string sophomore quarterback on the road against Lafayette.

And for the second year in a row, that didn’t matter one bit.

A dominant defensive performance highlighted Harvard’s (2-1, 1-0 Ivy) second-straight blowout of the Leopards (1-4, 0-1 Patriot), as the Crimson made a strong statement in a 31-3 win over a team that defeated two-time Ivy League defending champion Penn by 25 points two weeks ago.

“Any time you can win a game on the road against a very solid football team with your third-string QB, you’re very happy,” Crimson coach Tim Murphy said. “I think we played an all-around team effort.”

Last season, then-sophomore third-stringer Colton Chapple—filling in for senior Andrew Hatch ’11 and then-junior Collier Winters—led the Crimson to a 35-10 win over Lafayette at Fisher Stadium.

With Winters missing his second straight game of 2011 with a hamstring injury, Chapple was called upon to start against the Leopards once again on Saturday.

The junior quarterback was extremely efficient in the first half, completing 14-of-18 passes for 121 yards and a touchdown. He was at his best with the clock winding down, orchestrating a 10-play, 52-yard touchdown drive in 1:44 at the half’s end.

On that drive, Chapple came up especially clutch on third down, hitting junior tight end Kyle Juszczyk for a 17-yard pickup on a 3rd-and-6 from the Lafayette 48, then connecting with senior wideout Chris Lorditch for a 10-yard gain on 3rd-and-5 from the 26.

After a one-yard rush and illegal shift penalty left the Crimson staring at a 2nd-and-14 from the Lafayette 20, senior receiver Alex Sarkisian dropped a pass that hit him in the chest at the goal line, costing the Crimson a scoring chance.

But Chapple, unfazed, responded on third down by hitting Juszczyk in the flat for 16 yards. On the next play, Sarkisian made up for his earlier drop, catching a fade over Leopards DB Brandon Ellis to put the Crimson up, 17-3, with just three seconds left in the half.

“[Sarkisian] came back and redeemed himself,” Murphy said. “He made a good play ... It was a big momentum builder for us, a big momentum killer for them.”

Chapple only had a chance to lead that drive because of the play of his defense. A strip sack by junior Grant Sickle and a recovery by senior Josue Ortiz had put the ball back in Chapple’s hands with under two minutes to go.

“Harvard’s a very good football team,” Lafayette coach Frank Tavani said. “They play very well. Their D-Line is the big part of it; those guys inside are as good as anybody we’ve played.”

In the locker room at the break, Chapple’s back tightened up, forcing the Crimson to turn to sophomore Michael Pruneau for his first career appearance under center.

Things started slow for Pruneau’s offense to open the second half, as the team went three-and-out without gaining a yard. On the Crimson’s second drive of the period, junior running back Treavor Scales dropped a swing pass in the backfield, and Lafayette recovered the fumble at the Harvard eight.

But at that point, the Leopards began to beat themselves. A holding penalty and a false start took away a Lafayette touchdown and set the squad back to a 3rd-and-goal from the 13. Senior Dan Minamide then easily intercepted a Shoop pass in the end zone—his second straight game with a goalline pick—to keep the Leopards off the scoreboard.

After a three-and-out on its next drive, Harvard sent junior Jacob Dombrowski out to punt. Dombrowski sent away a booming 54-yarder that was fumbled by Leopards returner Darius Safford after a hit from senior captain Alex Gedeon. Juszczyk recovered the fumble, setting Pruneau up with great field position.

“Jake got off a really great punt, a lot of hangtime which allowed me to get down the field,” Gedeon said. “As the returner was coming around I was able to get a hand on the ball and then [Juszczyk] was able to pick it up ... It really all started with Jake.”

After Scales got nowhere on back-to-back runs, Pruneau managed just a short completion to Lorditch on a 3rd-and-14 from the Lafayette 22.

But Leopards linebacker Leroy Butler was called for both roughing the passer and unsportsmanlike conduct on the same play, setting the Crimson up with a first-and-goal from the Lafayette two. Pruneau then rolled out and hit sophomore tight end Cameron Brate off a deflection for the quarterback’s first career TD, putting Harvard up, 24-7.

The defense would hold down the fort from there, stopping the Leopards on a fourth-and-six from the Crimson 25 on Lafayette’s ensuing drive.

The Leopards recorded just 57 total yards in the final quarter, while Harvard freshman running back Zach Boden joined Pruneau with his first career collegiate touchdown on a powerful 43-yard scamper with 2:46 left in the game.

It was the Crimson’s second rushing score of the contest, after Scales gave Harvard a 10-3 lead with a four-yard run 8:20 into the second quarter.

“I thought we did what we had to do offensively,” Murphy said. “It wasn’t pretty all the time, but if you play hard, and your defense plays that well, you have a chance at least to beat anybody ... today was just our day, it was one of those days.”