On National Coming Out Day, Athletes Come Out as Allies 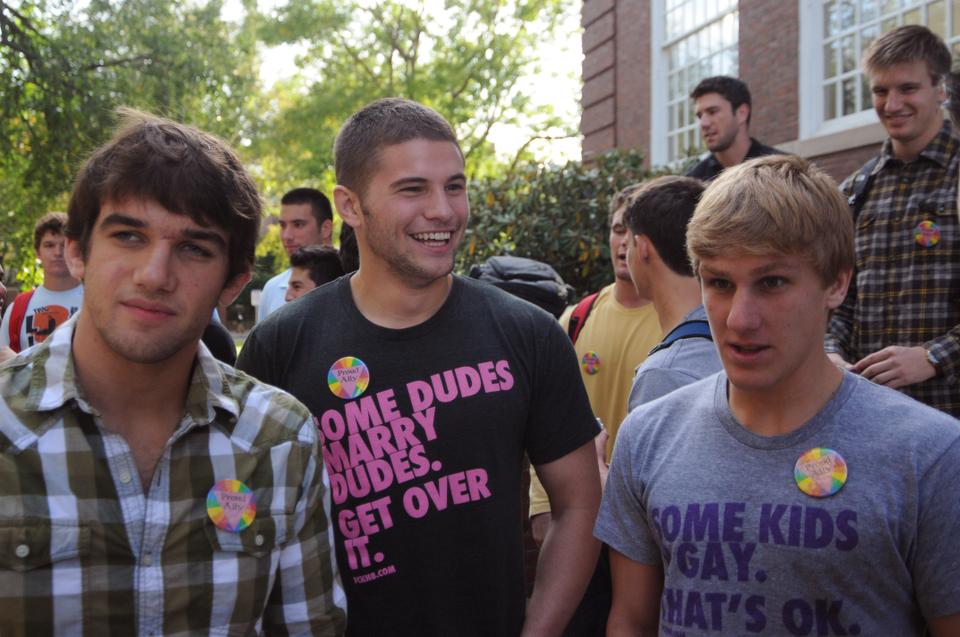 Before their Tuesday afternoon practice, members of the Harvard varsity wrestling team posed for a picture on the steps in front of the Malkin Athletic Center. But instead of sporting their team uniforms in this photo, the athletes came in gay pride attire and rainbow pins that read “Proud Ally.”

In honor of National Coming Out Day, the men chose to wear the pins in solidarity with the BGLTQ community.

Harvard College Queer Students and Allies co-president Emma Q. Wang ’12 said that this year the student group wanted to emphasize the importance of coming out as an ally.

“Sometimes it’s difficult to be very vocal as an ally,” she said. “We want them to feel included because they play such an important role.”

According to wrestler David J. Lalo ’13, it was a non-resident tutor in Lowell House, Robert Joseph “R.J.” Jenkins, who inspired the team to participate in National Coming Out Day.

“[R.J.] has made a tremendous impact across our team,” Lalo said. “We wanted to show him we support the LGBT community.”

Jenkins, who is openly gay, said that he casually brought up the idea of wearing the pins one day while speaking with several athletes in the Lowell dining hall.

He said the men responded positively to his proposal.

“I started to imagine it as an opportunity for them to come out as allies,” he said. “To think about a day for allies to come out and say, ‘I accept these people in my life. I accept them for who they are.’”

The athletes said their close relationship with Jenkins compelled them to show support for the BGLTQ community.

Timothy P. McCarthy ’93, director of the Sexuality, Gender, and Human Rights program at the Carr Center for Human Rights Policy, remembered that when he was an undergraduate, BGLTQ-identified individuals faced a stigma in the Harvard community.

“A lot of us wanted to distance ourselves from those courageous souls,” McCarthy said.

While House tutors and other faculty members provided a support system for BGLTQ students, McCarthy said solidarity was not as public then as it is today.

Jenkins said the athletes are leaders in the effort to combat discrimination against BGLTQ-identified individuals.

Wearing a shirt that said, “Some Dudes Marry Dudes. Get Over It,” Anthony J. Buxton ’13, a varsity wrestler, said he had received smiles from people on the street.

“There is a much larger community of allies who are willing and ready–even eager–to stand with their LGBT peers,” McCarthy said.