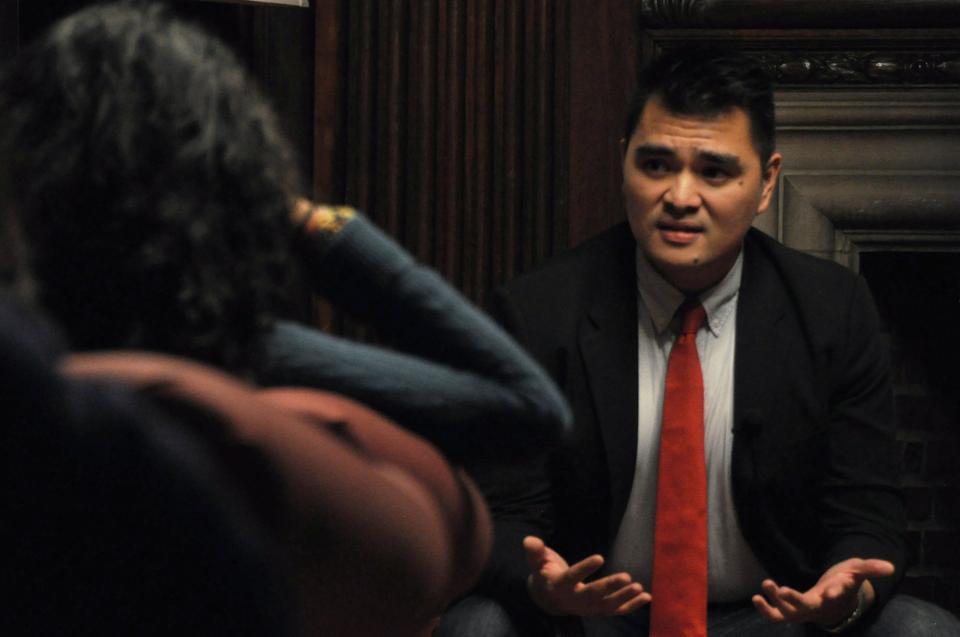 Jose Antonio Vargas, a former Washington Post correspondent who "came out" four months ago as an undocumented immigrant, answers students' questions in Kirkland JCR last Saturday at an event sponsored by Act on a DREAM and Kirkland Conversations.
By Jose A. DelReal, Crimson Staff Writer

In search of effective strategies for advocating immigration reform, nearly 50 students attended the Ivy League Immigrants’ Rights Coalition Summit over the weekend, hosted by Harvard College Act on a Dream.

Joining a contingent of 20 Harvard students, 26 attendees traveled to Cambridge for the summit. Every school in the Ivy League was represented, as well as Georgetown University and New York University.

The summit brought together students passionate about immigration reform and focused heavily on the Development, Relief and Education of Alien Minors (DREAM) Act. If passed, the bill would grant conditional permanent residency to undocumented students who were brought to the United States before the age of 16, under the condition that they graduate high school and complete either two years of higher level education or two years of military service.

The first pan-Ivy summit on immigration reform, the conference reflects growing advocacy efforts regarding the DREAM Act at several colleges and universities across the country. The DREAM Act was first introduced to Congress in 2001 and was most recently reintroduced in May, but has not been successfully passed into law.

“Our hope is to form a more formal coalition among all the Ivy League schools that already do DREAM Act advocacy independently,” said Nicolas E. Jofre ’13, one of the main summit organizers and co-director of Harvard College Act on a Dream. “This was the first time this has ever been attempted, and the fact that we had representation from every school was a huge deal.”

Organizers said they were surprised to find that student groups at other colleges and universities have also been active in advocacy efforts.

“A lot of the students who showed up were very passionate, and we discovered that there’s a lot more activism going on than we originally anticipated,” said Melissa V. Perez ’13, co-director of Harvard College Act on a Dream.

Many participants were drawn to immigration reform advocacy due to their personal ties with affected communities.

“The issue of immigration is something that has been very personal to me. I come from a community that is highly Latino in terms of demographics,” Perez said. “I have a lot of family members and close friends who are directly impacted. I have a stake in it in that sense.”

The conference featured Pulitzer Prize winner Jose A. Vargas, a journalist who has written for the Washington Post and the New Yorker, among other publications. Earlier this year, Vargas revealed publicly that he is undocumented, and he has since been active in immigration reform advocacy. During the panel, he stressed the importance of reaching out to those who do not support paths toward legalization for undocumented residents.

“I felt like we had a lot of conversations that aren’t generally addressed in DREAM activism,” Perez said. “Jose A. Vargas talked about how activism often preaches to the choir—that’s a conversation that isn’t often had.”

While participants felt the conference was a success, organizers said this is only the first step in accomplishing Act on a Dream’s broader goals.

“We realize there’s a lot of work that still needs to be accomplished,” Perez said. “But we all have resources in the Ivy League that are huge privileges [that we can use] for that purpose.”