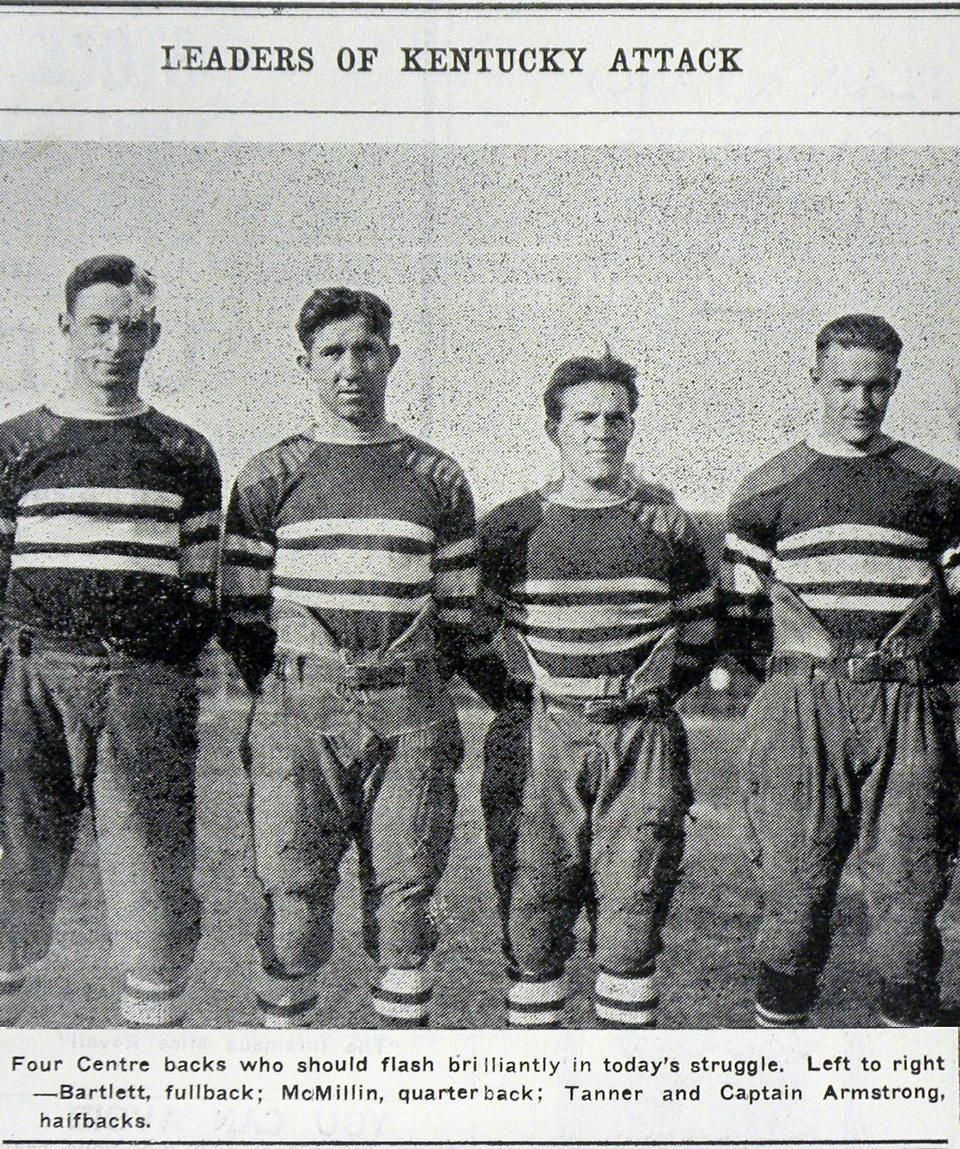 In 1921, Harvard lost to Centre College, 6-0, despite the Crimson’s undefeated streak dating back to 1916. It is still considered one of the biggest upsets in college football history.
By E. Benjamin Samuels, Crimson Staff Writer

When the Harvard football team kicks off against Dartmouth tomorrow night at 6 p.m., both teams will be making minor history. It’s the first time that the Crimson has ever played two night games at Harvard Stadium in the same season, and it is the Big Green’s second game ever under the lights.

But few beyond the most fanatical football history buffs know the historical significance of tomorrow’s game.

Ninety years ago to the day, playing at the same stadium, Harvard hosted Centre College, a small school from Danville, Ky.

Coming into that 1921 matchup, Harvard hadn’t lost a game since 1916, excluding exhibitions during World War I that generally aren’t counted as official. The Crimson was just about two years removed from its first and only Rose Bowl win in 1920, and the team was still at the top of the football world.

A week before that game, Harvard tied Penn State, 21-21. Despite signs that the Crimson might not be as strong as it had been a year prior, no one in Boston gave the tiny school in Kentucky a chance.

It was an embarrassing loss for Harvard. Alumni and fans alike expressed both shock and frustration in the defeat at the hands of the Centre Praying Colonels.

“Centre College triumphed because they outrushed, outpassed, and out-maneuvered their Crimson opponents,” said R. B. Wigglesworth, class of 1912 and member of the football advisory committee, to The Harvard Crimson the Monday after the game. “If victory is to be achieved over Princeton and Yale the team must demonstrate on the field a complete reversal of form.”

The Crimson’s sub-headline captures the school’s sentiments on the game: “Raging Kentuckians Humble University Team by 6 to 0 Before Packed Stadium Crowd.”

Bo McMillin, Centre’s quarterback and a consensus All-American, scored the team’s lone touchdown, and he became an icon in the state of Kentucky for it.

The 1921 Harvard-Centre game is remembered as one of the all-time major upsets in the history of college football, and the Associated Press called it the greatest upset in all of sports in the first half of the 20th century.

Even today, it is still considered one of the most shocking victories in the game’s history, on the same level as Appalachian State’s stunning 2007 win over Michigan.

“Centre admired the boys from Harvard … but they also wanted to beat them so they could enter into the level that Harvard was playing,” said Robert Robertson, a Centre graduate and author of a book on the Centre football team in the early 1920s. “During that era, Harvard, Princeton, and Yale were the powers. They were the Big Three. From the conception of the game in 1869 until the early ’20s, the big powers were in the East.”

Though Centre’s win over Harvard on Oct. 29, 1921 stunned the University and sent ripples through the college football world, it may not have been the great upset that everyone assumes it is.

Though it was a small school with hardly any history of football prowess, the team developed into a national power almost overnight.

“It was a very unique situation in that they burst upon the scene out of nowhere to become a major school, and then just that quickly disappeared,” said Kent Stephens, museum curator and historian at the College Football Hall of Fame. “If you look at the best teams in the nation in, say, 1919, Centre would probably be in the top five. So the upset against Harvard in 1921 … is not nearly as extreme as you think it would be.”

Centre College stumbled onto gridiron success as much as it created it. It’s a story that begins with Robert Myers, known better as “Chief.”

Myers, a Centre graduate, was a high school football coach in Texas, a job he landed without much prior experience in the game. After a few years at the helm at the Dallas school, the coaching job at his alma mater opened up, and, despite a lack of any experience at the college level, he was offered the job.

When he left Texas, he brought some of his graduating seniors along with him. One of those seniors was McMillin—the hero of the Harvard-Centre game.

But Myers quickly realized that he was not qualified for the job, so he hired Charley Moran, a Major League Baseball umpire, and promoted himself to a position something like an athletic director today.

Even after the switch, Myers remained the visionary behind Centre’s program.

The Praying Colonels quickly rose to power late in the 1910s, and by 1920, the team had a game with Harvard on its schedule.

Coming off a 7-6 win over Oregon at the Rose Bowl, Harvard was slated to face Virginia, Princeton, Yale, and other tough opponents during its 1920 campaign.

Its first game against Centre was not expected to be much of a contest. On Oct. 23, 1920, Harvard beat Centre—spelled “Center” in programs—handily, 31-14. The game was tied going into the half, but the Crimson had little difficulty coming away with the win.

After the loss, Centre completely shifted the focus of the program.

“Coming into the ’21 game, Centre for an entire year had keyed its whole program to going back and beating Harvard,” Robertson said. “It just became one of those missions for the school and for the boys.”

The Praying Colonels did just that. When Centre came back to Cambridge in 1921, both teams were undefeated.

Though The Harvard Crimson acknowledged that the Colonels were greatly improved from the 1920 team, the newspaper never gave the team a real shot.

“The southerners enter the struggle today with odds, as far as actual victory is concerned, against them,” The Crimson wrote in a preview of the Harvard-Centre game. “Centre undoubtedly has a stronger combination than that which faced the Crimson last fall. This fact, however, does not necessarily imply that the southerners have as powerful a team as the Penn Staters.”

Once again, the two teams went into halftime tied, 0-0. But this time, the Centre defense continued to stifle Harvard’s offensive efforts, and a touchdown from McMillin was all the offense the Praying Colonels needed.

For Centre, it was—and probably still is—the biggest win in the history of the program.

All around the tiny town of Danville, people celebrated with what became an iconic set of four symbols: C6H0. Centre 6, Harvard 0.

The signs popped up all around the town, and, even 90 years later, a few of the original markings still exist.

“[C6H0] was anyplace you could reach with a paint bucket and a brush,” Robertson said. “It was on the front of the main administrative building … Every building, every store window, [and] many of the houses had C6H0 written on them.”

Both schools had a few more seasons as national contenders, but the game came at the tail end of dominance for the Ivy League and for Centre.

According to Centre’s athletic website, the school has offered the Crimson rematches on a number of occasions, including as recently as the 75th anniversary of the game.

But Harvard has declined every one of the invitations from Centre, now a Division III athletic program.

According to Robertson, the two were engaged in serious talks of a rematch at the 50th anniversary of the game, with both sides expressed interest. Logistically, it didn’t work out, and the potential Harvard-Centre matchup was dropped.

These days, the Crimson rarely plays teams outside of the Ivy or Patriot Leagues. There are exceptions—for the first time, the team plays the University of San Diego of the Pioneer Football League next year—but these matchups are uncommon.

Alumni with a connection to a game, like Robertson, remain hopeful that the two teams could meet again in 2021. But with the discrepancy in the caliber of play so great between Division III and the Football Championship Subdivision, the chances of a reprisal between these long-forgotten rivals grow increasingly unlikely.

“If we can occasionally get an Army, Navy, or an academic school like Duke, that would be great,” Harvard coach Tim Murphy said. “But [to play Centre] wouldn’t make a lot of sense. … Nothing to gain and everything to lose.”