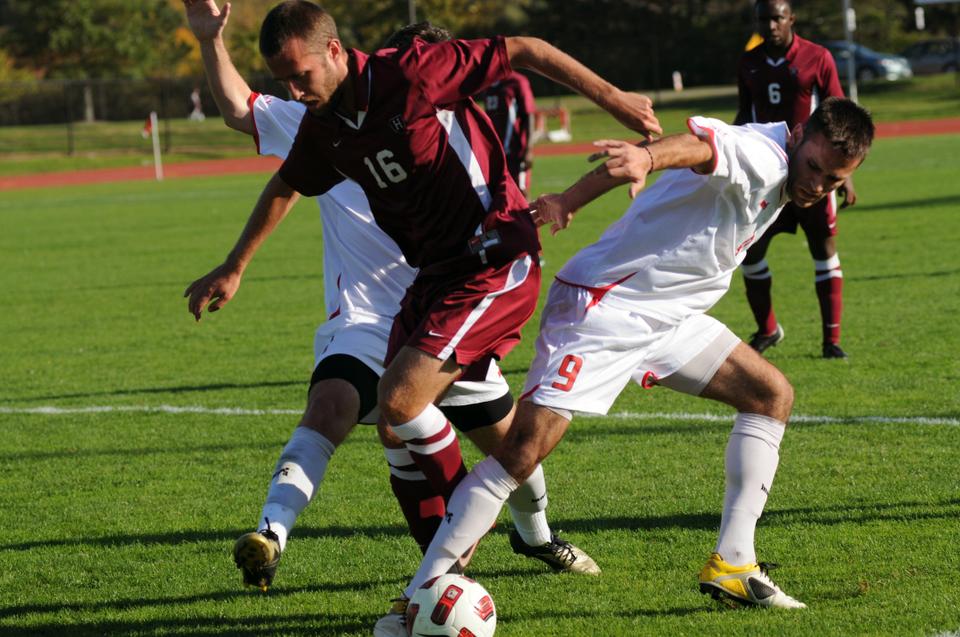 It will be a long drive back from Ithaca for the Harvard men’s soccer team tonight.

Although the Crimson (2-7-1, 0-2-0 Ivy) entered the second half with a 1-0 advantage over Cornell (6-1-3, 2-0-0), the Big Red needed only fifteen minutes to notch three consecutive goals, taking back the lead to come away with a 3-1 victory Saturday afternoon.

“The result was a little bit disappointing,” senior co-captain Tim Linden said. “We performed well for parts of the game and really underperformed for parts of the game. We can’t fault anybody for effort, but it comes down to being sharp mentally and physically and taking care of the job, which we weren’t able to do for 90 minutes.”

Harvard started out strong in the first half, shutting down the Cornell offense and creating several scoring chances. After 32 minutes of play, sophomore defender Ross Friedman sent a free kick into the box, and sophomore defender Oblajulu Agha collected the ball and finished the opportunity to put the Crimson on the scoreboard and enter halftime with the lead.

But after the first fifteen minutes of the second half, Harvard's lead had disappeared. The Big Red targeted the center of the Harvard defense, capitalizing on breakdowns to put the ball away. Tying the game off a breakaway less than three minutes into the half, two more goals quickly followed, and the Crimson was unable to come back from the deficit in the remainder of the period.

“We entered into halftime with a lot of confidence,” Harvard coach Carl Junot said. “We thought we had done well and had executed our game plan… If I look at the game as a whole, it was probably 75 minutes of a decent performance to our team. There were those 15 minutes where, for whatever reason, we couldn’t figure out the center of our defense, to the credit of Cornell, who was very good with [targeting] it.”