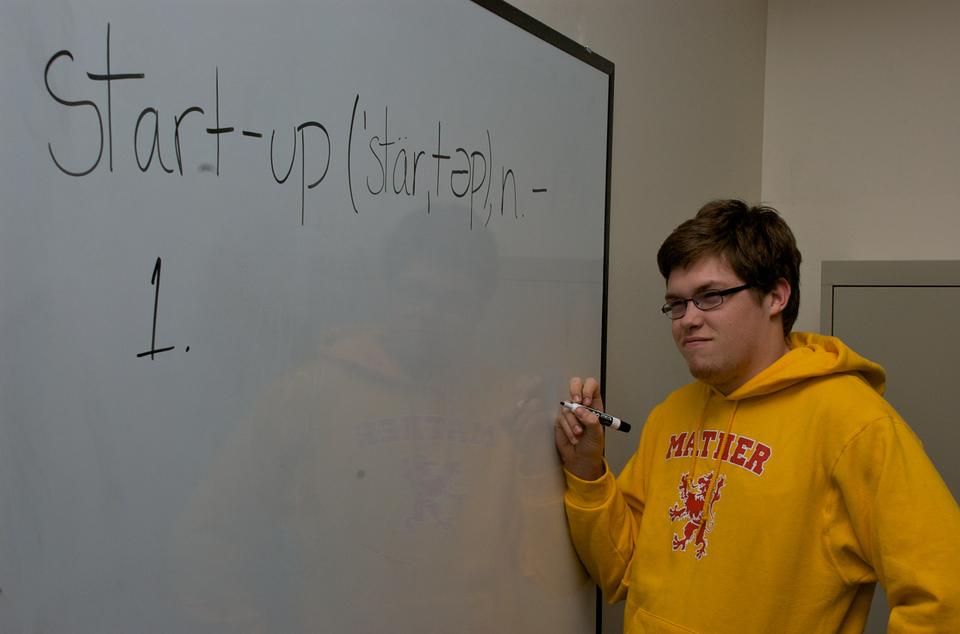 Anthony A. Palillo '14 illustrates the confusion associated with the difficult task of defining the constantly evolving term, "start-up," in the New Media Room of Mather House.
Advertisement
Advertisement

In and Around Language: What's Up with "Startup"?

With or without the hyphen, the word “startup” is as puzzling as it is ubiquitous.
By Kevin Sun

With or without the hyphen, the word “startup” is as puzzling as it is ubiquitous. The Oxford English Dictionary Online defines it as “a business enterprise that is in the process of starting up,” usually as applied to a “startup company.” That seems about right—but is the media misusing the phrase when referring to Facebook, which was launched in 2004 and has long since finished “starting up”?

“People refer to Facebook as a startup—that’s not accurate,” says Andrew J. Rosenthal, an MBA student at the Harvard Business School who cofounded the Startup Tribe, a campus group for student entrepreneurs seeking to launch new businesses.

“I visited Facebook’s headquarters in a rental car, and I found out that they had valet parking. If you have valet parking, people shouldn’t call your business a startup,” says Rosenthal.

For the moment, it seems, the startup is increasingly associated with tech-based companies—even those that are now well-established—because those are often the most successful and the most visible. Yet that visibility itself depends on more than just success. Entrepreneurship has been around forever—what makes calling something a “startup” so special?

The OED traces the origins of the term, used in its modern sense, back to a 1976 Forbes article, which uses the word as follows: “The ... unfashionable business of investing in startups in the electronic data processing field.” A 1977 Business Week article includes the line, “An incubator for startup companies, especially in the fast-growth, high-technology fields.”

Startup also has digital associations, as in “startup menus,” “startup processes,” and other “startup” computer-related phrases. Wikipedia mentions that startup businesses often have “low bootstrapping costs”; that is, founders of a business fund their venture using their own capital rather than external capital. Bootstrapping comes from the phrase “to pick yourself up by the bootstraps,” which is also where the term “booting up” a computer comes from. Wikipedia explains that “boot” is a shortened version of “bootstrap load,” the process by which the computer starts up by reading a bootstrap sequence that tells the computer how to load in its own operating system.

It should be noted that startups needn’t be tech-based or web-based, but these technological associations hint at one reason why startups are so popular: anybody can start their own. In Rosenthal’s words, technology has had a “democratizing effect” because it has reduced the amount of money and capital needed to start a business. Meritocratic overtones are a part of the very etymology of the word—nobody gets their bootstraps pulled up for them.

According to Google N-Grams, a service that measures the frequency of a word’s use within Google’s collection of scanned books, the usage of “startup” steadily rose in the 90s and then peaked around 2002—that is, shortly after the spectacular burst of the “dot-com bubble” of the late 90s and early 2000s. “Startup” appeared less and less frequently between 2002 and 2008; the N-Grams tool doesn’t show any data from 2008 to the present.

“Startup” was being used less and less in books in the time when blogs and online media newly embraced the term in reference to a second generation of internet-based ventures, the most prominent being Facebook. For some reason, in the wake of the 2008 financial crisis, startups became increasingly popular.

“I am a huge believer in the idea that starting during a downturn is the best time to start,” says HBS Senior Lecturer Janet J. Kraus. “Opportunity costs are low, and if you’re able to turn a profit in a down market, then you will be very profitable when markets recover.”

Kraus co-teaches “Founders’ Dilemmas,” a course that addresses the challenges of starting a company, and says that cost is also an issue when considering the popularity of the startup. Kraus’ first website in 1996 cost $400,000 to create—not only because it was being built from scratch, but because a great deal of money had to be spent marketing the website and educating people about the Internet.

“You had to explain to people that the Internet existed, that there was something called ‘dial-up’, that you could buy stuff online, and that doing so was secure,” says Kraus.

Another major difference between now and then is differing attitudes towards entrepreneurship and towards other business-related paths like finance, consulting, and management—partially a result of the Great Recession. Creating complicated derivatives and working to “lubricate” capital flows might seem less appealing to a generation that has seen the dangers of volatile financial markets.

“The crash of 2008 disillusioned a lot of people looking at those types of careers,” says HBS Professor Thomas R. Eisenmann ’79. Creating something from nothing, on the other hand, might seem more appealing now than before. “If you stand back and look at what your generation wants to do, building something new is [considered] fundamentally pretty cool,” Eisenmann says.

The most successful startups have also proved to be inspirational for many college-aged young adults—who wouldn’t want to be as famous and successful as Mark Zuckerberg?

In an email, HBS Professor Noam T. Wasserman cites “role models” as a major cause for the recent trending of startups: “Founders who have recently captured the public’s imagination—e.g., Jobs, Gates, Zuckerberg—have helped fire the public’s imaginations about how founders can impact the world and inspire people to think about entrepreneurship as a viable path to a rewarding life.”

Wasserman includes a note of caution, however. “At the same time, the public’s focus on those phenomenally-successful founders can cause unexpected perils for those who are less prepared for the challenges of entrepreneurship but try to imitate them nonetheless,” he says.

“Entrepreneurs embody the promise of America: the idea that if you have a good idea and are willing to work hard and see it through, you can succeed in this country. And in fulfilling this promise, entrepreneurs also play a critical role in expanding our economy and creating jobs.”

Startups aren’t just cool or trendy, then: they’re American, too. In a time when American populism appears to be on the rise, and when the Occupy movement gains momentum against its alleged “one percent,” the current popularity of the startup can be no coincidence. “When the big-picture economy looks so bleak and a select group has really flourished,” says Rosenthal, “startups hold a lot of promise.”