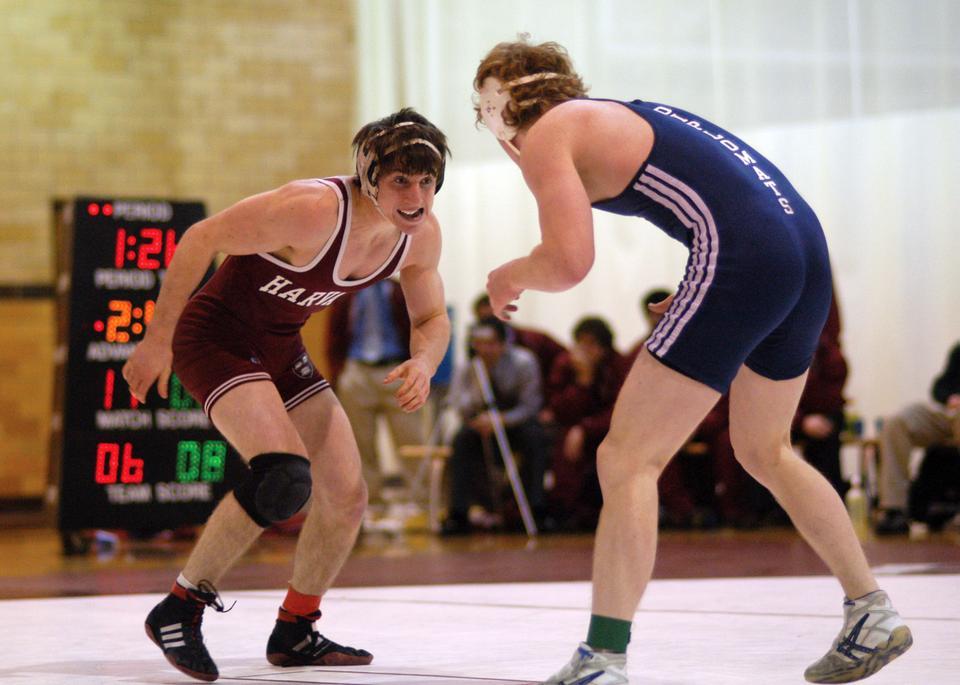 A National Champion in 2010, J.P. O’Connor ’10 has returned to campus to serve as an assistant coach while training for the 2012 Olympics. He had previously been planning on applying to medical school.
By Steven T. A. Roach, Crimson Staff Writer

He won an NCAA Championship at 157 pounds. He garnered a 132-16 record over his four years in a Harvard singlet. He never dropped a single bout in his senior year en route to a 35-0 record. He has arguably had the most successful career as a Harvard wrestler. And now he’s back for more.

This time, J.P. O’Connor ’10 has returned to the Harvard wrestling program as an assistant coach. But before O’Connor made the decision to return to the squad in this new role, he had to undergo a difficult path, one that was both unfamiliar to him in certain ways given his recent success at the collegiate level and familiar to him because of the dedication to wrestling he had to put in to achieve the level of success he has today.

When O’Connor graduated from Harvard in May 2010, he was originally planning to apply to medical school and eventually become a doctor. But his focus for the immediate future started to shift back toward accomplishing even more in wrestling and O’Connor decided to trade in his scrubs for a singlet to train for a spot on the 2012 U.S. Olympic team.

Although O’Connor was accustomed to being at the top of the pack, he now found himself in a position in which he had to work his way up the ranks of the U.S. freestyle circuit.

One of the toughest challenges for O’Connor has been getting used to the new rules and format of international freestyle wrestling that differ from collegiate wrestling. But like in his career at Harvard, the Oxford, N.Y. native has only worked harder in the face of these challenges, watching hours of video to improve and learning key aspects about each one of his opponents’ styles.

While O’Connor has had success in his pursuit, he has also had his share of setbacks. At the U.S. Open in April, he suffered a right knee injury and tear in his ACL, as well as bone bruising. Before he could fully recover, O’Connor decided to compete in the World Team Trials. O’Connor lost in three periods against Kyle Dake, a Cornell junior with two NCAA championships to his name, one at 141 lbs in 2010 and his second at 149 lbs. in 2011.

“I think last year, it took me a little while to make the transition and have some success with it,” O’Connor said. “I did have success and it was a good year, but going from being 35-0 and winning a national title to not winning every tournament I enter, it was definitely humbling, but more than that, it’s a new challenge.”

With spare time on his hands in his quest toward qualifying for a spot on the 2012 U.S. Olympic team, O’Connor was looking for a way to better spend his time. When a former Harvard assistant coach decided to take a position at Boston University, the opportunity opened for O’Connor to fill the role.

The new position as assistant coach allowed O’Connor to focus on his training while helping the Harvard wrestling team to improve, the same way that others had helped him to work toward his goals while on the team, and travel with the squad when he was not training. For O’Connor, one of the defining aspects of the Harvard wrestling program was the focus on the values of hard work, character, and family.

“Anytime we can bring someone like J.P. onto our staff makes it that much better,” Harvard coach Jay Weiss said. “He knows what Harvard is about and the program.”

Just as Jesse Jantzen ’04, an NCAA Champion himself, was an inspiration to O’Connor when he was moving up the ranks in college, O’Connor has proven to be an inspiration for the current members of the wrestling team.

“I would say that J.P. is the Jesse Jantzen of the current Harvard wrestling team,” junior Steven Keith said. “Overall, he’s a phenomenal person and leads by example … He cares a lot about wrestling and each of us as people and is willing to do everything in his power to make us the best wrestlers we can be.”

The former NCAA Champion is still not sure what the future holds, but his mix of passion, hard work, and determination in his past has served him well.