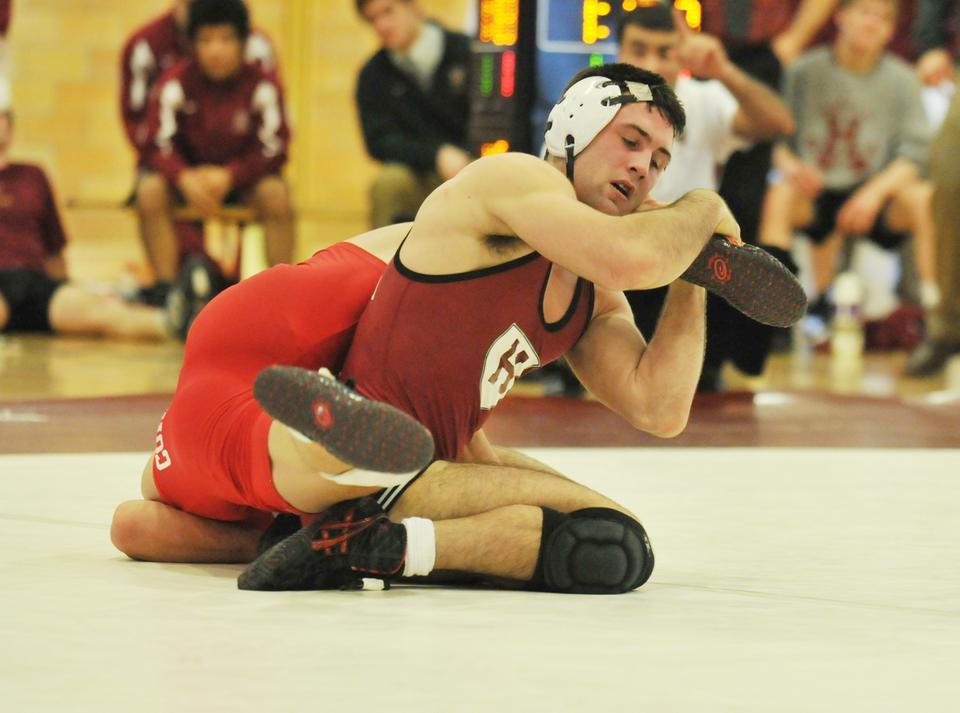 Shown here in earlier action, junior Walter Peppelman took three consecutive matches to emerge the champion of the 157-pound weight class on Sunday at the Keystone Classic in Philadelphia, Penn. The co-captain defeated foes from VMI, Appalachian State, and Princeton en route to the title.
By Steven T. A. Roach, Crimson Staff Writer

On Sunday the Harvard wrestling team competed at the Keystone Classic in Philadelphia, Penn., where the squad’s top performers showed their opponents anything but brotherly love.

The Crimson placed five members of its squad within the top six in their respective weight classes, with co-captain Walter Peppelman taking the title at 157 pounds, and junior Steven Keith and sophomore Cameron Croy dropping close title bouts to both take second place at 133 pounds and 184 pounds, respectively. Harvard earned fifth place out of 11 squads in the overall team standings.

After mustering a third-place finish at last weekend’s Binghamton Open, No. 1 seeded Peppelman rebounded to defeat No. 3 Dan Kolodzik of Princeton. In the final matchup, Peppelman took an early 2-0 lead and never looked back, eventually shutting out his opponent, 3-0. Throughout the day, Peppelman gave up just one point in his three matchups.

“He did a great job,” Harvard coach Jay Weiss said. “He looked good, and he looked strong. In the finals, he controlled the match ... and he wasn’t getting threatened much.”

Earlier in the day, Peppelman received a bye in the first round as a result of his seeding before earning an impressive fall just eight seconds into the match against Virginia Military Institute’s Ted Gottwald. After his quick finish, Peppelman earned a 4-1 decision against No. 5 seed Chip Powell of Appalachian State, who had pinned his first opponent at the 0:40 mark and earned a technical fall in his second-round bout. Peppelman’s three wins brought his collegiate career record to 70-27.

Similarly to Peppelman, No. 2 seed Keith finished in third place last week, but the 133-pounder went one better this weekend, falling in the championship match to No. 1 seed Brian Ortenzio from Penn after being put in an early hole.

“Compared to last weekend, I feel like I just moved significantly better on my feet,” Keith said. “I opened up and just wasn’t nervous about anything. I just went out there and wrestled as hard as I could, and it helped me get one spot better.”

Ortenzio got out to an early 2-0 lead with a takedown, but Keith responded with an escape to bring the score back to 2-1. In the second period, Ortenzio earned a pair of back points to increase his lead to 6-2. Despite Keith’s best efforts to make a comeback, Ortenzio held on for a 6-5 decision over Keith.

The final Crimson squad member to make the finals was No. 2 seed Croy, who lost an overtime matchup to No. 1 seed Andrew Trotman from Appalachian State. The 184-pounder made quick work of his opponents in his first two matches, earning a 10-4 decision over Jon Hartley from Appalachian State and a 12-4 major decision against No. 6 Dan Santoro from Princeton.

In the final, Trotman pushed ahead for an early 4-1 lead, but down, 5-4, Croy gained a critical escape to tie the score and send the matchup into overtime after the third period. Despite the comeback for Croy, Trotman earned a quick takedown just six seconds into sudden victory to claim the championship at 184 pounds.

“It was frustrating just because I thought he wrestled good, smart matches throughout the first three periods,” Weiss said.

Other players who earned spots in the top six were unseeded freshman Joe Barbato and sophomore Paul Ligouri, the No. 3 seed, with both Harvard wrestlers securing fifth-place finishes at 125 pounds and 149 pounds, respectively.

Barbato won by decision in his first two bouts, but No. 1 seed Levi Mele pinned Barbato at the 1:46 mark in the semifinals. In the wrestlebacks, Barbato was pinned again at 1:36 against No. 3 seed Thomas Williams from American before earning a fall of his own at the 0:54 mark against Appalachian State’s Tony Gravely.

Ligouri made an impressive run to the winner’s circle at 149 pounds last weekend but had to settle for fifth place this time around.

In his first two rounds, Ligouri only gave up one point, picking up two major decisions against Appalachian State’s Russ Benner and Princeton’s Luis Ramos. In the quarterfinals, Ligouri lost a tough 7-5 decision to No. 6 seed Kevin Tao from American but pulled out the victory in the fifth-place matchup over No. 5 seed Savva Kostis of Appalachian State.