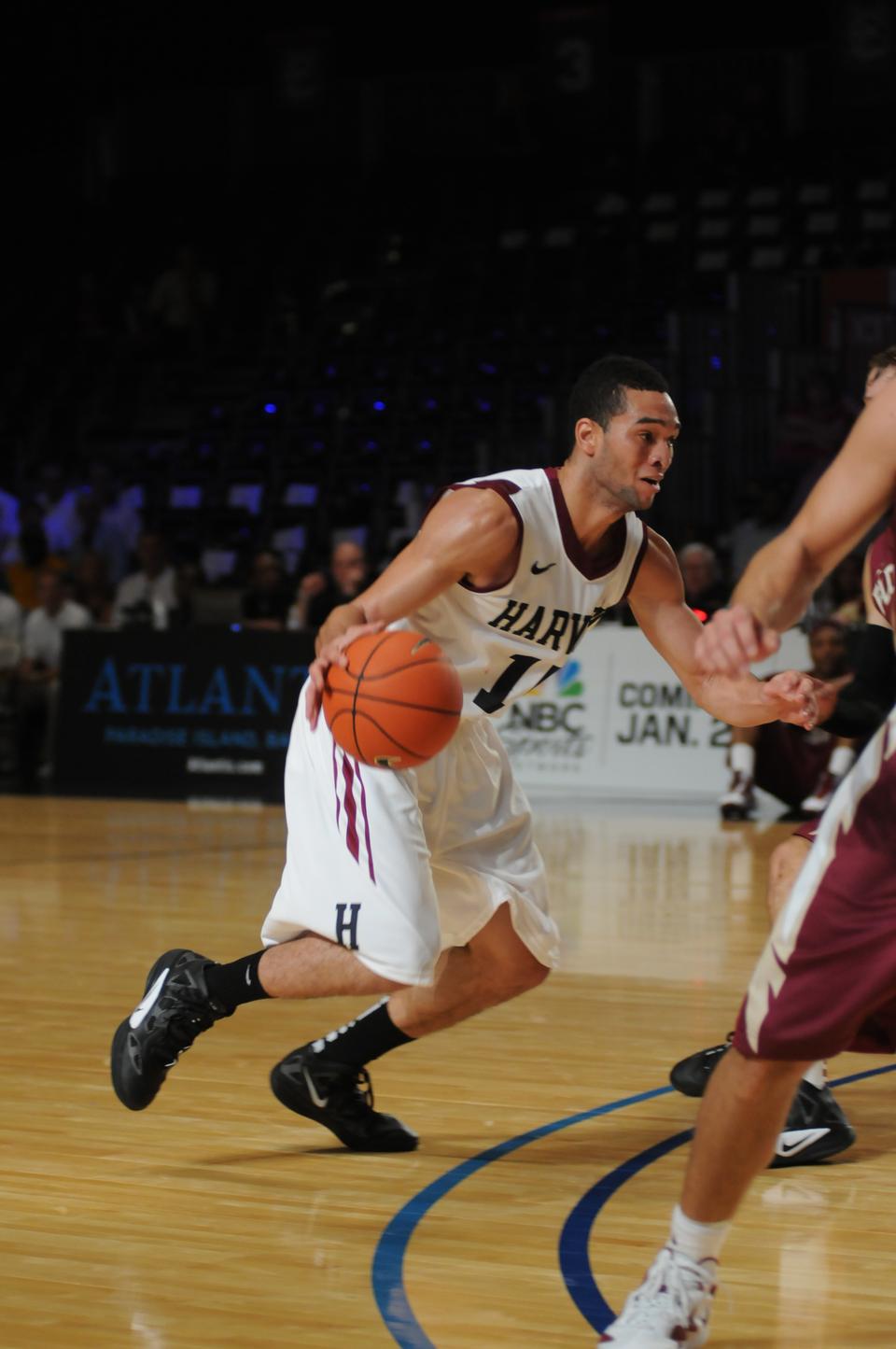 Junior wing Christian Webster nailed a three-pointer with four ticks left in the first half to tie Friday's game with Florida State at 14-14.
By Dennis J. Zheng, Crimson Staff Writer

PARADISE ISLAND, Bahamas—It came as no surprise that No. 22 Florida State—the nation’s top-ranked team in opponent field goal shooting percentage for the past two years—found itself locked in a defensive battle Friday evening in the semifinals of the Battle 4 Atlantis tournament.

More shocking, however, was the victor of the contest. Junior point guard Brandyn Curry had six points, five assists, and five steals to help Harvard upset the Seminoles, 46-41, and advance to Saturday's championship to face Central Florida, which upset No. 4 Connecticut earlier in the day.

“We are thrilled to be in the position we are–I don’t think I have ever seen a game like that,” said Crimson coach Tommy Amaker, who notched a victory over a Power Six conference team for the second time in as many days. “It’s hard to believe we came out on top against a nationally-ranked, outstanding defensive team like Florida State.”

Rapidly rising on the national scene after winning the school's first Ivy League title last season, the Crimson (5-0) out-worked and out-rebounded the veteran Seminoles (5-1), which lost for the first time since falling in the NCAA Sweet 16 in March.

“We got beat by a team today that was much hungrier than we were,” Florida State coach Leonard Hamilton said. “They played a much more aggressive game, they showed an awful lot of toughness, and they executed their system a lot better than we executed our system.”

The game’s only player to reach double digits in scoring, junior Michael Snaer had 10 points and Luke Loucks added eight points for the Seminoles, which were held 36 points below their season scoring average.

With the game knotted up at 16-16 five minutes into the second half, Harvard co-captain center Keith Wright scored his first points of the contest on a baseline slam dunk. Freshman Wesley Saunders followed his example with a two-handed jam to complete the 5-0 run.

Two consecutive turnovers by Crimson forward Kyle Casey then led to a pair of coast-to-coast layups for Florida State, which took a 24-23 lead at the 10-minute mark.

But a Harvard steal set up another dunk by Wright, who finished off a three-point play to retake the lead with 8:53 left.

A hard drive by Gibson then resulted in Wright’s fourth foul, but the Seminoles picked up no points after he missed both free throws, and a put-back was called off for basket interference.

Shaking off his 0-for-5 start from behind the arc, sophomore wing Laurent Rivard proceeded to drain a long three-pointer. After a layup by freshman Steve Moundou-Missi off a pass from Curry, another Rivard trey gave Harvard an eight-point lead at 8:12—its largest of the game up to that point.

Florida State regrouped and cut the deficit to three on a Bernard James layup with 2:33 left, but a left-corner three by Curry off a jump pass from Rivard made it 40-34 with under a minute to go.

“I just called for it,” Curry said. “[Rivard] made a great play in changing from his shot to finding me in the corner. Coach just says, ‘Step up and hit our shots.’ He preaches that all the time.”

Curry then stripped James in the lane and hit a pair of free throws to make it 42-34 with 43 seconds left, allowing the Crimson to complete the upset.

It didn't come easily, as the squads combined to go 8-of-47 (17 percent) from the floor. After Harvard guard Christian Webster hit a three-pointer with four seconds left in the first half, the halftime score was 14-14—tying the NCAA Division I record for fewest combined points in a half since 1986.