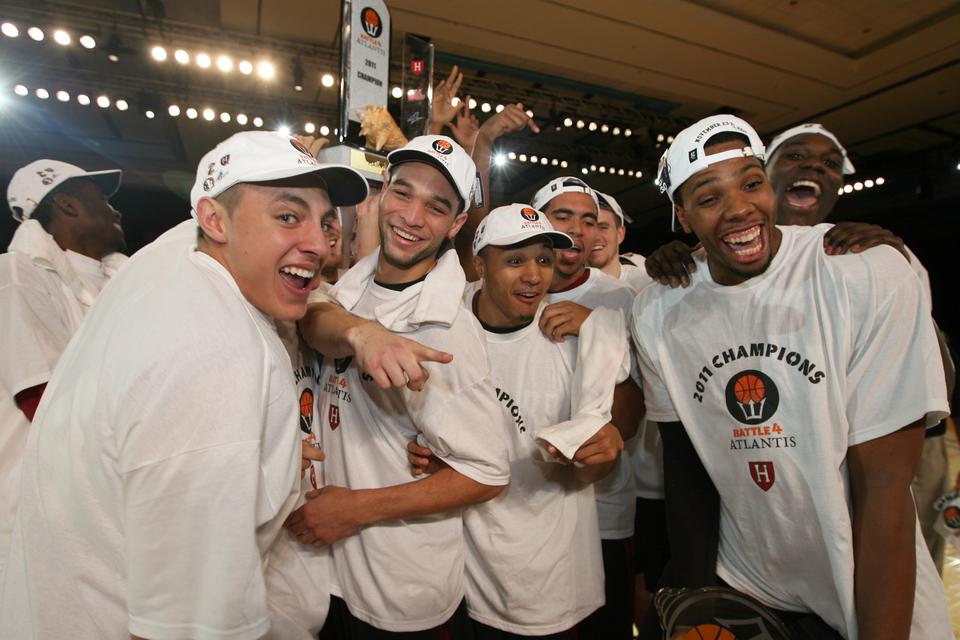 PARADISE ISLAND, Bahamas—For years, Harvard men’s basketball was nothing but an afterthought.

Ever since former Michigan and Seton Hall coach Tommy Amaker took the helm of the Crimson in 2007, expectations have steadily been rising. Harvard won its first-ever Ivy title last season and is the favorite to repeat this year and head to its first NCAA tournament since 1946.

Even so, few expected this.

Amidst an eight-team field that included No. 4 Connecticut and No. 22 Florida State, the Crimson emerged as the top dog with a 59-49 victory over Central Florida in the Battle 4 Atlantis championship on Saturday.

Junior forward Kyle Casey had 15 points and a season-high nine rebounds, and senior forward and tournament MVP Keith Wright added 12 points and seven boards for the Crimson (6-0), which upset the Seminoles, 46-41, on Friday and is off to its best start since 1984-1985.

“We’ve been building towards something like this,” Amaker said. “We’ve talked about and worked toward it, but we certainly needed to see it happen, and it certainly happened for us here.”

Opening the game on an 8-1 run, Harvard never trailed. After two layups by Keith Clanton cut the Crimson’s lead to 12-7, Harvard buried two three-pointers to establish a double-digit lead and went on to close the first half with a 10-2 run.

Casey finished the spurt with a tip-in of his own missed layup, helping his squad carry a 33-18 lead into the break.

The Knights (4-2) missed their final six shots of the half and were held to 33 percent shooting for the game.

“Our defense has been our calling card all season,” Amaker said. “I’m very proud and pleased with the way our kids have bought into that end of the floor. Our belief, our system, and our identity start with our defense.”

Keith Clanton had 12 points for Central Florida, which came back from 17 points down to beat the Huskies in Friday’s semifinals, 68-63.

Michael’s youngest son Marcus Jordan had 10 points but went 0-for-7 to start the game. Clanton and Jordan entered the game as two of the top four scorers in the entire tournament, averaging 24 and 18.5, respectively.

“We just didn’t do a good job finishing shots,” Knights coach Donnie Jones said. “We had some easy opportunities early on, and we got frustrated with ourselves because we weren’t scoring.”

The Crimson lead grew as large as 19 early in the second half on layups by co-captain Wright and freshman Steve Moundou-Missi. Casey and Wright struggled with foul trouble all game but managed to hold Clanton to 5-of-16 shooting and led Harvard to a 38-37 rebounding advantage.

“We wanted to have an inside presence established on both ends of the floor,” Amaker said. “It’s critical that we get [Casey and Wright] to lead the way for us around the rim—protecting the rim and also rebounding the basketball. Certainly they did a terrific job of that this afternoon.”

Two minutes into the second half, Clanton drained his only three-pointer of the night and Jordan scored his first basket on a fast-break layup, helping spark an 11-2 run that brought the Knights back within 10.

But Casey snapped a five-minute scoreless stretch for Harvard with a baseline runner and a drive to the basket to pull the Crimson back up by 14.

“Thank goodness we had the cushion that we had,” Amaker said. “Our toughness down the stretch and belief in what we were doing ... was critical for us.”

The Knights’ hopes of a comeback were thwarted by their own struggles at the charity stripe. Central Florida went 8-for-23 from the free throw line.

And while Harvard went cold from the floor—hitting only four field goals in the second half—Central Florida could not keep its opponent off the line, where it made 23 of 35 free throw attempts for the game.

A layup by Isaiah Sykes cut the deficit to 58-47 with 38 seconds left, but Casey hit two free throws and Central Florida missed a pair of late three-pointers.

The Knights turned 13 turnovers into 19 points and outscored Harvard in the paint, 34-22.