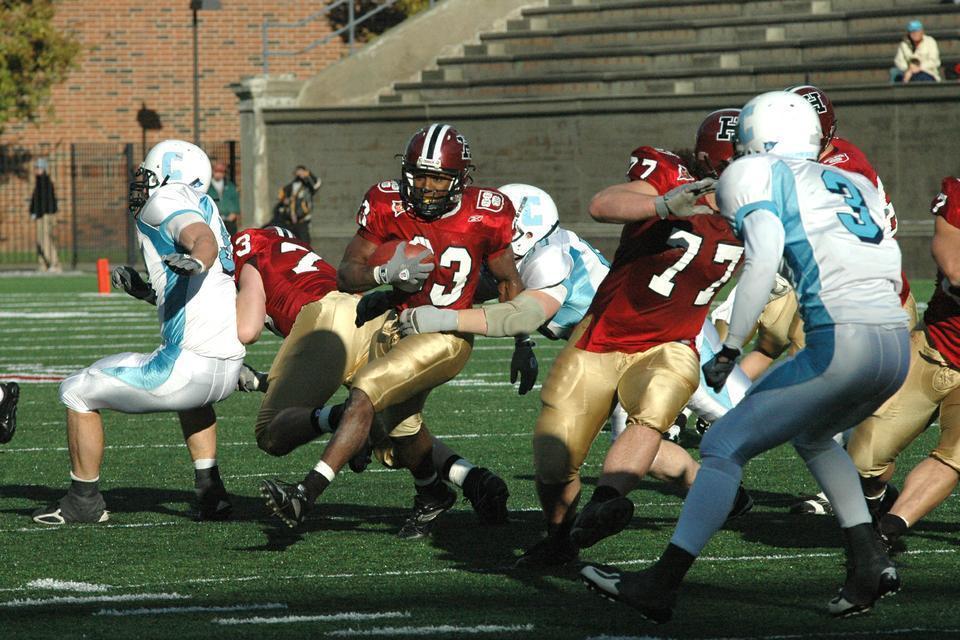 Former NFL running back Clifton Dawson ’07 has returned to the gridiron as coach of his Harvard Business School section’s flag football team. Dawson, who is the all-time leader in rushing yards in the Ivy League, decided not to play because he thought his team would have an unfair edge.
By Keith H. Bender, Contributing Writer

Dawson, who coached the HBS Section G flag football team this fall, is a student in the Harvard Business School working towards an MBA with a general management focus.

“I’m learning a lot about what I’m interested in—working with teams and building teams and focusing on how that passion translates into a career in business,” Dawson said.

Dawson’s return to Cambridge marks the latest stop in an unusual journey that has taken the Ontario, Canada native to Northwestern, Harvard, Toronto, Indianapolis, Cincinnati, Houston, and Denver over the past eight years.

Dawson left the NFL in 2010 after playing for the Indianapolis Colts, the Cincinnati Bengals, and the Houston Texans. At the end of his career, he applied his unique background to an online management position at a major sporting goods retailer, and in July of 2010, he married his classmate and college sweetheart, Annelise.

The next stop after Harvard Business School is not yet determined.

“I don’t think you’ll find my name in the headlines,” Dawson said when asked where in the news his name will appear next. “Instead, I think you’ll find, hopefully, whatever company I’m working for doing really well.”

Dawson was drawn to HBS because of the similarities he sees between football and the world of business. The team mentality is what attracted Dawson, who also ran track at Harvard, to business in the first place.

“I think … the greatest challenge after playing football is figuring out how I can add value to a new type of team,” Dawson said.

Despite the difficulties, Dawson is well prepared, and he acknowledges that his athletic experience is valuable in a business environment.

“I realize that I bring unique skills to the table based on my experience playing on teams, seeing lots of different forms of leadership, from Ryan Fitzpatrick to Peyton Manning,” Dawson said. “I’ve come to learn a lot from them, [and] that’s translated to lessons about leadership and team dynamics.”

Though Dawson is looking to business in the long-term, he also wants to be involved in football as a coach—but not on a professional level.

“When I left the NFL, I said that I had no interest in being involved in the game,” Dawson said. “But football has represented about 20 years of my life, and when I got here, I realized that there are certain things about the game that I miss and that I am passionate about.”

In the future, Dawson sees himself coaching youth football. But for now, he faces the task of coaching his business school section’s intramural flag football team, an experience that he calls one of the most challenging of his life.

“I realized that I know a lot about the game, having played it for so long,” Dawson said. “But it takes a completely different set of skills to coach, and so this experience really let me try that.”

Dawson’s decision to coach the team is a testament to his desire to learn and gain new experiences. Had he simply wanted to win, of course, he could have just played for the team himself, but he admits that he thought it would be unfair to other teams to have to compete against a professional running back.

And he almost reached the pinnacle of HBS intramural glory in merely his first year. Dawson’s team lost in the championship game, but he is proud of how far his team progressed throughout the season.

According to the team’s quarterback, Patrick Griffin, the team began with very little collective football experience. Throughout the season, Dawson focused on teaching the players the skills of the game—and sharing his love of football.

“None of us are really football players, but we would spend an entire 45 minutes at lunch talking about flag football because we were so pumped up about it,” Griffin said.

For Dawson and his players, the experience was about more than just football. He saw the season as a way to bring his section together, and Griffin said that classmates are following his lead and sharing their personal interests and talents with the group. One person in the section is an art curator, for example, and has been teaching classes on the topic to his classmates.

Dawson, meanwhile, is eager to continue developing his coaching skills.

When asked if he would consider crossing the river and coaching intramural flag football at the college, Dawson laughed.