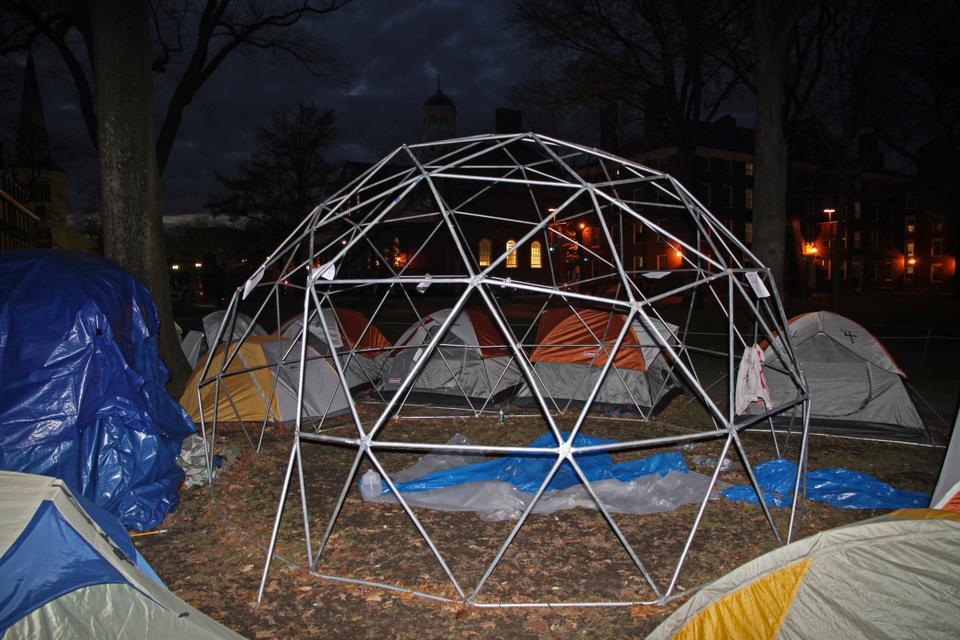 A geodesic dome stands at the center of the Occupy Harvard camp. While protesters are uncertain to what use they will put the dome, which was donated by supporters at MIT, they intend to cover and winterize the dome and use it as a semi-permanent structure.
By Justin C. Worland, Crimson Staff Writer

Organizers of Occupy Harvard have installed a metal dome that they may weatherize in coming weeks and point to the construction as symbolic of their intent to outlast the winter.

Rising above the tents in Occupy Harvard’s camp in the Yard, the dome’s frame was constructed over Thanksgiving break by a group of Harvard affiliates, and may be weatherized in the coming weeks to provide a more protected space that will survive the winter, the occupiers said.

“I think there’s an understanding that we’re here [in the long term] and that the dome will be a central part of that,” said Kavi Bhalla, a Harvard research scientist and tutor in Pforzheimer House who was involved with the installation of the dome. “I think it’s very much a symbol of permanence.”

The occupiers are currently considering a number of different methods to transform the frame into a shelter, including installing a plastic skin that would waterproof the dome and additional insulation to keep it warm, according to Bhalla.Another option includes turning the dome into a green house that would be heated by natural light. This approach would allow the walls of the dome to be transparent while maintaining warmth even in five-degree weather, said Timothy S. McGrath, a student in the Graduate School of Arts and Sciences.

The dome’s future is largely dependent on who decides to carry the plans forward. “We’re sort of waiting to see who jumps in and gets it started,” Bhalla said.

McGrath said that dome, which is 18 feet in diameter, could serve as the hub of the Occupy encampment.

“For me personally, the dome can be a universal space that can help sustain the occupation,” McGrath said. “I picture the dome being a community center [to spread the message] with or without the camp.”

While the future of Occupy Harvard remains unclear, protesters say that the dome is an important symbol of the movement’s intention to establish a lasting presence.

A group of Massachusetts Institute Technology affiliates donated the parts of the dome at the start of Occupy Harvard, but protesters waited until after Thanksgiving break to install it. The occupiers hoped that the dome would attract new attention to the movement, according to Bhalla.

The Occupy Boston movement is also in the process of winterizing its encampment in Dewey Square. A group of Harvard and MIT students led by MIT architecture Professor Jan W. Wampler has suggested potential solutions, which the movement is currently considering.

“My understanding is that the Occupy Boston people would like to stay there during the winter, and we’re trying to help them,” said Wampler. “But I think what we’re also trying to do is change the image.”

Wampler said he believes Occupy could benefit from a makeover that would include the creation of “more beautiful” structures that better convey a sense of permanence than tents.