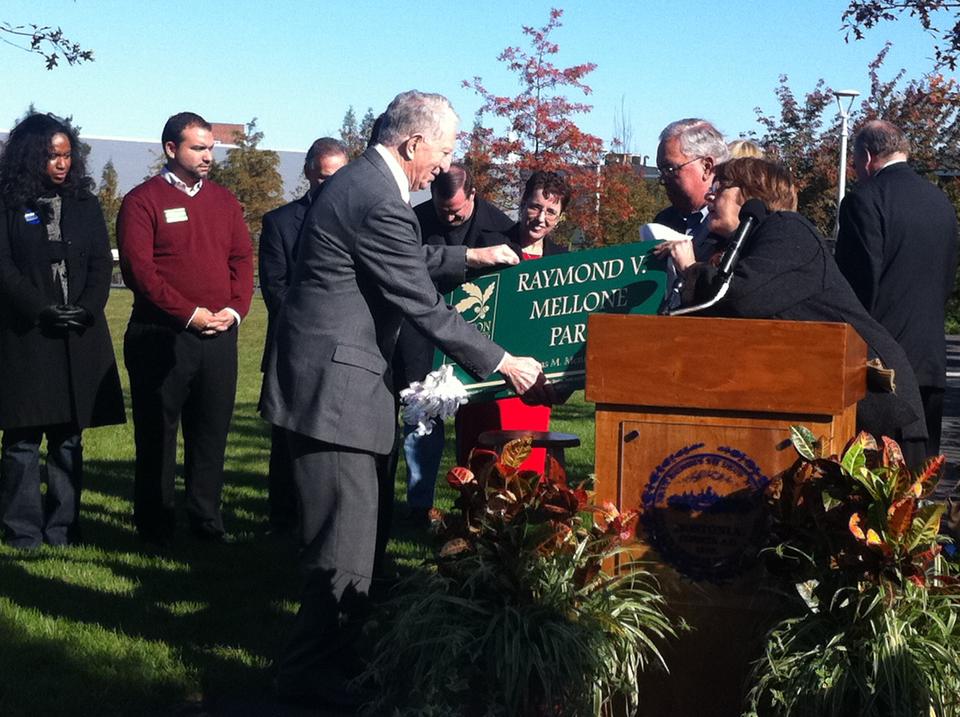 As tensions have erupted and tempers have flared over Harvard’s expansion into Allston, Ray V. Mellone, chair of the Harvard Allston Task Force, has played the role of wizened negotiator during numerous community meetings. In recognition of Mellone’s service to the community, the City of Boston renamed the newly-created Library Park after him on Saturday.

“It’s surreal,” Mellone said of the honor. “It’s nothing I ever anticipated, I couldn’t talk [the city] out of it.”

During the hour-long ceremony, city officials and neighbors lauded Mellone for his dedication.

“Too often we name these parks after people who have passed,” Boston Mayor Thomas M. Menino said at the dedication ceremony. “I am glad that future generations will forever know how much we respected you for making this community what it is today.”

Mellone, an 83 year-old Allston native, has contributed to the community in a variety of ways over the past 60 years, working as a Boston city planner for Boston, a former President of the Board of Directors for the Vocational Advancement Center, and a leader of the local Boy Scout Troop 5.

“Many of the hats Ray has worn, you don’t get paid,” said Boston City Councillor At-Large John Connolly. “You do it because you love the neighborhood. That’s the kind of guy Ray is.”

The park—which will now be called the Raymond V. Mellone Park—opened in July and was built behind the Honan-Allston Library on land that Harvard donated to the City.

The University also funded its construction in part.

Transforming this land from a vacant industrial lot to a lush green space is part of Harvard’s continued efforts to ameliorate the effects of pausing its development in Allston.

In Dec. 2009, Harvard halted construction on the Allston Science Complex—which had been touted as a $1 billion mecca for science research that would bring thousands of jobs to the neighborhood—much to the dismay of community members.

Since then, Harvard-Allston Task Force meetings have seen many tense exchanges between the University and local community, which Mellone has presided over with a level head, according to community members who attended the event.

“He wants to find a middle ground that benefits this community and Harvard,” said Mellon’s son Michael, referring to the Task Force meetings that his father has headed. “His dedication to his community is a sincere one.”

Paul Berkeley, president of the Allston Civic Association, said that Mellone’s foresight has served the community well as it has interacted with Allston.

Scott Matalon, president of the Allston Board of Trade, expressed a similar sentiment.

“It’s nice to see the community recognize individuals who work quietly without a lot of yelling and screaming and who just care,” Matalon said.

Mellone said that he is optimistic that the University and Allston community can work together more productively in the future.

But for Mellone, the park exemplifies the beneficial effects of Harvard’s involvement in Allston, and he said he hopes to spend his time there with his wife enjoying good weather and reading books.