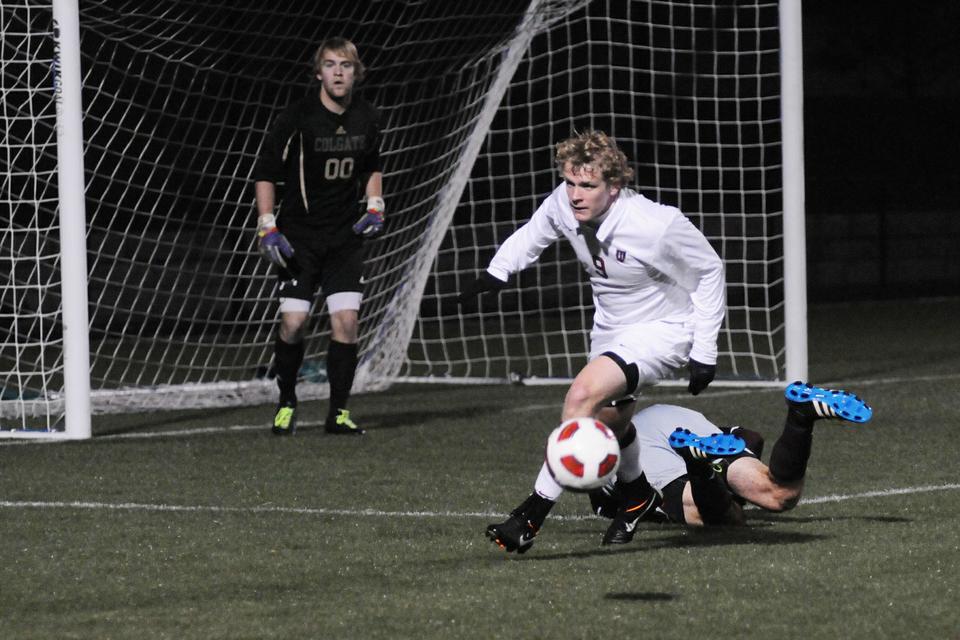 Shown here in previous action, sophomore forward Connor McCarthy scored in the 55th minute—his second goal in two games—on Saturday afternoon at Columbia, but Harvard could not find the net another time, falling to the Lions, 2-1, in the Crimson’s penultimate matchup of the season.
By Oluwatoni A. Campbell, Crimson Staff Writer

After failing to find victory in its last 12 outings, the Harvard men’s soccer team travelled to New York City this weekend in hopes of picking up its first Ivy win.

Though sophomore forward Connor McCarthy notched a goal for the second straight game, the pair of goals scored by Columbia’s Ronnie Shaban proved to be insurmountable for Harvard.

“It’s tough to lose,” McCarthy said. “We definitely didn’t play well in the first half, but our performance in the second half was good.”

Playing at Columbia University Soccer Stadium in Manhattan, N.Y., the Lions came out strong offensively, immediately placing pressure on the away side’s back line. Within the first few minutes of the match, Crimson senior goalkeeper Austin Harms was tested by Columbia’s offense. And in the 16th minute, the Lions’ relentless pressure caused the Crimson back line to crack.

At 15:34, Columbia midfielder David Najem fired a shot on goal that rebounded off the goal post and into play. As the Harvard defense attempted to clear the loose ball out of its penalty area, a Lions attacker went down in the process, leading to a penalty kick for Columbia.

Stepping up to the penalty spot for the Lions was Shaban, who summarily blasted the ball past Harms to give Columbia the early lead, 1-0.

After tallying its first goal of the match, the Lions showed no signs of letting up, as the Columbia offense continued to challenge the Harvard defense midway through the first half. A little more than 10 minutes after the first goal, Shaban scored another goal for Columbia, this time with a well-placed header to the back post off a corner kick by junior forward Nick Scott.

Suddenly down by two scores in the first half, the Crimson responded by increasing its offensive pressure for the remainder of the half.

With just seconds remaining on the clock, sophomore defender Pascal Mensah looked poised to cut down Columbia’s lead, but his last-second header floated just above the cross bar.

The start of the second period saw a change for the Crimson at net, with junior goalkeeper Brett Conrad replacing Harms.

Ten minutes into the second half during the 55th minute, the Crimson’s efforts finally paid off when McCarthy blasted a point-blank shot past Lions goalkeeper Alexander Aurrichio.

McCarthy’s opportunity was set up following a corner kick by sophomore defender Ross Friedman to junior defender Richard Smith, who then passed the ball to the waiting feet of McCarthy.

Buoyed by its first goal, the Crimson immediately regrouped in search of the equalizer.

With less than 27 minutes remaining in the match, Harvard looked to have completed that search when Schmoll unleashed a promising attempt on goal. But the freshman midfielder’s shot hit the crossbar and bounced back into play. Co-captain midfielder Tim Linden looked certain to knock in the rebound, but his shot flew wide of the net and out of play.

During the 74th minute, with Harvard taking a corner kick, Friedman launched a dangerous cross into the penalty box, but a foul was called on the Crimson before the ball could connect with the head of a Harvard attacker.

Harvard continued maintained its attack on the Lions’ back line for much of the second half, but despite its best efforts the Crimson was unable to finish any chances.

“Though we weren’t able to fully come back against Columbia like we did against Colgate, I think the last two games have shown our level of resiliency,” McCarthy said. “When we go down, we are good at picking each other up and trying to get back in the game and continuing to compete.”

With the victory, Columbia moves into a tie for third place in the Ivy League, and Harvard was sent back to Cambridge still in search of its first conference victory. The Crimson will attempt to grab its first Ivy win in its season finale against Penn Saturday.

“[Penn] is going to be another game where we enter it thinking that we are the better team and fully expecting to get three points from it,” McCarthy said. “Some of the results haven’t gone our way this year, but that hasn’t changed our mentality or the fact that we have a lot of quality talent on our team.”