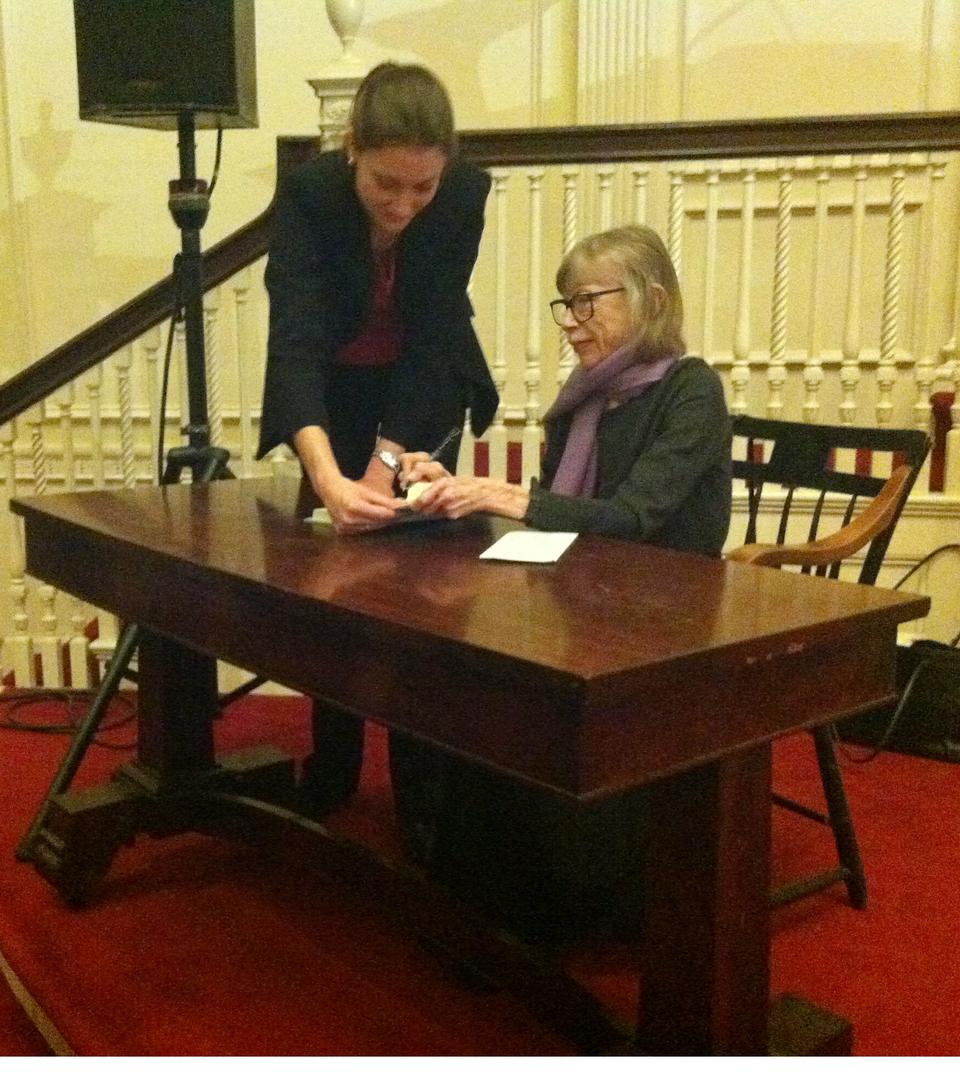 “You write so well, hard, and precisely about frailty,” he told Didion. “How do you reconcile this with your role as a powerful woman?”

Though Didion has been acclaimed as one of nation’s best writers of creative nonfiction, she demurred.

“I don’t actually feel that way,” she said. “That’s a lovely thing to say. Thank you.”

Didion spoke at a sold-out event sponsored by the Harvard Book Store at First Parish Church which was geared toward promoting her new book “Blue Nights.”

Lydon described the book, a memoir about Didion’s loss of her daughter Quintana Roo Dunne, as “a remarkably written book that seeks out and exposes the fault lines in the human condition.”

Didion, who received an honorary degree from Harvard in 2009, read several passages from the book and answered questions from audience members about her work and her mourning experience.

Her daughter died just weeks after Didion completed the manuscript of her memoir “The Year of Magical Thinking”—about her husband’s sudden death.

Didion replied that, unlike other authors, she sees no distinction between private and public narratives.

“There is no difference in my mind,” she said. “If you want to be a writer, you have to write for other people as well as yourself.”

Another attendee said in her question that she normally associates a “code of silence” with grief.

“Well, obviously I didn’t buy into this code of silence. I kind of—talked,” Didion responded, drawing laughs from the crowd.

“I was surprised by how funny she was. I really enjoyed it,” Julia F. P. Ostmann ’15 said.

A long line of people waited for Didion to sign their copies of her books after the event, hoping to speak to her about her experiences  and writings.

“She’s my favorite writer. She’s the only professional writer that’s ever made me cry,” Hayden Wright, a student at Emerson College, said after getting his book signed. “I like her candor, her sparse but elegant style of writing. She’s a very efficient writer”.

Attendee Susan Coyne, a graduate of Bowdoin College, said that she admires Didion’s work for “her precision.”

“Her writing is about absence. It informs her work as much as the words she chooses do,” Coyne said.

Asked whether she plans to write similar books, Didion said, “I don’t want to write any more memoirs.”

“I want to do something else. Maybe I’ll discover something,” she said. “Maybe it’ll be something about water. That’s always interested me a lot.”