In Modern Research, A Botanist’s Legacy 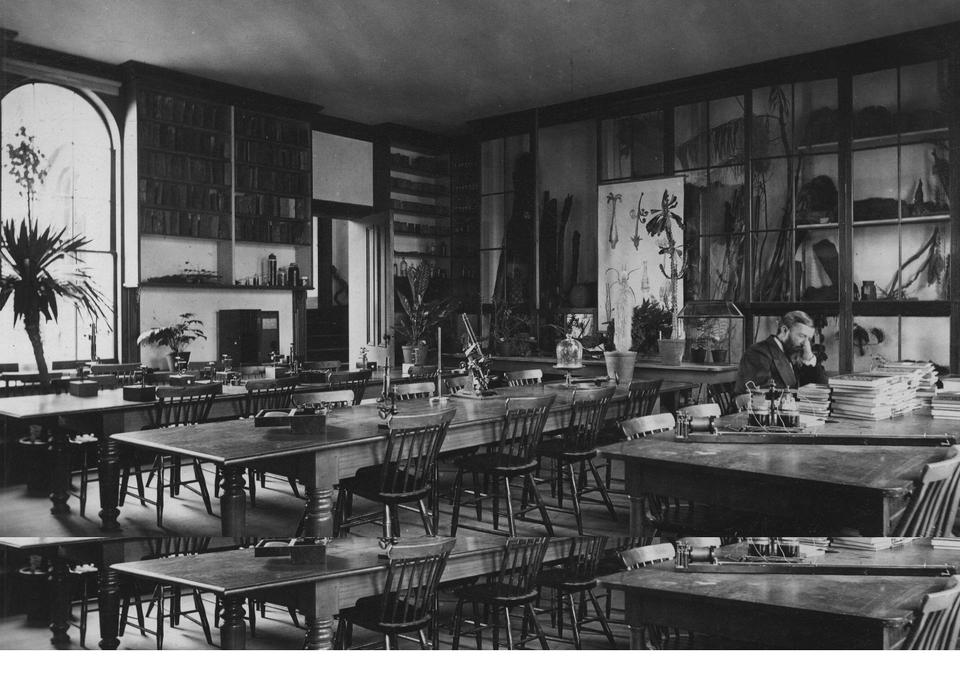 George L. Goodale, who became the first director of the Harvard Botanical Museum in 1888, analyzes plants in a laboratory in the Harvard University Herbaria.
By Julie R. Barzilay, Crimson Staff Writer

Asa Gray and Louis Agassiz started out as friends.

The two frequented the same natural history societies, spoke at the same popular Boston lecture series, and dined together at the Faculty Club in their early days as Harvard professors in the 1840s.

They worked just blocks from each other on campus, pioneering separate institutions that would shape Harvard for generations to come. But in 1859, a revolutionary idea sprouted across the pond—and irrevocably drove them apart.

When Charles Darwin published “On the Origin of Species,” Agassiz staunchly resisted the British scientist’s controversial theory—Gray, however, became one of Darwin’s most ardent proponents in America.

Their diverging opinions influenced the trajectories of each naturalist’s burgeoning project: Gray’s botanical haven on Garden Street sowed the seeds of Harvard’s evolution-oriented herbaria, while Agassiz designed the Museum of Comparative Zoology on Oxford Street with a non-evolutionary viewpoint in mind.

Both institutions have survived and thrived. But while the MCZ is a popular afternoon destination for families toting small children, the herbaria are frequented mainly by researchers. Gray’s role in enduring Harvard traditions—including the Harvard Summer School, which he founded 140 years ago—has faded from popular memory.

But a project digitizing Darwin’s letters has helped draw Gray and the herbaria back into the limelight.

“We think of [Gray] as being a quiet old botanist,” says history of science professor Janet Browne, the general editor of the U.S. branch of the Darwin Correspondence Project. “But actually, he was a tremendous intellectual and activist in getting these ideas out and about.”

Those ideas he espoused bear fruit to this day in the Harvard University Herbaria, where scientists glean new knowledge from centuries-old specimens.

Gray’s herbarium, which relocated from Garden Street to Divinity Avenue in 1954, is today joined by four more Harvard herbaria that together house more than five million specimens—as well as state-of-the-art labs for analyzing them.

In addition, the copious historical documents stored in the herbaria’s libraries are pored over by botanists from institutions all over the world, as well as many historians of science.

Donald H. Pfister, the interim director of the Harvard University Herbaria, oversees the preservation and distribution of all these specimens. His office is a testament to the riches quietly accumulated over the years at the herbaria. A hat made of mushrooms, an enormous framed stamp featuring Gray’s visage (created for the bicentennial anniversary of his birth last year), and field guides with ornate covers all adorn his shelves. Pfister says that not only plants, but also personalities live on in the herbaria.

“We’ve all left little pieces of ourselves in the collections,” he says. “We’ve annotated, made notes, written labels. The ghosts are there, in a way.”

To this day, artist-scientists spend their days drying, mounting, and labeling new additions. In the mounting room, soothing music fills the air, and the tables are strewn with historic newspapers in which specimens were once wrapped. The team has been busy salvaging about 13,000 specimens that were damaged in a flood two years ago, a task which is now nearly complete.

Beyond the mounting rooms are cases upon cases of plant specimens—including an “economic botany” collection cataloging how plants have been used by mankind throughout history.

One of the herbaria’s foremost archival treasures is a first edition copy of “On the Origin of Species,” presented to Gray by Darwin himself and annotated by both of the legendary scientists.

“When it comes to people’s letters, you get a sense of who they are based on how they write,” says Woods.

In the case of Jane Gray’s letters, they paint a portrait of Gray as a sensitive man with a wonderful sense of humor, says Lisa A. DeCesare, the herbaria’s head of public services and archives.

“He had a talent for picking any flowers by the side of the road, and before you knew it, it would be a lovely bouquet,” DeCesare says, sharing details she gleaned from hours perusing Jane Gray’s correspondence. “You can know the dates and what people studied, but when you read the letters, you really get to know things they didn’t even know they were sharing.”

INCH BY INCH, ROW BY ROW

Long before the herbaria became home to millions of specimens and started loaning items to institutions worldwide, it was a simple garden in Gray’s backyard.

When Gray, originally a medical doctor, became professor of natural history at Harvard in 1842, he set to work soliciting plant specimens from all corners of the globe.

“He saw that the way to start a collection was to get other people to send you things,” Browne says. “He was very skilled at that—very charming. He saw himself as a centerpiece of a wide web.”

After making a few expeditions himself, Gray sent letters to reel in exotic specimens from regions like the South Pacific, Europe, and East Asia. These letters are stored in the Gray Archive at the herbaria—a collection of great interest to the Harvard branch of the Darwin Correspondence Project because it contains Gray’s myriad exchanges with Darwin.

Of particular import to Gray was a series of specimens sent from Asia: when he compared Japanese flora to seemingly unrelated species in North America, he recorded his astonishment at the plants’ striking similarities.

That discovery, Pfister says, “fits into the Darwin story because it makes it easier to argue that life is connected.”

Despite starting his collection nearly from scratch, Gray created a store of botanical knowledge that was one-of-a-kind in North America, according to Pfister.

“He made it terrific,” Browne says of Gray’s garden. “It was an experimental garden, a pleasure garden, a teaching garden, just on the other side of the Quad.”

In the 1940s, the property on which the garden rested was sold. A housing complex, named Botanic Apartments in homage to what once stood there, was built on top of the garden’s remnants.

History of science lecturer Alistair W. Sponsel says he sometimes questions whether Gray’s legacy has been obscured like his once-flourishing garden—especially when compared to Agassiz, whose name is stamped on a theater in Radcliffe Yard.

Pfister partly attributes this disparity to the fact that, “Gray never fit into the Boston social scene quite as easily as Agassiz.” Sponsel wonders instead if the “controversial figures” like biologists E.O. Wilson and Ernst Mayr who have been associated with the MCZ since Agassiz’s time have thrust the museum more prominently into the public eye.

“A lot of exemplary work in natural history—like Linnaeus coming up with his binomial system of classification—was most famously done on plants using herbarium specimens,” Woods reflects. “Plants are still important for a lot of the same reasons, but I’ve wondered whether the public recognizes that as much as they recognize big displays in a museum.”

Competition with Agassiz aside, Gray’s impact lives on in the Harvard Summer School and in one of Harvard’s longest-running courses: the more-than-150-year-old “Plants and Human Affairs,” which is today known as Organismic and Evolutionary Biology 59 and is co-taught by Pfister and professor Charles C. Davis.

The course utilizes the herbaria’s resources to bring to life the relationships humans have had with plants for millennia.

Another of Gray’s classes was significant not so much for its content but for the season in which it was taught: Gray taught the first ever Harvard Summer School course in 1871.

Two years earlier, Charles Eliot had become president of Harvard and inaugurated a wave of curricular reforms, from the introduction of electives to the adoption of a departmental system. Under this more flexible framework, summer courses became a possibility, Pfister says.

While the desirability of studying plants in the summer as opposed to frigid Cambridge winters was likely Gray’s impetus, the Summer School marked an important step for female scholars.

“Summer school from the beginning had women,” Pfister notes. “It was really the first big chance for women to use Harvard facilities.”

All of Gray’s collections, and millions of other herbaria specimens, are accessible to botanists today—but the herbaria staff must work constantly to revise and update plant databases, as names and classification systems shift dramatically over time.

“That’s one real way in which our field is distinguished from most of biology,” says Davis, who in addition to his teaching uses the herbaria collections to study plant phylogenies and trace the effect of climate change on various species. “If you go next door and ask what’s valid, five or ten years out ... it’s obsolete.”

But one researcher’s burden is another’s historical treasure trove: from a history of science perspective, old plant labels are ripe for study.

“It’s the most wonderful sequence of working your way through how scientific knowledge really emerges,” Browne says of studying the layers of annotations on various specimens at the herbaria. “You can re-live the process of science.”

Sometimes current research can even be applied to answer the questions asked by scientists of the past, Davis says. For example, his own research has explored questions about plant diversity initially addressed by Henry David Thoreau, Class of 1837, and scientists have used plant DNA analysis to illuminate the Japan-America plant connections that so intrigued Gray.

“We’ve started to integrate more cutting-edge molecular approaches, but our field of plant diversity and evolution builds much more so on old literature and old research than a lot of the other hard-core molecular disciplines,” Davis explains. “We’re breathing life into these old collections.”