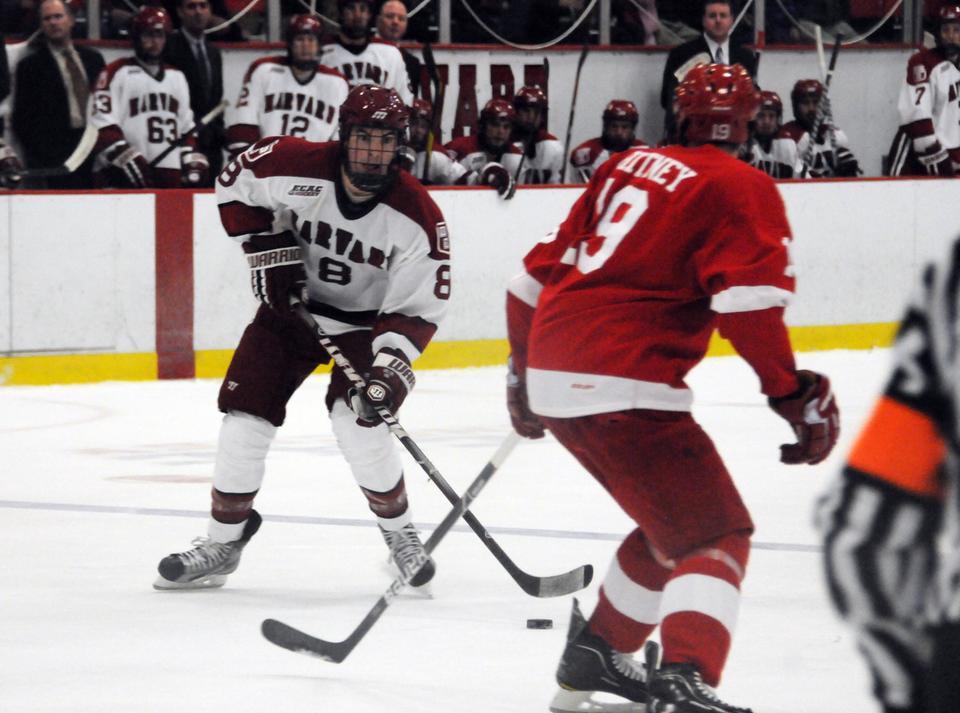 Rookie Patrick McNally, shown above in previous action, had three assists on the weekend. Senior Danny Biega contributed two helpers to the Crimson’s tie with University of Massachusetts Amherst Friday night. Though Harvard fell behind multiple times, the Crimson found ways to come back, 4-4.
By James M. Acer, Contributing Writer

The Harvard men’s hockey team rallied from a goal down on four separate occasions against the University of Massachusetts Amherst to escape with a 4-4 tie on Friday night.

After surrendering a goal just over a minute into the first period, the Crimson (3-3-3, 2-3-2 ECAC) battled from behind for most of the 60 minutes at the Mullens Center in Amherst, Mass. Harvard’s first three game-tying goals were each followed, within about a minute, by UMass Amherst (4-7-4, 2-6-3 Hockey East) scores to reclaim the lead.

Senior forward Alex Killorn added a goal of his own, and freshman forward Tommy O’Regan scored his second goal of the season to tie the game at four with eight minutes to play in regulation, pushing the game into extra time.

The Crimson failed to convert on an early power play in the overtime period, and the Minutemen defense held strong for the remainder despite a few scoring opportunities for Harvard.

The Crimson outshot its opponent, 44-35, on the night.

“There were a few things we would have liked to do better,” said sophomore defenseman Dan Ford, whose last-second shot in overtime sailed just over the frame of the net. “But overall, we were pretty happy with the effort.”

Like in many of its previous contests, the Crimson put itself in a hole early on. Just 90 seconds after the opening faceoff, Minutemen sophomore forward Conor Sheary put home a pass from teammate T. J. Snyer.

The Minutemen killed the first penalty before Everson put in a rebound off of a Biega shot to even the score at one apiece 7:30 into the period.

Five minutes after the score, the Minutemen earned their third penalty. Harvard cashed in on the man advantage, as Killorn fired a shot by goaltender Kevin Boyle, tallying his team-high sixth goal of the season.

This time the tie would last for only 30 seconds, as senior forward Danny Hobbs scored to put UMass ahead, 3-2, with five minutes left on the clock in the middle frame.

Kiley went to the penalty box for a second time four minutes into the third period, but the Crimson was unable to take advantage. Minutes later, after taking a pass from McNally, Fallstrom carried the puck deep into the UMass zone and fired a centering pass that was directed into the net by Everson.

But Harvard couldn’t hang on to the tie for long. Just a minute later, UMass’ Steven Guzzo forced the puck past Michalek after being rejected on his first two attempts to put the home team on top, 4-3.

The final equalizer came with eight minutes to play, as a shot from sophomore defenseman Danny Fick was deflected in by O’Regan.

For the first time, Harvard held its ground, not surrendering another score the rest of the way. UMass killed a power play resulting from a third Kiley penalty, and regulation ended with the score knotted at four.

Sheary crashed into Michalek early in the overtime period to give Harvard a five-on-four advantage, but the Crimson couldn’t capitalize. Everson was rejected at the right post by Boyle, denying his bid for a hat trick.

Fallstrom was later turned away on a wrap-around shot, and the Harvard odd-man rush in the waning seconds of the game came up empty as Ford’s shot went high. With either team unable to break the stalemate, the game ended in a deadlock.

The tie continues a pattern of comebacks for the Crimson. In its six wins and ties, Harvard has trailed five times, including in a 7-6 win over the University of New Hampshire in which they fell behind, 4-0, after the first period.

“I think it speaks to the team’s mental toughness,” Ford said. “When things haven’t gone right for us this year, we’ve consistently been able to get back to playing the way we want.”

Harvard was also adjusting to playing its first game of the year on Olympic-sized ice.

McNally’s three assists were a career-high, giving the freshman seven on the year. That total is topped only by Biega, whose two assists give him 10 on the season, tied for fourth best in the ECAC.