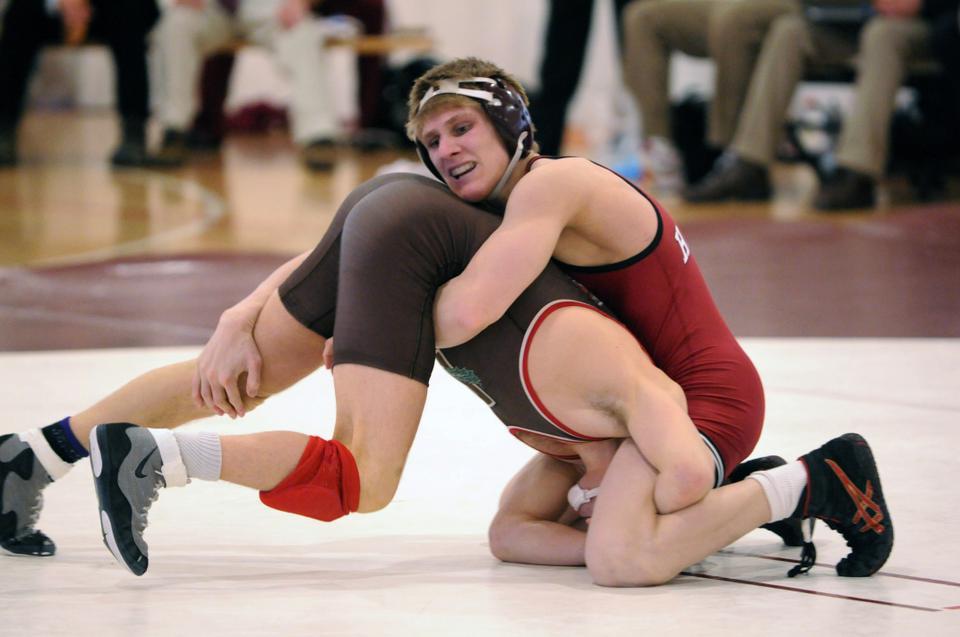 Junior No. 18 Steven Keith took third place at the Cliff Keen Las Vegas Invitational over the weekend. Unseeded rookie Jamie Fox also had a positive showing, placing seventh overall after downing No. 5 Ryan Mango from Stanford University. No. 7 Walter Peppelman dropped out due to injury.
By Steven T. A. Roach, Crimson Staff Writer

Taking on some of the best talent in the nation, two Harvard wrestlers earned their spots in the top eight of their respective weight classes this weekend at the Cliff Keen Las Vegas Invitational. With action wrapping up on Saturday, junior and No. 18 Steven Keith secured the Crimson’s highest finish of third place at 133 pounds, and freshman James Fox picked up seventh place at 197 lbs. Harvard finished the event 15th overall out of 34 teams.

Keith, the No. 8 seed in the tournament, fought his way through the wrestlebacks to earn third place, marking the first time that Keith gained a spot on the podium at the event.

In his opening two bouts, Keith edged out a victory over Hoftsra’s Jamie Franco before dominating No. 9 Jordan Thome of Army, 9-0. Keith lost in the quarterfinals to No. 1 Logan Steiber of Ohio State, who earned a fall at 4:40 to move onto the semifinals.

Despite the setback, Keith rebounded to win three more matches for a spot in the third-place contest.

Even though he had a lower seed than opponent No. 5 Zac Stevens, Keith took control of the match, taking down Stevens, 6-0.

“My strategy was just to wrestle my match,” Keith said. “I had wrestled well up to that point, and I knew that I was feeling good and moving really well, so I was just going to keep wrestling the way I was.”

Fox, unseeded in the tournament, was the Crimson’s only other top-eight finisher, picking up seventh place after a medical default from Michigan’s Max Huntley. In his opening round, Fox defeated Paul Rands from Navy, 7-1, but then fell to the No. 2 seed, Matt Powless from Indiana, 13-4.

In the wrestlebacks, Fox opened his quest for a chance on the podium by narrowly defeating Ohio State’s Andrew Campolattano, 9-8, but then lost to No. 8 Brandon Palik from Drexel, 7-4. The default from Huntley gave Fox a seventh-place finish for his first time competing at the event.

“He’s really been getting better every time he goes out there,” Harvard coach Jay Weiss said. “This weekend was great. He wrestled so well … He’s starting to believe—I can see it in how he’s wrestling.”

No. 2 Peppelman was a favorite to go far in the tournament, but his run was stopped in the quarterfinals by No. 7 seed T.J. Hepburn from Nebraska-Kearney, an eventual finalist. Peppelman started out strong with a bye and two easy wins over his opponents, but was forced to forfeit in the quarterfinals due to medical reasons.

With a chance to wrestle for a spot in the top eight, Peppelman was again forced to forfeit his match against Josh Demas, the eventual sixth-place finisher at 157 lbs, due to injury.

Two other Crimson wrestlers who came away from the event with wins were junior Paul Liguori and sophomore Cameron Croy.

Despite his surprise second-place finish at the Binghamton Open, Liguori lost in the first round of the Las Vegas event to No. 6 seed Craig Eifert in the 149-pound division.

Croy had a similar result at 184 lbs., dropping his first bout to North Carolina’s Thomas Ferguson, 10-2. Croy picked up two more victories in the wrestlebacks but eventually fell to Brown’s Ophir Bernstein, 10-9.

Senior Bryan Panzano and freshman Joe Barbato also competed in the event at 174 lbs. and 125 lbs., respectively, but both went 0-2.

Panzano was pinned by No. 4 seed Justin Zeerip of Michigan 23 seconds into the match and then lost 16-0 to Air Force’s Clayton Gable. Barbato lost to Arizona State’s David Prado in the first round, 6-2, and then lost to Utah Valley University’s Colby Christensen, 7-1.