Harvard Claws Its Way Back 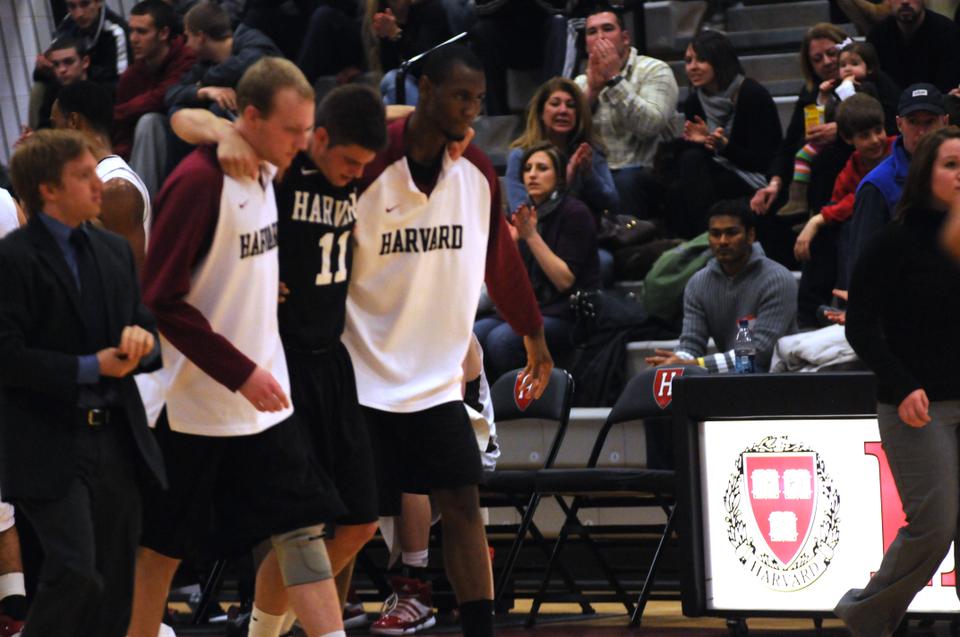 His team down by 22 points to Brown at halftime, Harvard men’s basketball coach Tommy Amaker saw nothing but an opportunity for his young squad.

“Coach was just like, ‘This is going to be part of our story. Being down 20 to Brown…at the end of the season, we’ll look back and say this is one of the moments that helped us win the Ivy League,’” sophomore wing Christian Webster said.

While at least three weekends of basketball remain before Amaker’s prediction can come to fruition, the Ivy title hopes for this year’s team—tied for the best start in conference play in school history—managed to avoid a dramatic setback Saturday night.

The victory helped the Crimson remain half a game behind league leader Princeton, which swept its Columbia-Cornell road trip this weekend.

Twenty minutes into Saturday evening’s matchup, it looked as if the Crimson’s good fortune at home—where it has won a program-record 15 straight—had finally run out.

A crowd of 1,377 saw the hosts play sluggishly out of the gate, quickly falling behind by 10 at 14:11 after the Bears hit seven of their first eight shots.

The situation grew more grim ten minutes into the contest when Crimson guard Oliver McNally injured his ankle on a drive to the basket.

The junior co-captain had to be helped off the floor by two teammates and sat out the second half with a protective boot on his left foot.

Its backcourt leader relegated to the bench, Harvard turned it over 12 times in the first half and had defensive troubles inside and out.

Brown proceeded to score on nine of its final 11 possessions of the half, building a lead as large as 24 on 19-of-30 shooting from the field, including 8-of-12 from behind the arc.

“They were just on fire, and sometimes you run into that,” Amaker said. “We haven’t been great defending the three, so we were very concerned with that at the start, and they proved us right.”

But despite all signs pointing toward a Bears upset, Harvard had another ending to its story in mind.

Sophomore Kyle Casey and junior co-captain Keith Wright combined for Harvard’s first 10 points out of intermission, capped by a two-handed slam by Casey off an errant three-pointer by Webster.

“Oliver and myself, we take it upon ourselves to keep the team going and keep us focused,” Casey said. “I think leadership-wise and vocally, I took it upon myself to get the team going,”

The dominant pair totaled 41 points on the night, and Wright’s 14 rebounds gave the veteran his ninth double-double of the year.

With the Crimson frontcourt converting underneath, the squad’s shooters began to heat up from the perimeter, especially with both teams content to ramp up the game’s pace.

Four minutes into the half, sophomore guard Brandyn Curry sprinted down the court in transition and found Webster in the left corner for a three-pointer that brought Harvard within 13.

After a Brown miss, Curry—who had sustained an ankle injury the night before—pushed the tempo again, this time finding Rivard on the right wing for a triple to cut the deficit to 10.

After both squads traded baskets, it was again Curry who helped bring it to single digits, driving to the basket and kicking it out to Rivard for another three.

Webster’s turn came nearly two minutes later, when he took a swing pass from Rivard and knocked down a left wing triple, making the score 64-60 with 10:12 to play and setting off the traditional “I believe that we will win” chant by the now-revitalized crowd.

By then, the Bears’ fate was almost inevitable.

The long-range tries that had come so easily in the first half were no longer falling, and when Brown made it to the hoop, it had to contend with Wright and Casey, who combined for eight blocks on the night.

The Bears also appeared to have caught the turnover bug that had plagued Harvard in the first half.

Reveling in the spirit of the moment, Curry made a nifty steal and threw the ball ahead to Wright, whose two-handed fast-break dunk made it 64-62 with 9:26 left.

Brown missed yet again, and this time Curry kept it himself, holding up three fingers to the fans after nailing a straight-on three to give the Crimson a 65-64 advantage.

Though a difficult fall-away jumper from Brown’s Tucker Halpern provided the third lead change of the night, the Bears would turn it over on their next time down the floor, setting up another three by Webster.

The sharpshooter’s second-half spurt represented a strong recovery from his 0-for-7 performance from the field in the first half.

“Coach told me to keep shooting, and shooters shoot, so I just kept shooting,” Webster said. “I found my rhythm.”

His squad’s hopes slowly slipping away, Halpern launched a long three but was unable to convert.

Casey punctuated the 39-13 run with an athletic move in the post, earning a three-point play and a hug from his teammate Wright.

Though Harvard did not play flawlessly the rest of the way, the lead would reach as large as 11 for the Crimson, which hit the necessary free throws to cement the win.