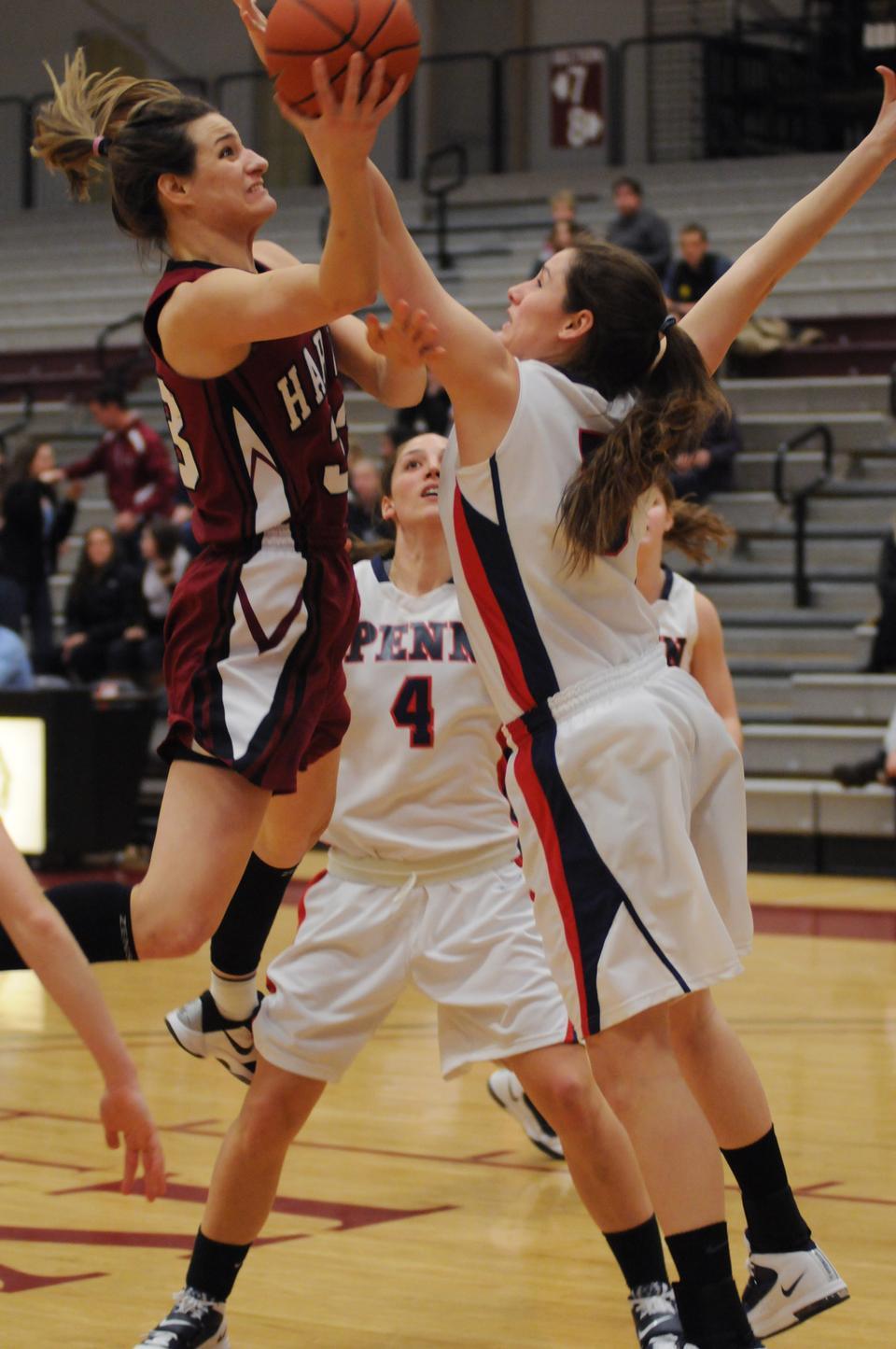 Senior Emma Markley, shown above in earlier action against Penn, led the Crimson offense on Saturday night with 22 points and 11 rebounds in an effort to down Brown. Harvard had two chances with the shot clock winding down to win, but the Bears escaped with the victory, 57-56. By Emily C. Wong
By Maya Jonas-Silver, Contributing Writer

It was a tough weekend for the Harvard women’s basketball team, as its seven-game winning streak came to an end after losing both to conference rival Yale Friday night and a struggling Brown team the following evening.

The Crimson (13-8, 5-2 Ivy) was the favorite to win against the Bulldogs (10-12, 6-2) but found itself down, 39-19, at the half. Harvard picked it up after the intermission, but its attempts fell short and the Crimson lost on the road, 82-71. Harvard played a nail-biter Saturday night against sixth-ranked Brown (7-15, 3-5), failing to hit its last two shots and falling, 57-56. Senior Emma Markley led the team with a double-double, but her efforts weren’t enough to carry the Crimson to victory.

“[We’re] extremely disappointed in both [games],” said Harvard coach Kathy Delaney-Smith. “We felt we could have won both and we let both of them slip away…There’s nothing really else to say.”

The Crimson, undefeated and leading the Ivy League going into the weekend, dropped below Princeton and Yale to settle at third in the conference standings.

Harvard’s offense was cold against the Bears on Saturday, as it was held to a shooting percentage of 33.9 from the field, the lowest the Crimson has had in conference play thus far. This was also the first time Brown grabbed a victory over Harvard since its 2005-2006 Ivy Championship season.

“We got great shots,” Delaney-Smith said. “They weren’t falling for us all weekend.”

“Offensively we weren’t very fluid,” she said. “I think we need to work on moving the ball better.”

Markley led the stagnant offense and posted her second double-double of the season, racking up 22 points and 11 rebounds.

The Bears jumped out to a fast start, knocking down two three-pointers to open the game, 6-2, but Harvard remained in striking distance as the two teams battled for the lead throughout the first half. The Crimson went into halftime losing, 38-29.

“Brown played an amazing game,” said Delaney-Smith, despite the Bears’ lackluster season. “They’re able to put together a great game.”

Harvard came out strong in the second half, outscoring Brown by eight points after the break. The Crimson pulled the game to 52-50 with seven minutes remaining, then lost some ground before bringing it back within two with 48 seconds left.

Harvard regained possession with 21 seconds on the clock after forcing a Brown turnover and immediately called a timeout. With the game on the line, the Crimson bounced the shot off the rim, snagged the rebound, but again missed the basket as the final seconds counted down.

Harvard also struggled on Friday night against Yale, as the offense faltered once again and the opponent jumped out to an early 9-2 lead. The Crimson never caught up after that point, as the Bulldogs dominated the game from start to finish.

“We just played really flat,” Matera said. “In the Yale game, I feel like we were set back on our heels for the majority of the game.”

There was little for Harvard to smile about in the final minutes of the half, as the Elis went on a 20-7 run and forced 10 Crimson turnovers. By halftime, Yale sat on a 20-point advantage, and Harvard’s powerful offense had only managed 19 points in the half.

Things improved for the Crimson after halftime as it managed to gain nine points to come within 11, but the Bulldogs held them to a comfortable distance for the rest of the half.

“It was obviously a pretty disappointing weekend for us,” Matera said. “It was a pretty unexpected result.”