Family business could not keep up with changing times 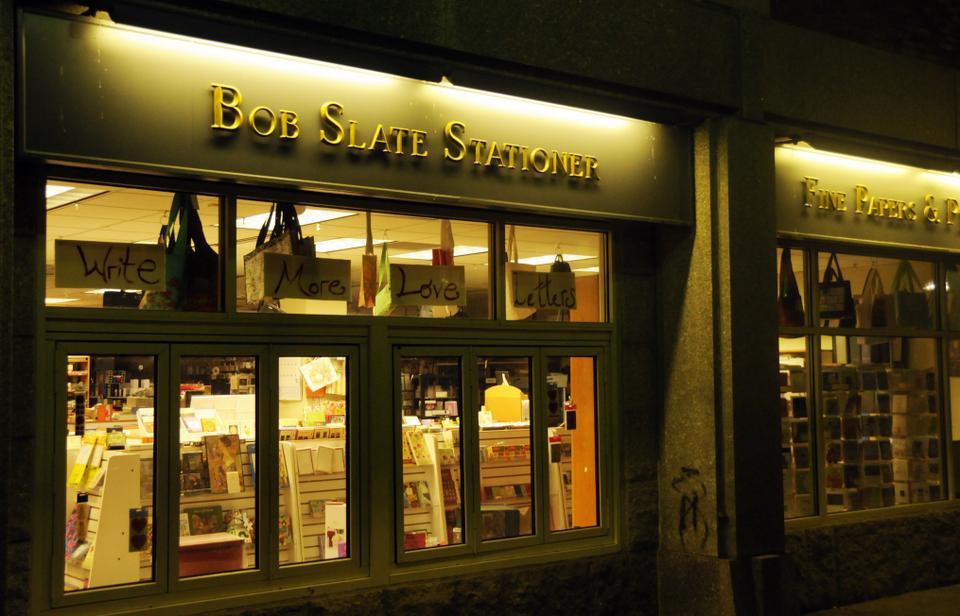 Bob Slate Stationer is closing the doors of all three of its locations, two of which in Harvard Square.
By Xi Yu, Crimson Staff Writer

Bob Slate will close its local chain of stationery stores in March after serving Harvard and Porter Square for 78 years, store ownership announced on Thursday.

The company, officially Bob Slate, Stationer, has been seeking a buyer since October 2009. It chose two years ago not to renew its Harvard Square lease covering its Harvard Square locations due to “declining sales” and “advancing age,” according to a letter to its patrons on its website.

The office and art supply store, which currently occupies 1288 Mass. Ave. as well as 63 Church St. in Harvard Square, was passed down from its late founder, Bob Slate, to his sons Justin and Mallory Slate.

All three locations, including the one in Porter Square, will close by the end of March.

The business started as a small office supply shop on 8 Holyoke St. in the mid-1930s. Bob Slate then moved to 1284 Mass. Ave., and ran a joint office supply and laundromat for a few decades.

The family-owned business boomed, which led to the opening of two more stores by the 1980s, Mallory Slate said.

But in 1986, when the first Staples was introduced, the company was forced to re-envision its business model to focus on stationery.

The reformed approach kept the company going at a growing rate until the early 2000s.

“It’s never been the same,” Mallory Slate said. “Our sales started declining ... I just started getting older and grumpier; we’ve been slipping and sliding since 2001.”

The downturn in business led the Slates to consider selling the business in recent years.

“This company needs new blood, invigorated vision,” Mallory Slate added. “It’s time to get off the stage, and so that’s what we’re doing. We want to do that before the stage collapses.”

Mallory Slate said he will miss his staff, his employees and “everything” about the work that has consumed his life.

Molly E. Dektar ’12, who is pursuing a secondary field in Visual and Environmental Studies, said that she frequented the stationery store to purchase painting supplies, distinctly colored pens, and even a Van Gogh umbrella.

“I’m upset that they’re closing because they’re such a convenient place to get obscure art supplies,” she said.

“I don’t know what they’re going to be replaced by,” Dektar said, “but they were a very valuable resource.”