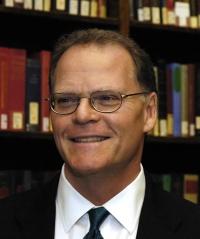 1. Fifteen Minutes: Your book deals with the influences that shaped Obama’s view of the world. Why is this important ...
By Jessica N. Nieto

1. Fifteen Minutes: Your book deals with the influences that shaped Obama’s view of the world. Why is this important for Americans to know?

2. FM: Did your opinions about him change after conducting extensive research into his past?

JTK: Yes, I had been skeptical about him in the run up to the Democratic primary because he seemed like just another moderate Democrat, and as someone pretty far to the left myself, I was not terribly impressed with what he had to offer. But when I read his books I was actually quite impressed to find that he was a man of depth and thoughtfulness and had a much deeper understanding of American history and how democracy works than I had given him credit for.

3. FM: Do you think more Americans would have faith in him as a president if they knew more about his educational background?

JTK: Not many people have a very good sense of how he sees the projects and the possibilities and the limitations in contemporary politics in relation to the much longer history of the United States ... He represents something quite different from most democratic politicians. Although I would have liked it he had been more toward the left in his political views, I developed a respect for the solid foundation [on which] his approach to politics rests.

4. FM: How do you think the president has received your historical account of his influences?

JTK: Oh I have no idea whether he’s read it. I hope that at some time when his presidency has ended, he would find the time to read it, but I think he has so many more important things on his mind [Chuckling].

5. FM: Was there one influence in Obama’s life that stood out as being more visible than any others?

JTK: It’s hard to say if there was one influence that was strongest over the others because there have been many that together have shaped Obama’s worldview.

6. FM: Were there any influences that surprised you?

JTK: I think what surprised me more than anything else was the intellectual ferment that was going on at the Harvard Law School when he was a student there. What impressed me was the extent to which Obama was immersed in [intellectual] debates ... A lot of students skate through the Law School without ever getting that deeply engaged.

7. FM: In your New York Times interview, you were quoted as saying that Obama was a “rare breed of philosopher presidents.” What do you mean by this?

JTK: Actually that was a phrase that the reporter Patricia Cohen had used, and I’m actually very glad you asked that question because now I can go on record saying that I never used that phrase, and never would use that phrase. It suggests Plato’s philosopher king, and that’s not the way I see Obama. [But] I think he’s someone who read a lot of philosophy and who takes ideas seriously.

8. FM: If Harvard students were to look into the influences that shaped your world views, what would they find had the biggest impact.

JTK: [Laughing] I think most of them would find them much less interesting than the influences on Barack Obama. But, playing college baseball in my freshman year of college in 1970 was probably the most influential moment in my life, when I became very engaged in the anti-war movement.

9. FM: With your success as a historian, why do you teach?

JTK: I enjoy everything about it. I don’t think I’d be doing this if I couldn’t teach. When you get to have engaging conversations with students, and you get to see them coming into awareness and understanding of new ideas, there’s nothing more satisfying than that. One of the perks about teaching at Harvard is I get to experience that every day.

10. FM: You’ve taught several courses abroad: were there any major differences that came with teaching abroad?

JTK: It’s an entirely different system in Britain, and the position I had only required me to give a series of public lectures. There was no formal course, so the students who came were simply interested in the topic. There were no tests, there were no papers, and they solely came to hear what I had to say.

11. FM: And was your interaction with colleagues different?

JTK: What was also different was that at any given lecture I had a half-dozen to a dozen faculty members in attendance and that’s something I’ve never seen in an American university. It made me raise the bar and make sure that this was the best work I could present.

12. FM: What is your favorite work [that you’ve written]?

JTK: I couldn’t specify just one. At the moment I’m in the middle of a book, so that one would have to be my favorite because I’ve spent the most time on it, but all my books have taken a lot of time and hold significance to me.

13. FM: So then, what would you say is the most difficult part of the writing process, since you’re right in the middle of it?

JTK: Well it depends on the type of book. For the piece I’m writing now, the hardest part is keeping the many pieces of the book in focus in my mind as I work on individual portions of the book.

14. FM: To that end, what advice would you give Harvard thesis writers as they head into crunch time?

JTK: Thesis writers should keep their focus on what they’re working on at the moment and not get distracted by the larger project. If you can write a thesis as a series of short papers and not be intimidated by the scale, it’s not that much more difficult than writing the papers you’ve written up to that point. So, think big while simultaneously you think small.

15. FM: With the second annual “Harvard Thinks Big” coming up, what would be the idea you are most passionate about that you would share in order to inspire Harvard students?

JTK: I’d have to say democracy, which has its roots in the ancient world and we have seen unfolding before our eyes right now in Cairo. I definitely think that’s an idea worth confronting and worth wrestling with.