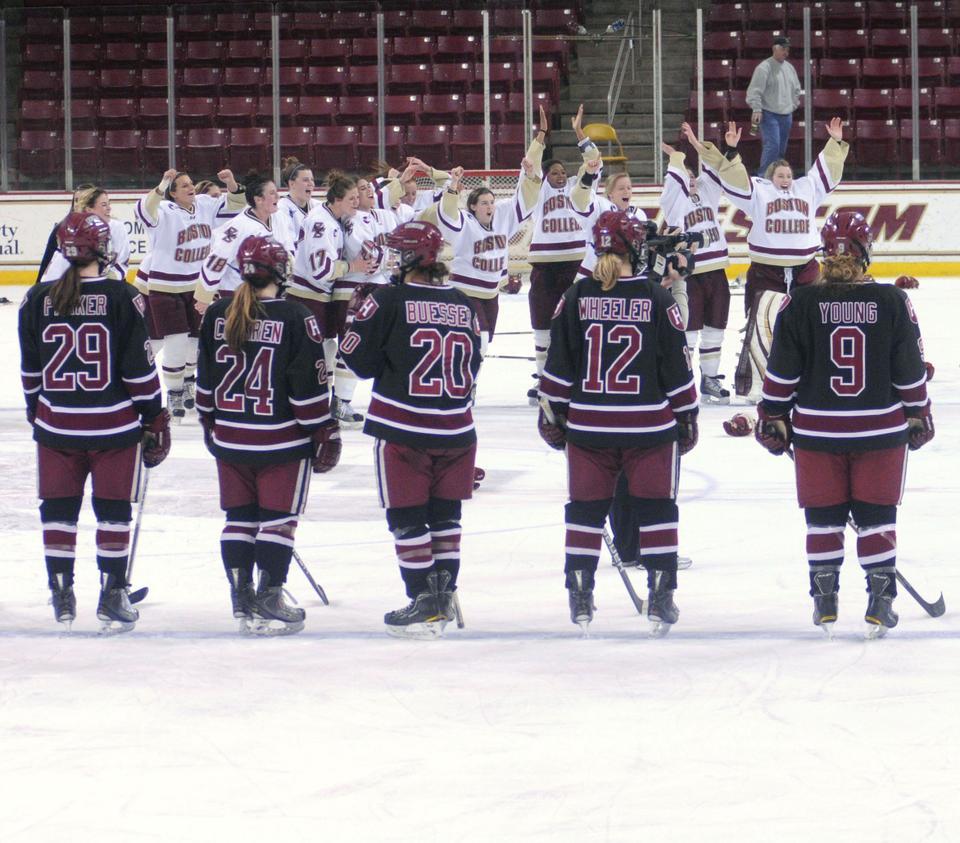 Boston College celebrates its victory after the trophy ceremony at last night’s Beanpot. Harvard women’s hockey was unable to defend its title in the annual Boston collegiate tournament, losing to the Eagles at the Conte Forum, 3-1. BC was also responsible for the team’s last finals loss in 2009.
By Catherine E. Coppinger, Crimson Staff Writer

Before the Harvard defense could adjust, the Eagles’ junior quickly tucked a shot behind sophomore goaltender Laura Bellamy, and into the top left corner of the net.

The Eagles would go on to seal the deal with a late assurance goal, as tri-captain Kelli Stack netted the last goal of the game at 16:42 off of a pass from Restuccia.

“To be able to have a championship in the middle of the season, it’s extra special,” said Boston College coach Katie King. “I think our kids do a good job of getting up for it and being ready to play when it’s time for the Beanpot.”

The Eagles were first to light up the scoreboard on the night, as BC sophomore Caitlin Walsh scored on a breakaway, unassisted, with under three minutes to play in the first period.

But just seconds later, while the Eagles’ opening goal was still being announced, senior forward Katherine Chute evened the score, 1-1, with Harvard’s only goal of the night.

Bellamy earned the assist with a long pass to Chute, who was sitting in the neutral zone. The senior weaved through the BC’s defenders before slipping the puck into the right side of the goal over tri-captain goaltender, Molly Shaus.

The second period was scoreless, though chances to take the lead came on both sides.

The Crimson and the Eagles had eight shots on goal apiece, and each team had one two-minute power play in the second, with Harvard taking the advantage at 13:30 and BC going a man up at 4:20.

“We’re a much better team now [than when we first played Boston College],” Stone said. “Our emotional resiliency was there tonight and it wasn’t there before [winter break]. We put too much pressure on the game before, but now our kids can just go play. They believe in each other and we have a better game than we did before Christmas.”

Without a doubt, the Eagles had the closest opportunity on goal in the second period.

With less than seven minutes to play in the frame, a shot from Boston College forward Danielle Welch hit the crossbar and bounced out.

At the next stoppage, the referees reviewed video footage of the play, but the ruling of ‘no goal’ on the ice was confirmed.

“I always think those [almost-goals] go in,” King said. “Or I always hope they go in. That’s one of the reasons we have the video replay system…to be able to check out those kinds of opportunities.”

Bellamy had a particularly strong game between the pipes, with 26 saves and an assist on the Crimson’s only goal of the Beanpot finals. Shaus had a solid night as well, recording 31 saves.

Harvard has won 13 Beanpot titles in the tournament’s history, just one fewer than the all-time leader in wins, Northeastern.

Despite the loss last night, Stone is confident in her team’s potential, as the Crimson heads into the final week of the regular season.

“We need every game, from the first one back in October to the last game of the regular season on Saturday night,” Stone said. “We approach each game like we want them all…We’re still playing for the No. 2 spot in the league, which would secure home ice for us all the way up to the [ECAC finals].”

The quest for home ice will continue with matches against Colgate and Cornell this Friday and Saturday, respectively, at Bright Hockey Center, to round out the final weekend of regular season.