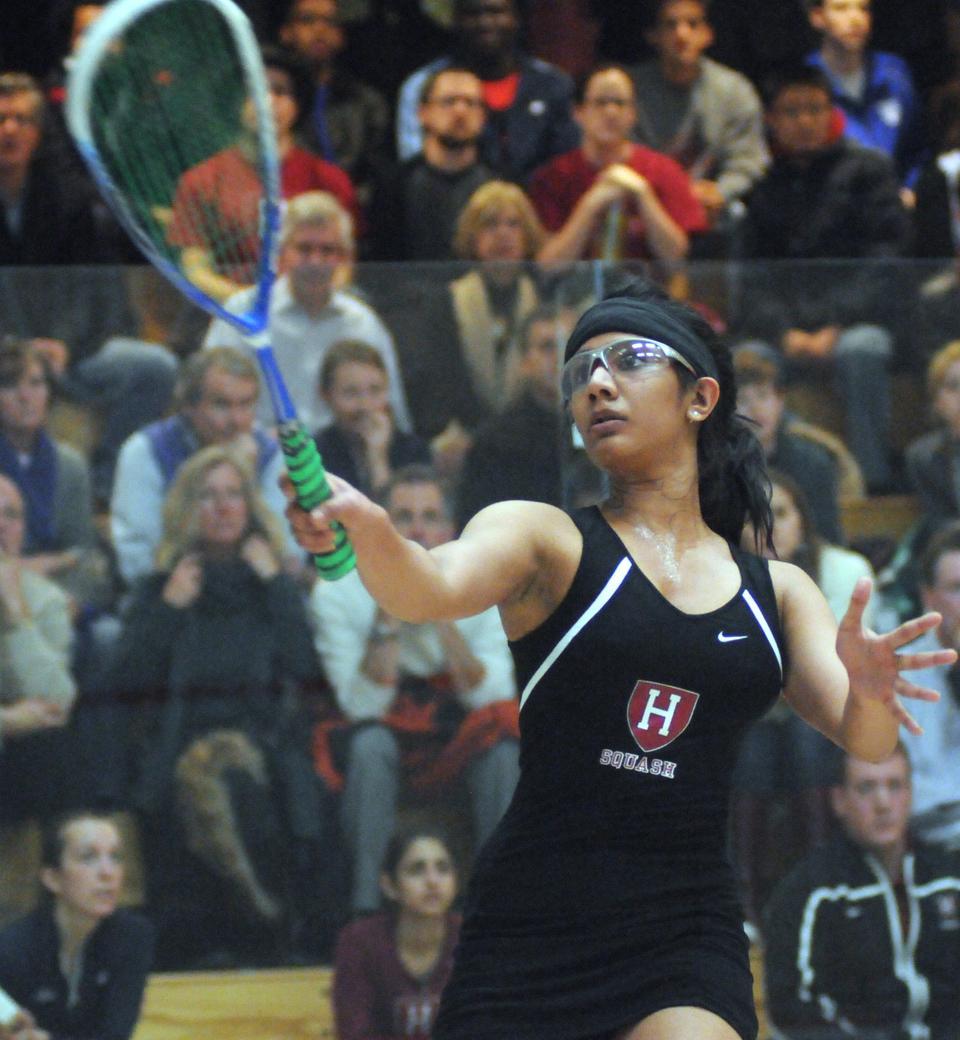 Title defense comes up short as the No. 2 Harvard women's squash team loses in the finals of the CSA Team Championships against top-ranked Yale.
By Molly E. Kelly, Crimson Staff Writer

In the 2010-2011 season, the third time was unfortunately not the charm for the Harvard women’s squash team.

After losing narrowly to Yale in pre- and regular-season matchups, the Crimson thought it was ready to face the Bulldogs again in the CSA Team Championship final and come away with the Howe Cup. Harvard (11-2, 5-1 Ivy) instead experienced another heartbreaking 5-4 loss on Sunday, failing to defend its CSA title from last year. With that, the Bulldogs (17-0, 6-0) end their undefeated season with the Ancient Eight title and CSA team trophy.

Yale reached the final match of the Howe Cup tournament in a similar fashion as the Crimson—the Bulldogs beat No. 8 Dartmouth, 9-0, and then No. 5 Princeton, 6-3

But the match between the top-two squads in the nation was much closer.

“It came down to the last match again,” said captain No. 13 Alisha Mashruwala. “It was a very sad loss because everyone fought so hard and played with so much heart.”

After the first rotation of senior Alexandra Zindman, junior No. 37 Cece Cortes, and Mashruwala came off the court, Harvard was down, 2-1, with the only win coming from a four-frame battle between Cortes and sophomore No. 46 Katie Ballaine.

The next rotation saw senior No. 29 Bethan Williams, junior No. 7 Nirasha Guruge, and sophomore No. 17 Natasha Kingshott take the court.

“Kingshott lost in a heartbreaking 3-2 match,” Cortes said. “She came back from being down 2-1 to tie it, but the other player was very fit and on today … It was a lot closer than the match score makes it out to be.”

Down 4-2, the Crimson had three matches left to seal the win.

No. 1 sophomore Laura Gemmell and No. 42 sophomore Sarah Mumanachit upped the ante when they knotted the match at four apiece; the championship then rested squarely on the shoulders of senior No. 9 June Tiong.

“[Tiong] played a beautiful game,” Cortes said. “She’s one of the most beautiful players to watch—she’s great tactically.”

It was a 13-11 tiebreaker in the fourth frame that finally handed the Bulldogs the Howe Cup.

“At the end of the day, someone had to win, and that unfortunately wasn’t us,” Mashruwala said.

No. 2 Pamela Hathway and Wee Nee Low eked out impressive five-set victories for the Bantams, but their efforts were not enough to carry the Bantams (14-3, 5-0 NESCAC) through the semifinal round of the CSA tournament.

“Trinity, I would say, was a much greater test [this time] than when we played them last week,” Cortes said. “They came out really strong … I think that it says a lot about our team that we were able to pull off a 6-3 win.”

Part of that victory was no doubt the resilience of the Harvard squad. After falling just short of victory in her first two sets, Kingshott turned things around at the No. 5 spot. Dominating the next three frames, the Connecticut native dropped her No. 55 opponent Emery Holton, 11-9, 11-8, 11-5, 11-2, 11-3.

Playing just below Kingshott in the sixth position, Cortes also put on an impressive performance. Cortes swapped sets with her competition, No. 33 Alicia Rodriguez, to push a fifth frame.

“The match against Trinity was very close this time,” Mashruwala said. “Every single one of the girls played very well to get the win.”

Mashruwala, Gemmell, Mumanachit, and Williams also chipped in to ensure Harvard’s ticket to the championship match.

The Crimson came out firing for its first match of the tournament, quickly dispatching the Big Red (5-7, 2-4) and knocking its Ivy foe out of contention for the Howe Cup. Eight of the nine Harvard athletes won in dominant fashion, blanking their opponents in straight sets.

“The match [against Cornell] was a great way for us to settle into the tournament this weekend,” Cortes said. “We got out a bunch of kinks that we had ... Overall, we played solidly.”

The biggest battle of the day unfolded during the No. 3 match between Mashruwala and No. 26 Jesse Pacheco, who during the regular season played at the top against Gemmell. After dropping close first and fourth sets, Mashruwala regained momentum and pulled out the win, 11-8, 11-7, 11-9, 11-8, 11-6.

“Cornell played very well,” Mashruwala said. “They had nothing to lose—all of them went out there and gave their best. It was important for our girls to be composed, [and] they were.”

Gemmell, at No. 1, faced off against 16th-ranked Jaime Laird, while at No. 2, Guruge faced her teammate’s sister, captain No. 35 Jennifer Gemmell. The Crimson’s Gemmell and Guruge claimed victory without dropping a frame.