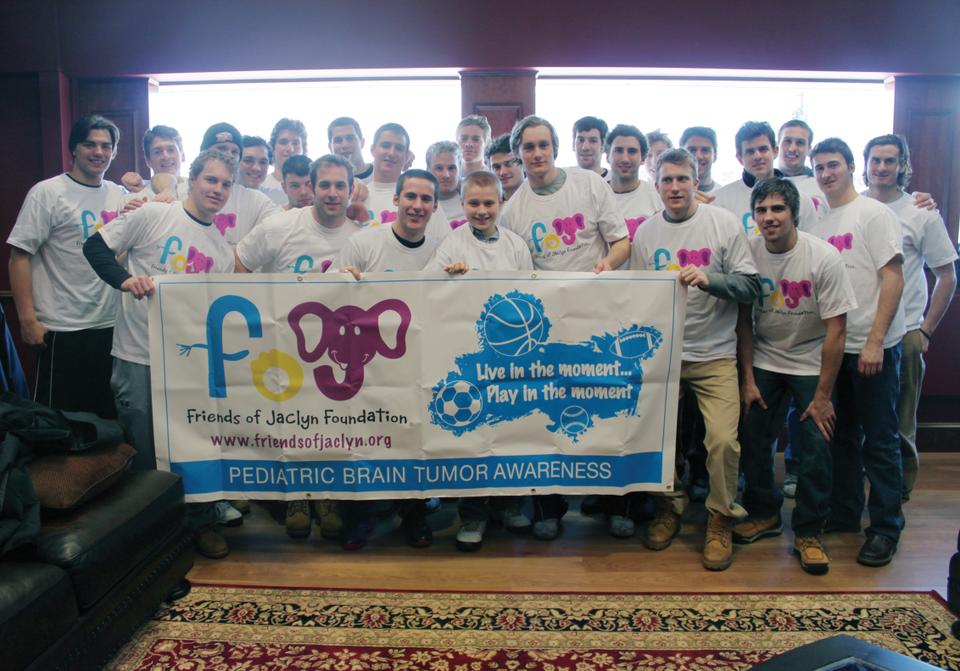 In the world of sports, “tough” is a botched shot, a missed field goal, or a loss at the buzzer.

But the adversity that 12-year-old Nathan Potvin faces gives new meaning to what a tough situation really is.

At five years old, the New Hampshire native was diagnosed with a spinal cord tumor. After a series of brutal procedures, the disease went into remission.

Even after leading a normal and healthy life for years—as Nathan did—all patients with serious illness fear the news that he got last spring. During a check-up with specialists in Boston, Nathan and his family were informed that the tumors had returned, and that he would need to undergo an aggressive course of treatment. Doctors at the Dana-Farber Cancer Institute prescribed 15 months of chemotherapy, a grueling treatment for anyone, let alone a seventh grader.

Despite the prognosis, Nathan hasn’t stopped participating in hockey. The only difference is that his practices and games are in Cambridge instead.

Nathan’s doctor recommended him to Friends of Jaclyn a few months ago. The foundation pairs children facing serious illness with local high school or college teams and has developed a national presence.

FOJ has worked with Harvard before—the baseball team “adopted” a three-year-old, Alex Wawrzyniak, last spring, and softball coach Brandi Gordon works with the non-profit. The team is looking to adopt a girl of its own this year.

When the charity connected Nathan to the Crimson men’s hockey team, the coaching staff was quick to jump on the unique opportunity.

“Coach Donato brought it to my attention earlier in the year, just after I was hired here,” said Bill Downey, director of hockey operations. “I knew it was something that the players on the team would really take a hold of and get involved with.”

Downey says that Nathan, who comes to team functions with his father, family, and sometimes with friends, has become full member of Harvard hockey. One of the primary goals of FOJ, after the adoption, is to incorporate the child into the team to create an extended support group.

“He was a little shy at first, but he’s opened up quite a bit and the team has really taken a [liking] to him,” co-captain Chris Huxley says. “He’s part of the team. It’s good to have him be part of the team.”

As a member of the Harvard hockey, Nathan gets to enjoy some of the benefits that come with being an athlete for the Crimson. Like his teammates, Nathan has his own locker.

Last Friday, Nathan was introduced at a game with the team. Downey asked Mike Potvin, Nathan’s father, to get his hockey gear—which Nathan usually keeps in the car—out of the trunk.

“And then [Downey] said, ‘Here’s what I want to do: during lineups, we introduce Harvard, but we also want to introduce Nathan,’” Mike remembers. “[That] was really cool.”

On January 28, Nathan was introduced to the crowd at Bright Hockey Center as a member of the team.

His new-found team participation has meant more than a roster full of new older friends.

Throughout most of his life, Nathan’s visits to Boston have usually been associated with treatments or medical consultations.

“The biggest thing for Nathan is that it gives him something good to look forward to going to Boston,” Mike says. “Every time before the Harvard relationship, he always thought of Boston as treatments, shots, probing and prodding. Now when he goes to Harvard, it’s a good distraction.”

Nathan will often join the team shortly after finishing a day’s treatment. Despite the often agonizing side-effects of chemotherapy, he remains upbeat when he spends time with the team.

“He’s a fun-loving kid; he’s very positive,” Huxley says. “To be honest, if you just met him, you wouldn’t even know there’s anything going on. He’s really happy every time he’s around the rink.”

Visitation hasn’t been one-sided. A few members of the team surprised Nathan after one of his treatments at the hospital. But it was the team’s presents, not its presence, that surprised the 12-year-old the most.

“[Co-captain] Michael [Del Mauro] came up to me and said, ‘Hey, does Nathan play video games or anything?’” Mike recounts.

Nathan’s father said the he had planned on giving Nathan a Playstation 3 for his birthday later this month, and suggested that the team buy NHL 11, a popular hockey game for the system. Del Mauro declined.

“[Del Mauro] said, ‘No, Mr. Potvin,…you don’t understand. We want to come by the hospital and bring the whole console, with the NHL 11,’” Mike remembers the co-captain saying.

The team gave its early birthday present to Nathan later during the hospital visit.

“When he opened it up, he had no idea,” Mike says. “He was really shocked.”

Nathan now gets to play NHL 11 with some of his teammates, using Xbox live to take on the members of the Crimson back in Cambridge. His father also says that he has regular e-mail contact with Del Mauro, and regularly communicates with the team in one way or another.

Nathan’s time at Harvard has turned the whole Potvin family—who previously had no connection to the school—into some of its most ardent fans. According to Mike, everyone in the family, including Nathan’s younger sisters Paige and Grace, proudly wears Crimson gear.

“Right there near the top of their [Christmas] list was Harvard gear,” Mike says. “Anything that says Harvard on it. I actually just bought a Harvard hat the other day at the rink.”

“You see him cheering the guys on and…being positive,” Downey says. “You think about the things that you’re faced with every day, [and then you see] a kid like that is battling such a tough disease and he can remain upbeat and lives to be around the game.”

“Having him around has kept morale up with the guys, and hopefully in return, him being around us helps him out in some ways as well.”