Not March Madness, But Still a Tournament 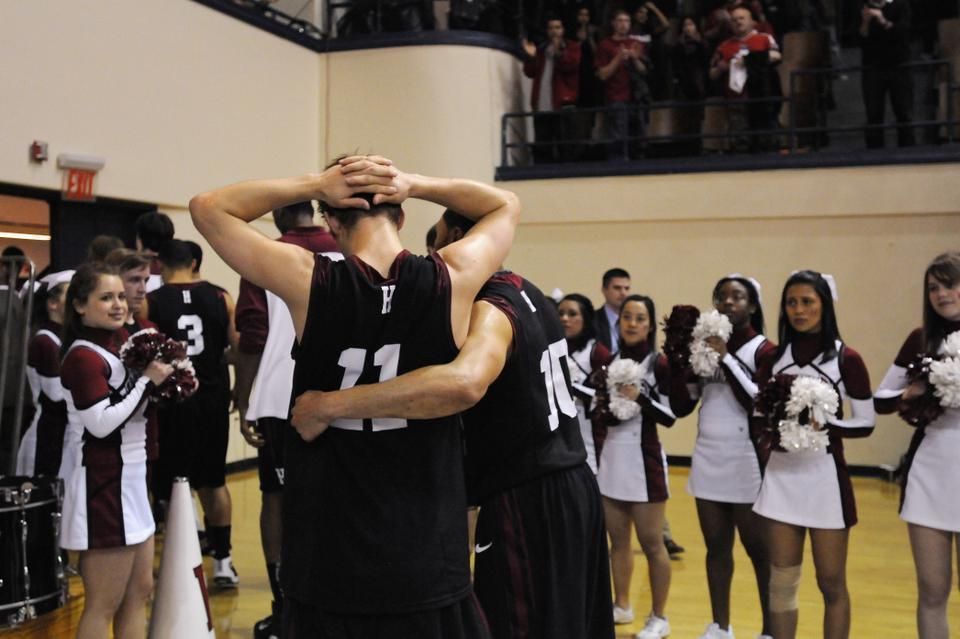 After a gut-wrenching loss to Princeton Saturday, the Harvard men's basketball squad did not receive the at large bid it needed to enter the NCAA tournament. Instead it will head west for a first-round NIT matchup against Oklahoma State Tuesday night.
By Scott A. Sherman, Crimson Staff Writer

The conclusion to the Harvard men's basketball team's 65-year NCAA tournament drought will have to wait at least another season.

Exactly 24 hours after its dream of an automatic bid to the Big Dance evaporated in the most heart-wrenching of ways Saturday evening, the Crimson gained some more disconcerting news when it found out it hadn't earned an at-large bid to the tournament, either.

Harvard's RPI of 35 was the highest of any team not invited to participate in March Madness.

“We knew the chances were slim [to get in], but we still had hope,” sophomore guard Christian Webster said. “It’s disappointing.”

On Sunday evening, the Crimson was offered and accepted a bid to the National Invitation Tournament, along with 31 other teams left out of the Big Dance field.

Harvard was seeded sixth in its region and will travel to Stillwater, Okla., to take on the Oklahoma State Cowboys (19-13, 6-10 Big 12) Tuesday at 7:30 p.m., in a game that will be nationally televised on ESPN.

“We’re really excited,” junior co-captain Oliver McNally said. “It’s going to be a fun experience for us...the NIT is a big deal; we’re going to try to win some games and extend our season.”

Oklahoma State, the third seed in the region, enters the tournament with wins over Alabama, Stanford, then-No. 17 Kansas State, then-No. 15 Missouri, and Baylor on its resume.

Most recently, like the Crimson, the Cowboys are coming off an agonizing one-point loss. But Oklahoma State’s defeat was to No. 2 Kansas, whom the Cowboys took to the wire in the quarterfinals of the Big 12 tournament on Thursday before falling, 63-62.

Oklahoma State is led by senior forward Marshall Moses, who paced the team with 14.3 points and 7.4 rebounds per game on the season. He will provide a difficult matchup for Crimson junior co-captain Keith Wright, the Ivy League’s Player of the Year, who also led his team in scoring and rebounding.

The Cowboys frontcourt suffered a big loss in February, when junior Darrell Williams, the team’s second-leading rebounder, was suspended after being charged with felony rape. But sophomore forward J.P. Olukemi has since raised his game and adds 11.5 points off the bench.

In the backcourt, Oklahoma State junior point guard Keiton Page chips in 13.5 points and led the team with 23 against the Jayhawks. He will pose a defensive challenge for Harvard sophomore Brandyn Curry, who did a good job defending Princeton’s Dan Mavraides on Saturday.

Oklahoma State was ranked just 330th out of the 346 NCAA Division I teams in assists per game this season. Sophomore guard Ray Penn led the squad with 2.1 per contest.

Containing the Cowboys inside and forcing Oklahoma State into long jumpers and threes could be the key to a victory for the Crimson. The Cowboys only shot 29.7 percent from behind the arc during the regular season–328th in Division I.

Oklahoma State was middle-of-the-pack nationally in overall shooting percentage, while Harvard’s 47.7 percent was 14th-best in the country. The Crimson also ranked second in the nation in free-throw percentage, but went just 10-of-16 from the line against the Tigers.

Cowboys coach Travis Ford said he had seen Harvard’s 16-point win over Colorado while scouting the Buffaloes earlier in the season and came away impressed.

“[The Crimson], from everything we’ve heard, they’ve been a buzz of college basketball the last couple weeks, as far as a team that’s had an incredible year,” Ford told NewsOK.

The game will be the only NIT first round matchup televised on ESPN, and Harvard has never appeared on the network before. Harvard has also never played Oklahoma State in basketball.

“We’re excited to play in the postseason,” Webster said. “I know a lot of people don’t get that chance.”

If Harvard tops the Cowboys, it will take on the winner of Wednesday’s game between Washington State–the two-seed in the region–and Long Beach State, the 11 seed.

The No. 1 seed in the Crimson’s region is Boston College, whom Harvard has defeated in three consecutive years, including a 78-69 win in Chestnut Hill on January 5 of this season.

Crimson coach Tommy Amaker won the NIT with Michigan in 2004. Harvard has a long way to go to get to that point, but McNally and Webster both said they would move on and not let Saturday’s buzzer-beating defeat linger in their minds.

Instead, after being snubbed from the NCAA tournament, the Crimson now feels it has something to prove in the NIT.

“We had a good chance to get the tourney, but we put ourselves in a bad position [by losing],” McNally said. “We’re in the NIT. We’re happy with the chance to keep playing, and obviously that’s where we’re at right now.”