Hockey Seniors: Brothers On and Off Ice 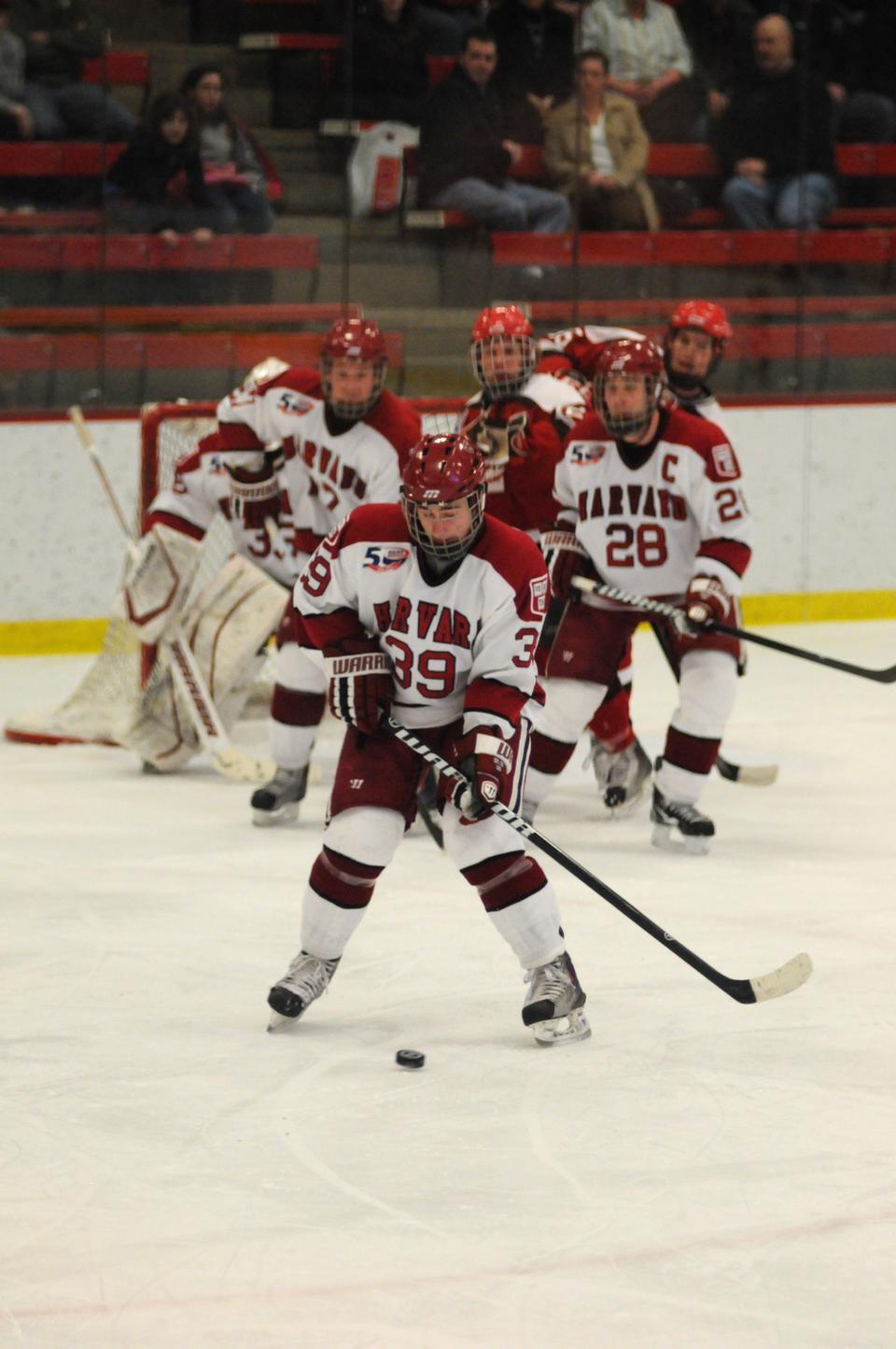 Pier-Olivier Michaud, pictured above in earlier action, and his fellow six seniors on the Harvard men’s hockey team have formed a strong bond beyond the rink during their years in Cambridge.
By Alexander Koenig, Contributing Writer

The sky is low on a typical grey Sunday afternoon in Cambridge. Senior Michael Biega is sitting in his third floor Pforzheimer House room, holding court as challenger after challenger falls to his mastery of the Xbox 360.

“It really doesn’t matter the game, from Call of Duty to NHL, he’s really a dominant force,” remarks Michael Del Mauro, another blockmate. “I don’t think anyone has been able to top him.”

The scene isn’t much different from that of any number of college dorms; ask any Harvard student and he or she will tell you about that friend. But what is more remarkable about Chris, the two Michaels and their other blockmates—Matt McCollem, Pier-Olivier Michaud, Ryan Carroll, and Kyle Richter—is that in addition to being friends, roommates, and Call of Duty combatants, they have spent the last four years together on Harvard’s hockey team.

The seven of them are part of a senior class that has been through some tough times on the ice.

“They’re a great group of kids who have all suffered from unfortunate health problems throughout their careers here,” says crimson coach Ted Donato ’91.

But last Saturday on Senior Night, they put those times behind them as Biega, Del Mauro, and Michaud each scored once to lead Harvard to a 4-3 victory over St. Lawrence—their fifth win in the past six games heading into their ECAC playoff series with Clarkson this weekend.

“They persevered and fought through it all to allow for this little run we’re on right now,” Donato says.

“Our friendship, and how it’s translated to our entire team being so tight with each other, hasn’t always translated to success on the ice, but it’s definitely an important factor on any team,” Del Mauro adds. “Not having this team dynamic would be a recipe for disaster.”

When the seven arrived on campus in the fall of 2007 along with their eighth blockmate Sam Bozoian—who skated for the Crimson through his junior year—their only knowledge of one another was through word of mouth about their hockey prowess.

“We knew each other peripherally coming up through the ranks in hockey,” Del Mauro remembers. “It didn’t take very long for us to transition from being teammates to being something much greater than that—being friends.”

Though it was hockey that brought them all together and it is their team commitments that ensure they stay together for large parts of every day, they are quick to point out that their friendships go far beyond what it means to be on a team.

“We have a strong group relationship with inside jokes and established roles, but individually we all also have close friendships,” Del Mauro notes. “They’re not built purely on the fact that we are part of a team, or group; they transcend that and are meaningful one-on-one relationships with each other. It trickles down into the entire team where there is a strong group dynamic that doesn’t stifle individual connections.”

Coaches are always looking for that intangible ingredient to success: team chemistry. Donato attributes the squad’s recent success to the abundant locker room cohesion finally coalescing and manifesting itself on the ice.

“The chemistry in the locker room has always been excellent and in the last few weeks the chemistry on the ice has been much improved,” Donato says. “This group started the season with the intention of including everyone on the team and treating them with respect, and it’s great to see that showing on the ice.”

While the most important part of its season lies ahead, the group is still dealing with something all too common among seniors this semester: figuring out life after Harvard.

“These guys are and will always be my closest friends, and I definitely attribute my incredible time at Harvard to my relationships with them and the rest of my teammates,” Del Mauro says as his tone shifts from excitement over what the future holds to the realization that no matter the result of their series against Clarkson, the end of their time together with the Crimson is drawing nearer.

In a college sports culture so obsessed with winning that adults routinely compromise their morality in the pursuit of victory, it is encouraging to see a group of friends doing what they love for the right reasons.

“I’d rather lose with these guys than win anywhere else,” Del Mauro says.