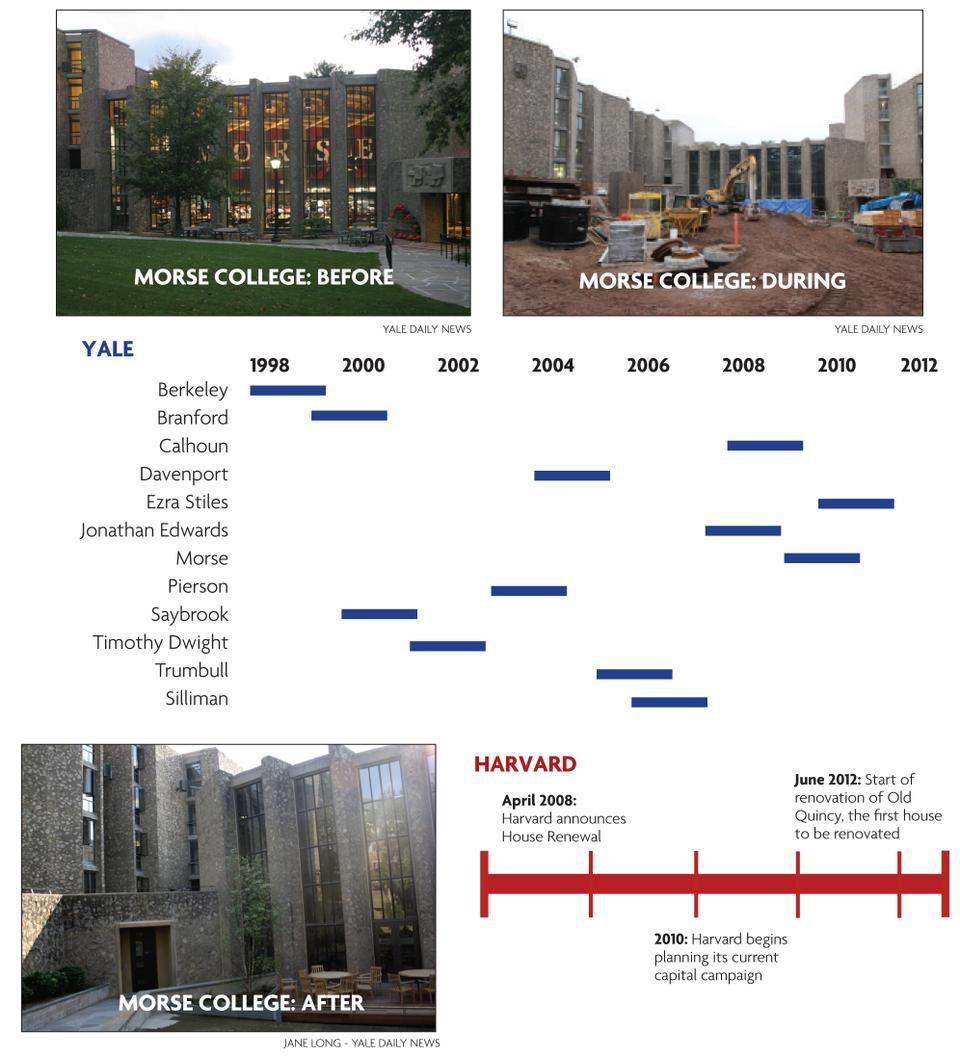 As a junior at Yale University, Willis “Chip” Arndt Jr. lived with eight other people in a dorm room that had originally been built to house only four.

Arndt, a resident of Calhoun College who graduated from Yale in 1990, describes the Calhoun he lived in as “antiquated.”

“People were living on top of each other,” Arndt says.

According to Arndt, in addition to a lack of space and leaky faucets, Calhoun failed to provide adequate accommodations for female students after Yale began admitting women in 1969.

Yale attempted to hastily renovate Calhoun College in 1989, planning construction in the summer months in order to minimize the impact on students. The original renovation was incomplete and required far more money and resources than Yale had anticipated.

“Corners got cut in ’89,” Jon E. Olsen, the project manager overseeing the 2008 renovation of Calhoun, told the Yale Daily News that year.

By the end of the century, when even the youngest colleges began to show wear and tear, Yale decided to embark on the ambitious renovation of all of its residential colleges. The construction process would cost Yale University about $1 billion and take over a decade to complete.

Harvard’s 12 Houses and Yale’s 12 colleges both serve as academic and social communities. Furthermore, the residential systems at these two Ivies trace their roots to donations from the same philanthropist—Yale alumnus Edward S. Harkness.

And the systems will soon take similar paths yet again, as House renewal at Harvard—which is slated to begin with the renovation of Old Quincy House as a test case in June of 2012—represents an undertaking similar in mission and in scope to the renovation of the residential colleges at Yale.

Although the plans for Harvard are far from finalized, those involved with House renewal have said that they have gained insight from observing the experiences of Harvard’s longtime rival.

LESSONS FROM A NEMESIS

Housing systems at Harvard and Yale are quite comparable. Although Yale assigns its students to their colleges before the beginning of freshman year, both universities provide upperclassmen with a similar residential experience, including dining halls, common rooms, and traditions.

Members of the committee that drafted the 2009 Report on Harvard House Renewal, which developed recommendations for House renovations, toured recently restored undergraduate dormitories at Yale and Princeton. According to Quincy House Master and committee member Lee Gehrke, the tours were helpful in teaching them about residential renovations, although the final plans, he says, will be “distinctly Harvard.”

“We have learned a great deal from Yale and Princeton about what worked and what didn’t work,” Gehrke said in January. “So I feel very confident that what happens will be very good for Quincy and for the entire housing system here at Harvard.”

Having realized the impracticality of renovating an entire residential college in a single summer after its experience with Calhoun College in 1989, Yale decided to embark on a new and comprehensive series of renovations.

The university began work at Berkeley College in 1998 and, from then on, proceeded to renovate a different college at the rate of about one per year, with each college taking an average of 15 months to complete.

Similarly, the renovation of Old Quincy House is projected to take 15 months in total, according to a January Harvard press release.

As the 2012 start date for the renovation approaches, Harvard administrators have confirmed that accessibility for students with disabilities and sustainability efforts will likely be among the initiative’s top priorities.

Yale contractors attempted to integrate more beds into each College as part of a larger effort to increase the size of Yale’s undergraduate class. No similar goal has been reported for the Harvard renovations.

Jonathan S. Holloway, master of Calhoun College, says that these issues, in addition to bringing facilities up to fire code, were extremely important during the Yale residential college renovation.

“This was an opportunity to physically restore the buildings and to make them better adapted to the lifestyles of late 20th century and early 21st century students,” Yale School of Architecture Dean Robert A. M. Stern says.

With goals akin to those of its counterpart in New Haven, Harvard has retained the services of the same architectural firm behind the renovation of half of the Yale colleges. KieranTimberlake, a Philadelphia-based company, has also tackled projects at Cornell, Middlebury, and the University of Pennsylvania as well as at the Sidwell Friends School in Washington, D.C.

A MATTER OF MONEY

In September 2006, Yale announced an ongoing capital campaign that seeks to fund improvements across the university, including renovations to its residential colleges. The campaign, known as “Yale Tomorrow,” aims to raise $3.5 billion by July 1, 2011.

That the university had to embark on a capital campaign to fund the large-scale renovations speaks to the enormous costs associated with residential renovations.

Estimates for the price tag of House renewal at Harvard have hovered between $1 billion and $1.3 billion. At Yale, the university had invested over $500 million into the construction process by November 2007, with four colleges then yet to be renovated.

Even after Yale’s endowment plummeted during the financial crisis—falling by nearly a quarter to $16.3 billion in the 2009 fiscal year—Yale refused to scale back on the construction, according to Morse College Master Frank C. Keil.

“The president and the corporation were convinced that because [college renovation] had been so successful in the past, they weren’t going to cut back,” Keil says.

Harvard faced a 27.3 percent loss in its endowment during the 2009 fiscal year—the largest single year decline in its history—but amid that decline, Harvard administrators similarly continued to assert the importance of House renewal. In an op-ed in The Crimson at the end of 2008, Harvard President Drew G. Faust, Faculty of Arts and Sciences Dean Michael D. Smith, and Dean of the College Evelynn M. Hammonds reiterated their support for House renewal, vowing to ensure that “Harvard’s nearly 80-year-old experiment in House life continues, updated and energized.”

Harvard is in the midst of launching its own capital campaign, with the primary goal of raising money for the renovation of the Houses, administrators say. One senior FAS administrator says that the fundraising goal of the newest campaign will likely surpass records.

A lingering question that looms over House renewal is where to house the 180 students that will be displaced by the renovation of Old Quincy. In the January press release that announced the upcoming construction in Old Quincy, Harvard said that these students could potentially live in Harvard Real Estate Services-owned buildings.

But regardless of the plans that FAS devises to accommodate residents of Old Quincy, the renovation of full Houses will force far more students from their rooms, meaning the challenge of temporary housing will likely persist throughout renewal efforts.

Yale faced a similar dilemma during its renovations.

Yale elected to construct a brand new building—a “swing space”—where students would reside during the year that their college was being renovated.

Originally the building was intended to be temporary, but Holloway says that “it’s been so successful that it’s going to be there for a long time.”

No matter how Harvard solves the issue of swing housing, Gehrke says that it will likely be detrimental to Quincy House’s sense of community.

“During those 15 months, some of our students are going to be living in swing space, and we want to make sure that the Quincy community is still unified and that the students feel that they still have a House that welcomes them and that they’re excited about,” Gehrke said in January.

Some Yale students liked the modernity and novelty of their swing space, but others brought up the difficulty of maintaining a social atmosphere that Gehrke mentioned.

“It’s not a community,” says Kevin D. Adkisson, a junior in Morse College who lived in the swing space during construction. “We didn’t really bond much as a college.”

Yale college masters attributed the lack of community to the absence of a dining hall in the swing space. “The dining hall is the lifeblood of the college,” Keil says.

During construction at Harvard, those displaced from Old Quincy will still eat in the Quincy House dining hall, located in New Quincy.

‘A SHOT OF ADRENALINE’

Keil says that the renovation of the residential colleges “really has been a shot of adrenaline for the entire college.”

Keil’s own Morse College, which reopened this past fall after extensive construction, now contains a 120-foot theater, numerous skylights and floodlights, and a waterfall in the courtyard.

Each renovated college has a number of modern amenities, including fully-equipped gyms, dance and recording studios, and art galleries.

Though no comparable modifications to the Harvard Houses have been confirmed, “plans must recognize the place the Houses hold in our history even as they clear the way for future growth—both personal and physical,” Faust, Smith, and Hammonds wrote in the 2008 Crimson op-ed.

The 13-year renovation of Yale’s residential colleges is slated to conclude this year with the completion of Ezra Stiles College, but despite the fact that the official timeline for construction is almost finished, masters say that in reality the process is far from over.

Steven B, Smith, master of Branford College—the second college to be renovated—says parts of his building had to be redone even after Yale officially opened the renovated building.

“There were problems that started to come up a year later,” Smith says.

Construction on Morse College ended this past year, but Keil says that he expects that it will take well over a year to fix the “unanticipated” problems, which he says range “from toilets that don’t flush to lights that don’t go off.”

Although administrators have reaffirmed their commitment to renovating the Houses, the details of House renewal’s future remain uncertain. Harvard has yet to set a timeline for the remainder of House renewal or to finalize renovation plans for Old Quincy.

“Because the process is currently ongoing, there are no final decisions about specific designs to report at this time,” FAS spokesperson Jeff Neal wrote in an e-mail. “I expect we will have much more information about specific design concepts to share with the Harvard community and with The Crimson in May.”

Until then, according to Neal, architects are in the process of drafting plans and soliciting feedback from students, faculty, and staff across the College. Even with extensive preparations, however, any plan may face a surprise or two.

“The renovation of old buildings always presents unexpected challenges,” Yale University Planner Laura A. Cruickshank wrote in an e-mail. “So the rule of thumb is to ‘expect the unexpected’ and build time into the schedule to address the issues that arise.”