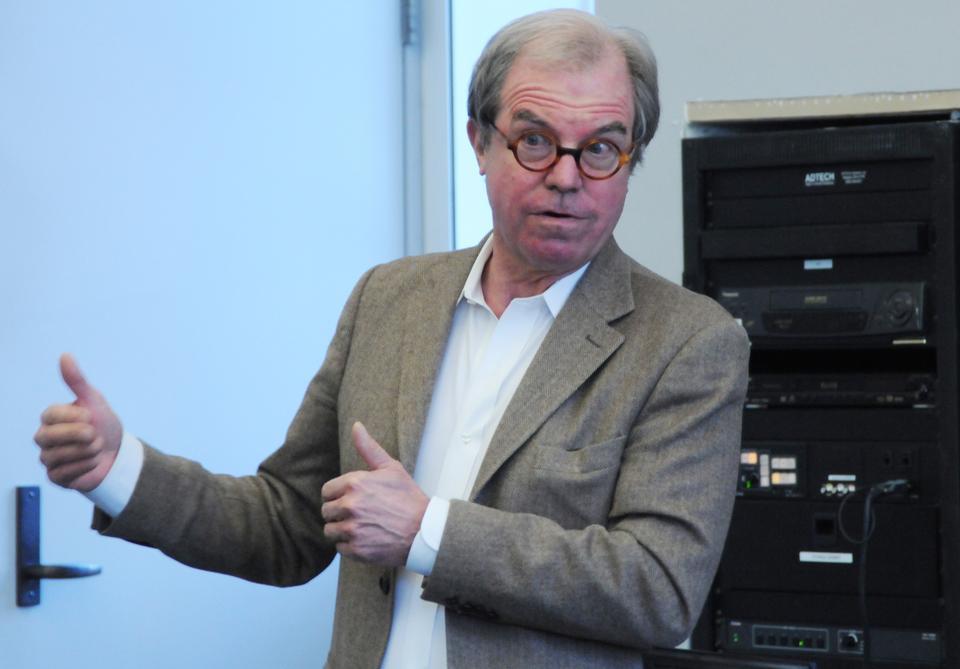 Nicholas Negroponte, founder of One Laptop Per Child, discusses his social enterprise company and the difficulties it has encountered before an audience of student leaders in Harvard Hall.
By Alexander B. Stein, Contributing Writer

Nicholas P. Negroponte, the driving force behind One Laptop Per Child—the non-profit organization that provides low-cost laptops to children around the globe—recalled the entrepreneurial obstacles he faced despite his philanthropic mission.

His presentation, jointly sponsored by the Harvard Undergraduate Women in Business and the Leadership Institute at Harvard College, provided students an opportunity to engage with a successful social entrepreneur and hear about the difficult progress Negroponte’s organization has made since its formation in 2005.

The OLPC has provided low-cost laptops to 2.5 million children in 40 countries since 2005, but Negroponte said the path has been challenging.

He said his concept of a cheap laptop was initially dismissed, but contacts he acquired while working at MIT since the late 1960s helped the project gain traction.

Still, it lacked commercial interest until word of the project began to spread.

He soon drew interest from long-established computing giants Intel and Microsoft, he said, introducing competition into the market and providing new, unforeseen challenges for his philanthropic organization.

“The real difference was between thinking about children as a mission versus a market,” Negroponte said.

He said he expected his organization’s “Mother Theresa shield”—the protection afforded by OLPC’s partnership with the United Nations and what he considered the goodwill of its cause—would help the organization avoid the corporate pressure.

In addition, Negroponte said, the OLPC met criticism on how they were verifying their project’s success, lacking evidence showing that giving a kid a laptop and walking away is a successful strategy.

Negroponte and the OLPC are now addressing this concern, he said, by implementing empirical research to see if children will learn to read—and read to learn—when given a laptop to use at their whim.

The OLPC project arose, Negroponte said, from an observation of a friend and MIT mathematician Seymour A. Papert, an early pioneer of artificial intelligence.

Papert, in his research on technology and learning, observed that programming and debugging computer software offered children incredible learning experiences.

Together, Papert and Negroponte brought this insight to Senegal and Pakistan, where they offered children the opportunity to use computers and were blown away by the pace at which they learned how to operate them, Negroponte said.

“These kids played the computers like pianos,” he said.

Audience member Tina Liu ’11, who said she is interested in a career in social enterprise, said she viewed OLPC’s story as a reality check.

“It was surprising to see a non-profit with a glorious mission meet such obstacles,” she said. “But at the same time, their success is very encouraging.”