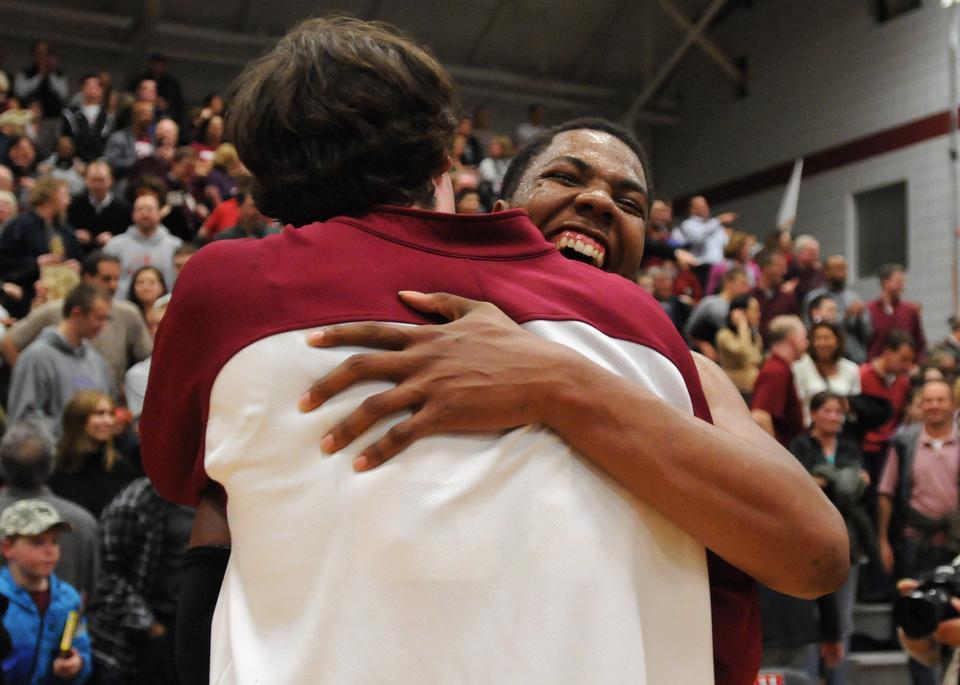 Among the myriad recruiting advantages held by Harvard basketball coach Tommy Amaker, perhaps the most enticing has been the long-standing opportunity for his players to rewrite history.

Since the Ivy League’s inception in 1954, the Crimson had been the only team in the Ancient Eight to never have won a conference title—until Saturday night.

In Amaker’s fourth year at the helm, he and his young squad finally earned their spot in the record books, clinching at least a share of the league crown with a 79-67 defeat of rival Princeton (23-6, 11-2 Ivy) at Lavietes Pavilion.

A sold-out crowd of 2,195–including former Harvard star and current Golden State Warrior Jeremy Lin ’10 and University President Drew Faust—witnessed the Crimson (23-5, 12-2) establish a program record for most victories in a season and, in the process, erase 99 years of men’s basketball futility.

“This was something that has never been done,” sophomore forward Kyle Casey said. “A lot of people have tried, come close, and put in a lot of work and determination to try to do what we’ve done this season so far. It was beyond just our team and our players and our coaching staff; it was for everyone that’s been through this program.”

The dream season has not quite yet been completed, as the Tigers will close out their regular season against Penn Tuesday night. If Princeton wins in Philadelphia, it will share the Ivy title with Harvard and enter a one-game playoff for the league's automatic berth in the NCAA tournament.

For the time being, Harvard can only savor the fact that it brought its best effort in a nationally televised Ivy heavyweight bout, a game many viewed as the biggest in school history.

The atmosphere certainly felt like one for the ages. After junior co-captain Oliver McNally grabbed the last rebound of the night, a raucous student section of 400 strong swarmed him and his teammates on the court, where Harvard had shot a blistering 60 percent from the field for the game, including 4-of-8 from beyond the arc.

But the biggest baskets of the evening came inside the paint, as the Crimson was powered by the big man Casey’s season-high 24 points.

The reigning Ivy Rookie of the Year was instrumental in facilitating a turnaround from the teams’ previous conference matchup. One month ago in New Jersey, the Tigers used a 19-2 run between the end of the first half and the start of the second to establish a commanding 11-point lead that all but doomed Harvard to a crushing road loss.

This time, it was the Crimson that came out of halftime on a tear. After conceding a layup to Princeton sophomore Ian Hummer in the frame’s first minute, Harvard jumped out on a 14-6 run to turn a one-point deficit into a seven-point advantage.

It was the first extended spurt by either team in a contest that featured 18 lead changes in the first half, during which both squads shot over 50 percent.

As the visitors’ shooting touch both inside and out grew cold—the Tigers hit 38.7 percent in the second half—Harvard’s star sophomores turned it on, determined to fulfill their pledge made two years ago: to bring a championship to Cambridge.

With under 17 minutes to play in the second half and his team up by two, Casey received the ball in the right corner, where he pump faked his defender into the air and drove baseline before finishing with a one-handed dunk, his crowd-pleasing three-point play propelling Harvard to a 47-42 lead.

“It gave us incredible momentum,” guard Brandyn Curry said of the slam. “I saw him set up for a three, and I thought, ‘This is going to be ugly.’ But then he went in for a ‘SportsCenter’ dunk. I think that changed the game.”

The next offensive possession, Casey again kept it himself, driving hard down the lane to draw a foul, with his pair of free throws maintaining the lead at five.

At that point it became time for Casey’s classmate Curry to shine. The league’s assist leader stole the ball from Princeton powerhouse Kareem Maddox, then delivered a nifty behind-the-back flip on the fast break to a streaking McNally, who was fouled and hit both free throws to build Harvard's lead up to 51-44.

Curry, who had 10 points and a game-high 10 assists on the evening, went on to find rookie Matt Brown on the left wing for a three with the shot clock winding down, extending the home advantage to nine two and a half minutes later.

Maddox drove straight at his defender on the next play, drawing Casey’s third personal foul. After the Tiger made 1-of-2 from the line, Curry went coast to coast and sneaked in a left-handed layup to make it 58-48, giving Harvard its largest lead up to that point.

Both teams traded baskets for several minutes until a Casey pull-up jumper off a screen on the right side pushed Harvard up to 64-52 at the under-10 minute mark.

Princeton proceeded to tighten up defensively, forcing turnovers on the Crimson’s next four offensive possessions. Yet it had trouble taking advantage until senior guard Dan Mavraides, who had a masterful 18-point performance in the first half and finished with 25, sank his fourth three of the night at the six-minute mark. A free throw by Hummer cut the lead to 64-59 with five minutes to play.

But Curry relied on his dribble penetration to subdue any comeback hopes, getting into the lane and hitting an acrobatic layup while being fouled. Curry’s basket and ensuing free throw, followed by a layup by junior co-captain Keith Wright, had the lead back to 10 at 4:22 to go.

Harvard, the second-ranked free throw shooting team in the country, went on to drain the requisite attempts from the charity stripe and bring to rest a long chapter of Harvard basketball history—and, perhaps, start a fresh one.