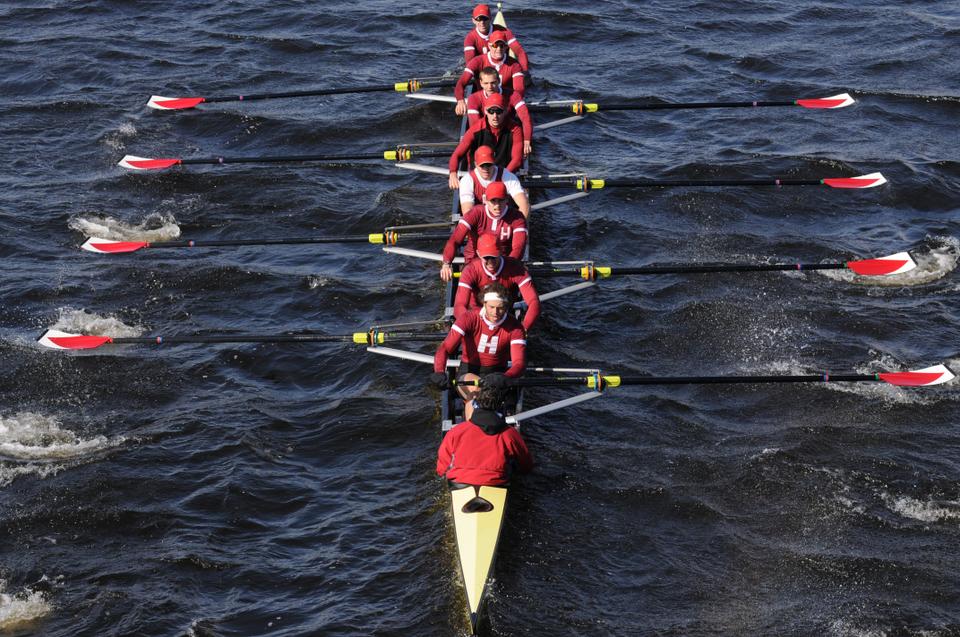 Shown here in an earlier race, the Harvard heavyweights swept rival Brown in five events on the Charles this weekend, taking back the Stein Cup and avenging its only varsity dual loss of last season. The lightweight crews found similar success against Georgetown and Penn, dropping only two races. By Sarah E Amanullah
By Christina C. Mcclintock, Crimson Staff Writer

For Harvard crew, perfection is never far away. And in both teams’ second weekends of racing, the varsity crews finished with clean sweeps over their competition. Only losses on Sunday by the freshman lightweights kept the Crimson from a flawless weekend.

“We definitely put some stuff together,” said junior Austin Meyer, seven seat of the lightweight first varsity eight. “It was all around a really powerful weekend.”

No. 2 LIGHTWEIGHTS vs. No. 4 GEORGETOWN

How much of a difference can two spots in the rankings make?

More than a boat length.

“We took a length on Georgetown in the first 500 meters,” Meyer said of the first varsity eight race. “We really shot out and sat on Georgetown and just kind of responded whenever they tried to move, and we were able to pull away.”

“The 3V was tenacious,” said Crimson freshman coach Linda Muri. “They raced in that and did a very strong showing.”

Harvard’s only losses of the weekend came in the two freshman races. The 2F raced Georgetown in an eight after racing in fours the day before.

“I thought that was a remarkable performance,” Muri said of the 2F. “They really rolled with the punches all weekend.”

LIGHTWEIGHTS vs. No. 10 PENN

A race originally intended to be a stroke-for-stroke battle turned into a blowout.

Saturday’s race had originally pitted Harvard against No. 3 Cornell and the Quakers, but the Big Red canceled its trip to the Schuylkill for undisclosed reasons.

Penn might be wishing that it too had canceled the trip to its home river, after it was swept by the Crimson.

Not only did Harvard win all of its races, but the Crimson’s second and third varsity eights posted times that were better than those of the Quakers’ first and second varsity eights, respectively.

“We went into the race knowing that we should win,” Meyer said of the first varsity eight race, which his boat won by 8.7 seconds. “We got a strong start and had a nice, cool, relaxed, powerful rhythm.”

The second varsity eight was even more dominant, winning the race by 13.2 seconds.

“Overall it was a great show of our depth and the commitment of all our guys—all the guys in the boat club—to have a sweep of Brown, which hasn’t happened in a while,” said junior Nick Jordan, who rowed in the six seat of the first varsity eight.

The first varsity eight opened up the day with a 2.6 second win a year after the Bears dealt the Crimson 1V its only dual loss all season.

But in the middle 1000 of the race, the Bears were able to push their bow back into Harvard’s hull.

“We took it a little high off the start, and then in the middle of the race, we got a little bit complacent,” Jordan said. “They sort of moved back to a third of a length of overlap, and we sprinted away from them to maybe a full length. It was good to get a win, but we thought we could have put together a better performance, overall.”

The second varsity eight race had no such drama; the Crimson won by almost 12 seconds.

“They just smoked them,” Jordan said. “They just held them off the start and were taking a seat every three strokes, and they didn’t stop the entire race ... That was really fun to watch online.”

The 2V posted the biggest win of the day, while the third varsity eight, freshman eight, and fourth varsity/second freshman eight all defeated their Brown counterparts to ensure the sweep.