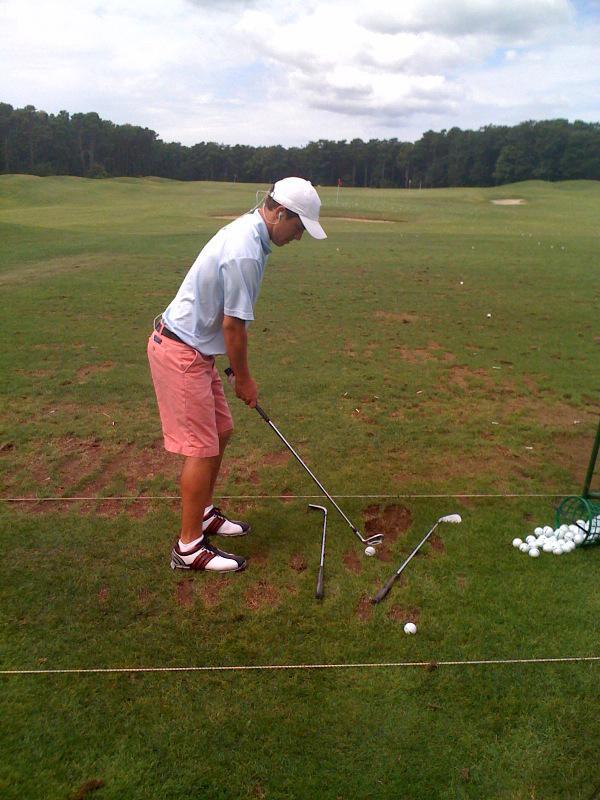 Junior captain Tony Grillo, shown above in previous action, was not pleased with his team’s performance at the Princeton Invitational this past weekend. Harvard finished in the bottom half of the pool. By Courtesy 429 Records
By Kenny A. Lee, Contributing Writer

With little wind, temperatures in the upper 50s, and sunshine over the weekend at the Princeton Invitational, the conditions boded well for low scores on the green. But the winds did not blow in the right direction for Harvard, as its men’s golf team finished eighth out of 12 teams.

“The tournament did not go very well for us,” junior captain Tony Grillo said. “We flat out didn’t play well enough to win. It was uninspiring performance.”

The Crimson finished with a score of 894, 46 strokes behind tournament-winner Yale. Harvard was unable to put together three solid rounds of golf in order to come out on top.

The lowest point total for the Crimson was posted by junior Mark Pollak, who led the team with a score of 218 (+5), placing 12th in a field of 68. The tournament winner, Bulldogs freshman Sam Bernstein, shot 208, five under par and 10 strokes ahead of Pollak.

In the first round, Harvard came out relatively strong, as it finished tied for fourth with a total of 295, but a less-than-perfect second round of 305 put the Crimson in a hole that was too deep for it to recover.

“The short game was a problem, especially putting,” Grillo said. “The guys didn’t have a good feel for the holes.”

Par-four holes were tough on Harvard as it recorded a +48 for those holes in the tournament, 10th among the field. Par-three and par-five holes were better for the Crimson as it finished +16 and +3, respectively.

Harvard ended the tournament with the most pars, but it posted no eagles and only 24 birdies. Pollak led the team with 43 pars.

Pollak and freshman Theo Lederhausen were the bright spots in a disappointing showing by the Crimson. Lederhausen ended up in the 29th spot. He started off strong in the first round with a 72 (+1), but the second round was costly as he finished with a score of 82 (+11).

In the third round, he returned to form with a 70 (-1), putting him at 11 strokes over par for the entire tournament.

“The first and third round, I worked my way around the course better,” Lederhausen said. “I putted much better in those rounds. I had a lot of three-putts in the bad round, and I kept piling on mistakes.”

Other notable competitors for Harvard included Grillo, who finished 37th with a 227, and freshman Seiji Liu, who placed 40th and shot a 228. Sophomore Max Campion rounded out the five team competitors for the team, placing 56th with a 235.

The Crimson was sixth out of the Ivy teams competing, so it will look to improve before the upcoming Ivy League Championships.

Yale and Penn were the class of the Ivy League this past weekend. The first- and second-place teams, the Bulldogs and the Quakers both finished 30 strokes ahead of third-place finishers Georgetown and Princeton. The rest of the Ivy League was within 17 strokes of one another.

“For the next two weeks, we’ll see a bunch more Ivy League teams,” Grillo said. “Hopefully, we can play well. We just need to put some rounds together. One guy is usually playing well, but we need everyone to come together and play well for three straight rounds.”

Next week, Harvard will be participating in the Century Intercollegiate tournament at the Century Country Club.

“We’re just trying to forget about this week and play better next week,” Lederhausen said. “We’re just going to keep doing what we’re doing. Hopefully, we pick up speed at the right time.”