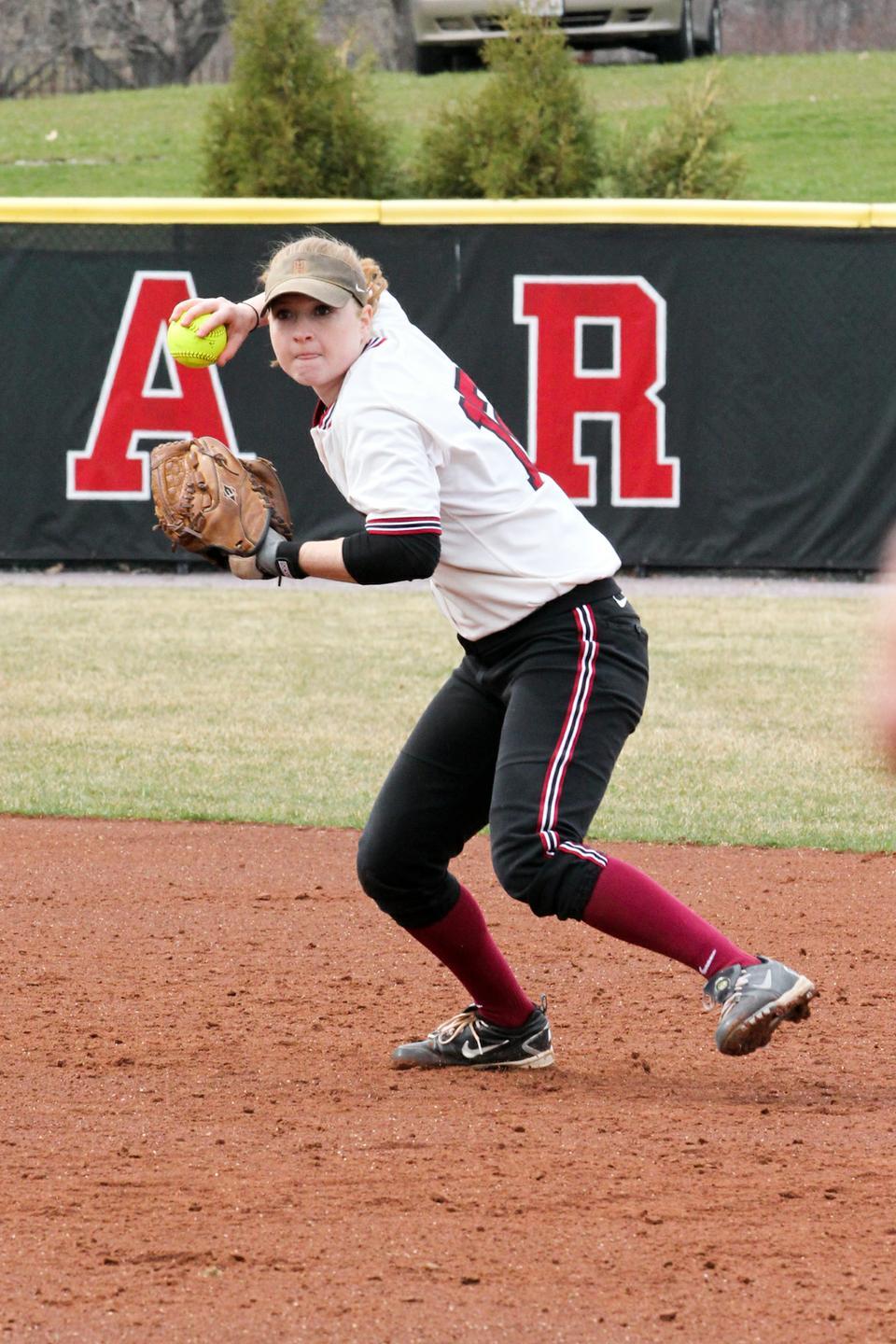 Co-captain Ellen Macadam boasts the best hitting average on the team at .411. This weekend, the senior showed her power at bat, homering off a pitch from Cornell’s top hurler, Elizabeth Dalrymple.
By Kate Leist, Crimson Staff Writer

If Saturday’s matchup between Ivy League softball powers Harvard and Cornell is any indication, the race for the Ancient Eight crown will be another close one.

In a rematch of last year’s championship series, the Crimson (20-12, 6-2 Ivy) and the Big Red (16-14-1, 5-3) split a doubleheader at Soldiers Field on Saturday afternoon. Cornell ace Elizabeth Dalrymple was the hero of Game 1, carrying her team to an 8-1 victory, but Harvard’s potent offense finally broke out late in Game 2 in a 7-5 win for the home team.

“I love to play [the Big Red],” Crimson coach Jenny Allard said. “I think they’re a great ball club, and you’ve got to come to play, you’ve got to put your battle gear on and fight. And both teams fought hard.”

With two outs in the bottom of the sixth inning and with a 4-2 lead, it looked like Dalrymple was on her way to her second win of the day. But freshman Allison Scott drew a walk that sparked a five-run rally, securing a 7-5 win and the series split.

“Everyone had some adjustments to make individually, and in addition to that, [we had] a better collective energy to just attack [Dalrymple] and not be intimidated by her stats,” co-captain Ellen Macadam said.

After Scott’s walk, classmate Shelbi Olson came to the plate and connected for her first collegiate home run, a bomb to right field that tied the score at four.

“Shelbi really stepped up,” Allard said. “She’s been inconsistent a little at the plate, and it was nice to see her see a pitch and really just take a good cut.”

Back-to-back singles from junior Jane Alexander and freshman Jackie Cooley kept the rally going and brought Macadam to the plate. Macadam, the team’s hottest hitter with a .411 average, then sent another Dalrymple pitch over the fence in right-center to give Harvard a 7-4 lead.

“I attribute all of that to Jane and to Jackie for keeping that rally going with two outs,” Macadam said. “That’s what our team is, that’s what we can be.”

Macadam’s homer chased Dalrymple from the game, and though reliever Jenna Stoller allowed a pair of singles, she got junior Whitney Shaw to pop out in foul territory to escape the jam.

Cornell had jumped out to an early 1-0 lead in the first inning, when Jenny Edwards hit an RBI double off junior pitcher Rachel Brown. Rookie Laura Ricciardone relieved Brown and, after allowing a single to the first batter she faced, retired 14 straight Big Red hitters.

“We got Laura in there quickly, and Laura did a really good job of hitting her spots and keeping them off balance,” Allard said. “And they’re a good hitting club. She did a great job.”

Cornell finally strung some hits together in the top of the fifth, with Edwards once again providing the punch with a 2-RBI double to right. Erin Keene then plated Edwards with a single down the first-base line.

The Big Red added a fifth run in the seventh inning, but Ricciardone held on for her seventh win of the season.

Cornell dominated Game 1 from start to finish, with Dalrymple shutting down Harvard’s lineup and the Big Red coming up with a series of big hits in an 8-1 win.

After both pitchers cruised through the first two innings, Brown ran into trouble in the third. Marissa Amiraian put Cornell on the board with a triple down the first-base line and came around to score on an Edwards single. Kristen Towne got on base with a single to shallow right, and Erin Belles then broke the game open with a three-run dinger to left field.

The Crimson got one back in the fourth, when junior Mari Zumbro drove in sophomore pinch runner Kassy Shiotani with a double to left. But that was as much offense as Harvard could muster against defending Ivy Pitcher of the Year Dalrymple, who finished with 10 strikeouts.

“We didn’t come out attacking her,” Allard said. “I thought we didn’t swing aggressively early in the count. She’s a phenomenal pitcher, and we just need to come out with a tougher attitude.”

The Big Red padded its lead on an Ali Tomlinson single in the sixth inning and extended the advantage to 8-1 in the seventh inning with a pair of runs off junior reliever Julia Moore.

The split puts both squads in control of their respective divisions heading into divisional play, which begins next weekend.

“This was great to come out confident, but since we got beat both [Friday] and [Saturday], we know we can’t just show up and win,” Macadam said. “We know not only are we capable of winning, but we have to beat these teams—and we know we can do it.”