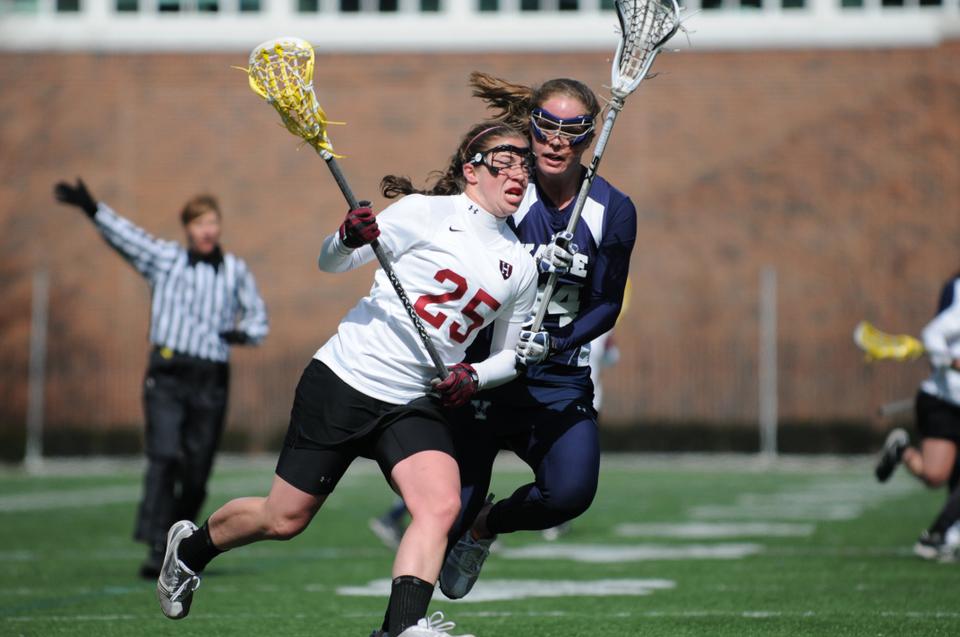 The Harvard women’s lacrosse team hit the road and traveled to Providence, R.I., following a successful 3-1 homestand that included a six-goal comeback victory against New Hampshire that left the Crimson at .500.

After falling behind, 7-2, the Crimson stole the momentum from Brown thanks to sophomore Danielle Tetreault’s five goals and defensive adjustments, grabbing a 12-9 win.

“We’ve been [making comebacks] a lot lately, I think because we’ve been having some slow starts,” sophomore Jennifer VanderMeulen said. “We were not going to lose to Brown because ... every Ivy game we come into with a fight and just refuse to lose.”

Tetreault came out of the gate ready to score.

Two minutes and 19 seconds into the first half, the midfielder put away the first point of the game on a free-position shot.

But the Bears responded with an unassisted goal just over a minute later, as the Harvard quad lacked its usual energy and vigor early in the game.

“We started out slowly, and Brown took advantage of that,” VanderMeulen said. “It’s not an excuse, but getting off the bus, we had a hard time getting started.”

Tetreault kept the Crimson in the game while her teammates livened up. She put Harvard back into the lead at 2-1 with another free-position score at the 4:57 mark.

“Danielle took the team on her back a little bit [Friday],” junior tri-captain Melanie Baskind said. “Especially at the beginning of the game when we weren’t doing well, she just said, ‘Enough is enough, time to start fighting back.’”

But Bears freshman Danielle Mastro countered Tetreault’s two goals with a pair of her own.

And Brown rallied to score four unanswered goals to grab a 7-2 lead, keeping Harvard scoreless for the majority of the half.

This year, the Crimson team has proven itself capable of comebacks and in the final 2:35 of the half, it did just that.

With one less player on the field due to a card, the Crimson racked up three goals as the final seconds of the half ticked away.

The half closed with Harvard trailing, 7-5, but with the momentum in the Crimson’s favor.

During halftime, Harvard altered its defense and returned to the field with a dominate presence on the defensive end. The Bears struggled to shake the aggressive Crimson defense and took only two shots within the first 25 minutes of the second half.

In addition to the defensive adjustment, the Crimson underwent an offensive reform during the break as well.

In the second frame, Harvard—which entered the contest 21st in the country and first in the Ivy League in scoring offense—began to produce offensively.

Over a period of nearly 23 minutes, the Crimson scored seven goals and pushed to a 12-7 lead.

Tetreault continued towards her game-leading total of five goals for the night, notching the first two scores of the second half and tying the game at 7-7.

Just over two minutes later, sophomore Nina Kucharczyk chipped in a point to give Harvard its first lead, 8-7, since five minutes into the game.

“Nina’s incredibly fast and really used her speed to her advantage,” Baskind said. “The more confident she gets, the more goals she’s going to put in for us.”

In the next 10 minutes, VanderMeulen and Baskind completed the Crimson’s 7-0 run. Each player found the back of the net twice, with VanderMeulen’s two scores sandwiching Baskind’s back-to-back set.

Brown put itself back up on the board, scoring twice more in the remainder of the half, but the Crimson lead proved insurmountable when the game concluded, 12-9.

With the victory, Harvard passes the halfway point through the toughest part of its season.

Only two nationally ranked teams are left on the calendar, which was deemed the 14th most difficult schedule in Division I. Still, Harvard looks forward to only more successes and recovery on the horizon.

“We’re dealing with some injuries right now, but looking forward to the rest of our games and having everyone step up and make up for who’s not out there,” Baskind said.