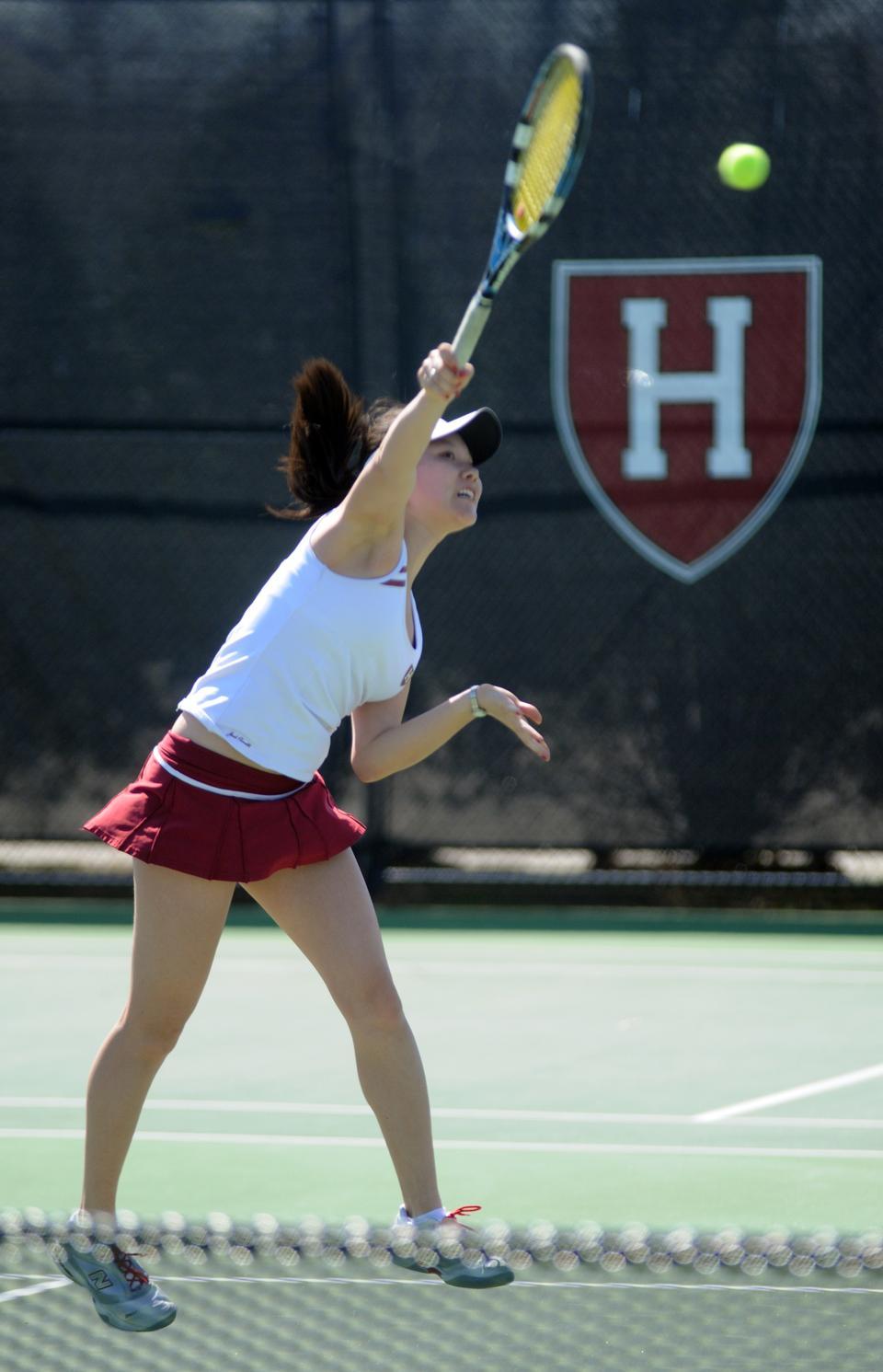 Sophomore Hideko Tachibana teamed up with classmate Kristin Norton and fell at No. 1 doubles to Penn Saturday, but she regrouped to capture a win in straight sets at No. 2 singles, propelling her team to a 6-1 triumph. By Audrey I Anderson
By Cameron Dowd, Contributing Writer

“Penn is a team that you need to take seriously,” junior Sam Gridley said. “They are not one of the top teams in the Ivy League, but they have a number of really good players, so it’s important to not take them lightly.”

The team took two of the three doubles matches to give Harvard a 1-0 team lead.

The Crimson was unable to match its strong start when its focus moved to singles play.

Cao and sophomore Kristin Norton each fell behind in the first set of their matches, 3-0, while sophomore Hideko Tachibana also found herself down, 3-1.

Norton rallied to pull out the set, 6-4, by winning six out the next seven games against Penn senior Alexa Ely.

“In the first three games, I was going for too much and going for the lines, and I ended up missing a lot,” Norton said. “[Ely] was coming out strong, and then I just planned to keep the ball in and be consistent cross-court, and then she started missing, and I was able to penetrate and come in. I think I played better towards the end [of the first set].”

She kept the streak going into her second set by jumping out to a 5-0 lead.

Norton had some difficulties finishing off her opponent, dropping the next two games before closing out the match, 6-2.

“I though Kristin had an outstanding day today,” Harvard coach Traci Green said. “I felt like she was in total control in her match, and I think it was a great way for her to build for the rest of the Ivy season.”

Tachibana came back in the first set to win, 7-5, then proceeded to take the second set, 6-2, which ended up clinching the victory for the Crimson.

Blosser took home another point for Harvard by winning her match, 6-4, 6-4.

Gridley got off to a great start in her match. She dominated the first set, winning the sixth game without losing a single point. Gridley smashed a short reply by her opponent to clinch the bagel.

“One of our coaches, Debbie [Goldfine] was on my court,” Gridley said. “She was telling me to have really big targets, be willing to hit as many balls it takes to win every point, and not give away any free points.”

In the second set Gridley had more difficulty, as her opponent freshman Lauren Bridges started being more assertive.

“[Bridges] was being more aggressive in the second set stepping up,” Gridley said. “I tend to hit many high balls, and she was stepping up and taking them on the rise more, and was hitting them flatter. I think that I was also getting more impatient in the second set, trying to finish off points too early and trying to hit flat winners when I wasn’t in position to do so.”

With the set tied at four, Gridley decided to go back to her original game plan before closing out the set, 6-4.

“When it got to 4-all, I just tried to go back to my game plan in the first set and be really consistent,” Gridley said. “Hit the big targets, mix up high balls and low slices to try to force an error out of [Bridges] ... that helped me play more patiently the last two games and close out the set.”

“I think we came out trying to treat this match like any other Ivy match,” Gridley said. “They are all important.”