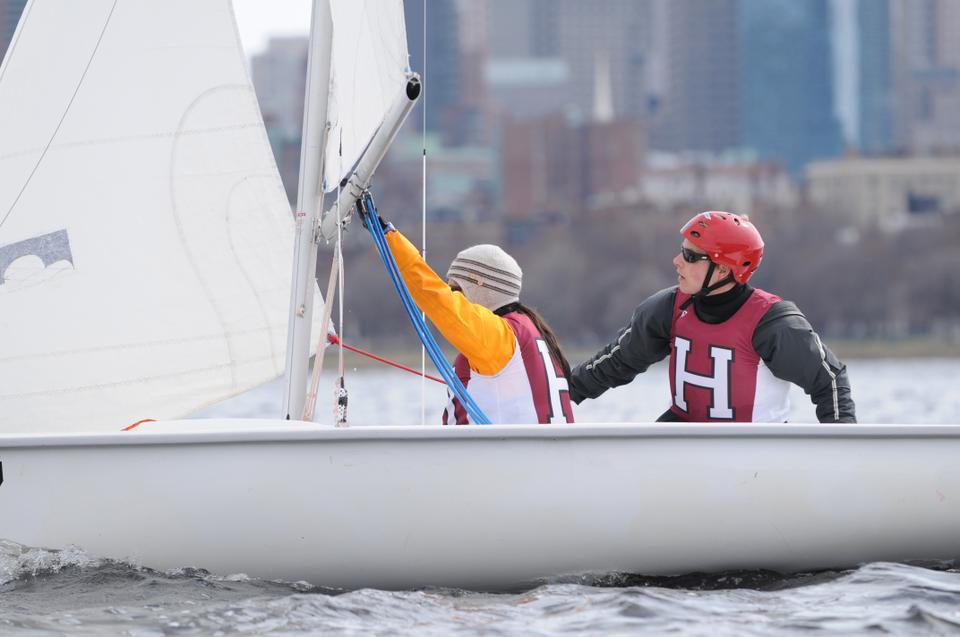 The Harvard co-ed sailing team settled for a close third-place finish this weekend at the MIT Regatta, falling behind the College of Charleston and Boston College in a series of closely-contested races.
By Darren McLeod, Contributing Writer

Following strong showings over the past two weekends, the Harvard sailing team looked to build upon its success this weekend in the 29th Marchiando and 51st Friis Trophies Team Race at Tufts and MIT, and the Central Series Four at home.

Though the team started off poorly in the opening rounds on Saturday at Tufts, the Crimson was able to turn it around quickly enough to force its way into the next round of races on Sunday at MIT. The squad even had a shot at winning the gold before being edged out of the final round by Boston College, ending the weekend in third place.

This weekend was full of crosstown and Ancient Eight rivalry, as Harvard faced Boston University, MIT, Northeastern, Yale, Brown, and Dartmouth in the Marchiando.

“College sailing is really good around the Boston area,” senior Alan Palmer said. “So we end up racing against a lot of good teams and sometimes people that we practice against.”

On Saturday, the Crimson struggled to gain all-important early victories in its full double-round robin, winning only one of its first five races due to an inability to adjust to the variable conditions.

“Sailing at Tufts is almost mystical in that it has both shifty winds and a shifty river,” Palmer said. “We definitely had an abysmal start, but we were able to turn it around in the afternoon.”

Harvard was able to make the much-needed adjustments, and won enough races to find a spot in the Sunday competitions with a few come-from-behind victories.

The conditions were much better for the Crimson on Sunday, as it returned to the Charles River with the familiar wind and water of a home course.

Though the College of Charleston was superior to all other teams, gaining a decisive 11-3 record in the round-robin, the Eagles and Harvard still had the opportunity to win.

As the rounds came to a close, so did the chance to race head-to-head against the Cougars, and all that stood between Harvard and an opportunity for a first-place finish was the team that edged it out last year for the 2010 Fleet Racing National Championship.

Boston College beat out Harvard in their race, pushing the Crimson into a third-place finish behind the Eagles and the College of Charlseton in the regatta.

“In general, we were pretty happy that we were able to take third place after that bad start,” Palmer said. “We had a shot at winning, but we just lost a couple class races.”

Harvard’s freshmen—along with sophomore Nick Gordon and junior Grant Wonders—also participated in the Central Series Four Conference regatta on Saturday and Sunday, hosting and competing against eleven other colleges from the Northeast.

The Crimson was fortunate not to face similar weather conditions as its upperclassmen counterparts had faced on Saturday, with only a slight breeze to disrupt the boats.

“We had beautiful conditions with it being warm and sunny, but on Saturday the wind was somewhat tricky,” freshman Ben Lamont said. “[The wind] was much better on Sunday though.”

The conference regatta was split into two divisions, with Harvard freshmen Ames Lyman, Luke O’Connor and Alice Kenney in the A-division, and Lamont, Grant Wonders, and Nicholas Gordon competing in the B-Division.

Each division competed in six races on Saturday and another six on Sunday.

The A-Division started off well with two top finishes on Saturday, but the Crimson fell to a sixth-place finish Sunday.

Despite garnering first- and second-place finishes on Sunday, the B-Division squad got off to a slow start and finished eighth overall.

Roger Williams University won the regatta, while the two Harvard teams combined to finish the weekend in sixth place.