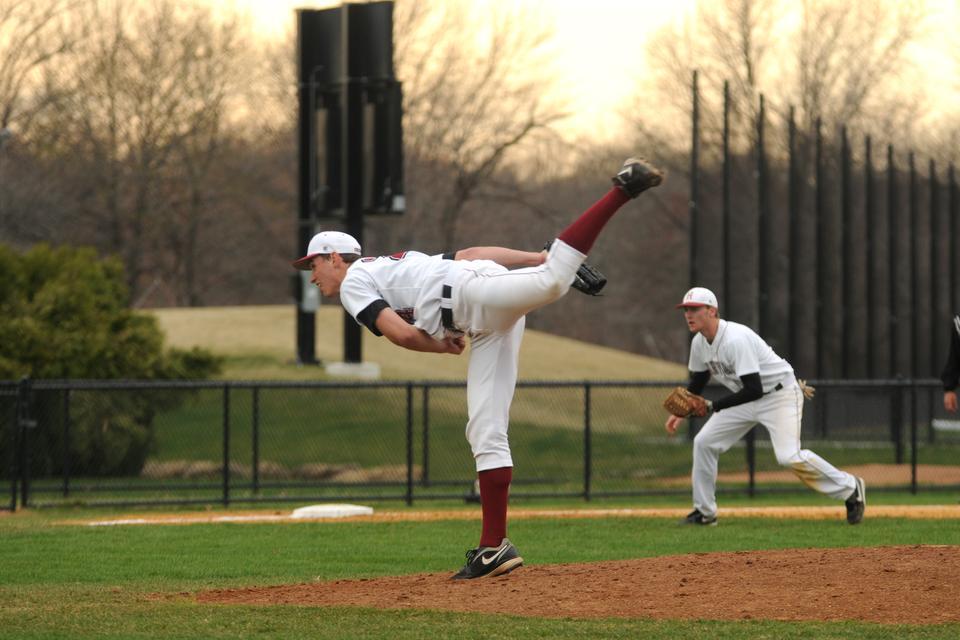 Despite taking the early lead, the Crimson fell again after its bullpen could not hold on in the final two innings. Still, junior southpaw Brent Suter, pictured above, pitched well in his 3.1 innings of work. Coming into the game in relief, he stuck out five while allowing just two hits.
By Darren McLeod, Contributing Writer

The Northeastern runner easily jogged home after a sacrifice fly in the ninth inning, putting the Huskies ahead for good in a heartbreaking 6-5 loss for the Harvard baseball team.

The cross-town rivalry matchup between Harvard and the Huskies was a back-and-forth battle that was highlighted with both small and long balls from each team.

After a weekend full of hits, the Crimson continued to hit the ball well, ending the game with nine. But it wasn’t able to capitalize on enough of Northeastern’s mistakes to take the win.

The Huskies jumped ahead from the start, as sophomore pitcher Danny Moskovits surrendured the first run of the game on an RBI-groundout to second.

But Harvard wouldn’t wait long to answer. After getting hit by a pitch in the second inning, senior catcher Tyler Albright came around to score following an RBI double from freshman third baseman Jake McGuiggan.

After a sacrifice advanced McGuiggan from second to third, freshman outfielder Jeff Hajdin laid down a perfect squeeze bunt that allowed the runner to score and gave the Crimson the lead, 2-1.

In the next inning, the Crimson was able to build the lead after a sacrifice fly from Albright. After yet another run off a single to center field from McGuiggan, Harvard moved to a 4-1 lead.

Both teams played small ball throughout the game, using sacrifice bunts, sacrifice flies, steals, and other strategic maneuvers to give them the edge.

“In such a close game, you have to get every run you can get,” McGuiggan said. “Especially today, they were making errors, so we were trying to put pressure on their defense by putting the ball on the ground.”

The Huskies would answer the Harvard’s offensive attack in the fourth with a leadoff home run and two more runs to follow to tie the game.

The Crimson and Northeastern were forced to go to their bullpens, and each used three different pitchers throughout the game, forcing one another to adjust to their rotations.

Harvard replaced Moskovits in the fourth with junior left-hander Brent Suter, who ended up dominating his batting opponents for 3.1 innings.

“I struggled on Sunday, so I just wanted to get back on the bump,” Suter said. “I wanted to pound the strike-zone and get back to my old self.”

Suter did just that, controlling the pace of the game with five strikeouts, and limiting the Huskies to no runs in his stint on the mound.

Smart base running by Hajdin broke the tie with the help of Northeastern’s error-riddled seventh inning performance.

Despite striking out, Hajdin reached first base after a throwing error by the catcher, who fumbled with the ball in the dirt. In Hajdin’s attempt to steal second, the catcher threw the ball away again, allowing the freshman to reach third.

The pitcher, continuing the string of errors, threw the ball away in a failed attempt at a pickoff, allowing Hajdin to come home.

In the eighth inning, Harvard turned to junior lefty Will Keuper to close out the game.

But the Crimson wouldn’t hold the lead for long, and Alan Pastyrnak drove in the game-tying run on a single to left-center.

Throughout the game, including the crucial bottom of the eighth, Harvard left a few men on who could have proven to be the difference in the ball game.

“We’re getting hits in spots with one or two here or there,” McGuiggan said. “We need to have more complete innings with hits [and] walks, and continue to move runners to plate more runs.”

Although Northeastern would take the lead and ultimately the game with a sacrifice fly in the ninth, its numerous errors could have cost it the victory.

“They had five errors and we had none in the field,” McGuiggan said. “So it’s always hard to swallow that type of loss.”