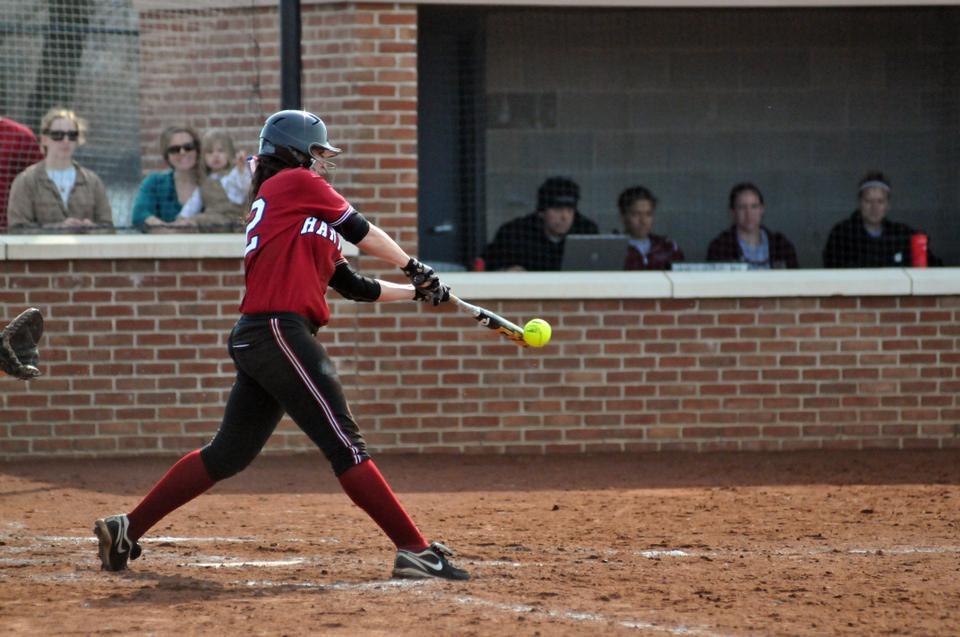 Freshman third baseman Kasey Lange, already named the Ivy League Rookie of the Week, led the Crimson with a mammoth offensive day at the plate. Her three home runs and nine RBI led the team.
By Alexander Koenig, Contributing Writer

“It was definitely chilly out there today,” Lange said. “I’m from California, so I’m still adjusting to this New England weather. Everything worked out for me today though.”

With the two victories, Harvard has now won 10 of its last 12.

The Crusaders opened game two with a pair of runs in the first and the third. But five-run bursts from the Crimson in the bottom of the fourth and the sixth innings gave the team a dominant nine-run lead. Umpires called the game at the end of the sixth on account of the mercy rule.

Harvard’s comeback was sparked by a two-run homer from Lange in the third, cutting Holy Cross’ lead down to one.

Lange struck again in the sixth, knocking in the seventh homer of the season and third of the day. She finished the game with six RBI.

Co-captain and second baseman Ellen Macadam went 2-for-2 with a pair of RBI and a steal to further catalyze the comeback-turned-mercy-rule victory. Macadam  currently leads the team with a .416 batting average on the year.

“We knew we were better than them, and we knew we could hit their pitchers,” Macadam said. “We stayed calm in the dugout, played tough defense, and kept firing at the plate.”

Two key coaching decisions facilitated Harvard’s 13-run spree. Junior pitcher Mari Zumbro relieved struggling starter and classmate Julia Moore after the Crimson fell behind by four in the top of the third. Zumbro then proceeded to pitch shut-out ball for the rest of the game for her first win of the season.

In the bottom of the fourth, sophomore catcher Olivia Piccione pinch-hit for freshman outfielder Jackie Cooley and drove in the go-ahead run on a two-RBI double to put Harvard up, 5-4. This sparked a five-run inning, and Holy Cross never caught up.

Junior shortstop Jane Alexander added two RBI of her own, both off of stand-up doubles. Harvard only left four runners on base in the game, something it had been struggling with earlier in the season.

Lange demonstrated her power early, going yard on an 0-2 pitch in the bottom of the first to get the Crimson started. The team never looked back on the way to a dominant 8-1 victory in the first game of the afternoon.

Harvard scored three runs—all with two outs—in the opening frame and added three more in the bottom of the fifth to all but seal the win. Junior pitcher Rachel Brown pitched six innings of one-run ball and tallied eight strikeouts.

“We’re starting to be aggressive,” Macadam said. “[We’re] just trying to have an offensive mentality and really run people into the ground.”

Lange added two more RBI in the second and fourth innings, finishing 3-for-4 for the game. Last week, Lange was named Ivy Rookie of the Week after driving in nine runs in six games. She currently has 39 RBI on the year.

“We just attacked their pitchers,” Macadam said. “[Coach Jenny Allard] has been preaching it, and it’s showing on the field.”

Sophomore outfielder Ashley Heritage and Zumbro each added RBI of their own, and three throwing errors by Holy Cross led to three unearned runs.

The Crimson’s offensive effort gave Brown all of the support she needed. With the victory, the junior improved her record to a commanding 14-5, with 210 strikeouts and a 1.87 ERA.

“It’s great to come away with a pair of wins,” Lange said. “This coming weekend is going to be huge as far as the conference goes, and gaining some confidence with victories like these can only be a good thing.”