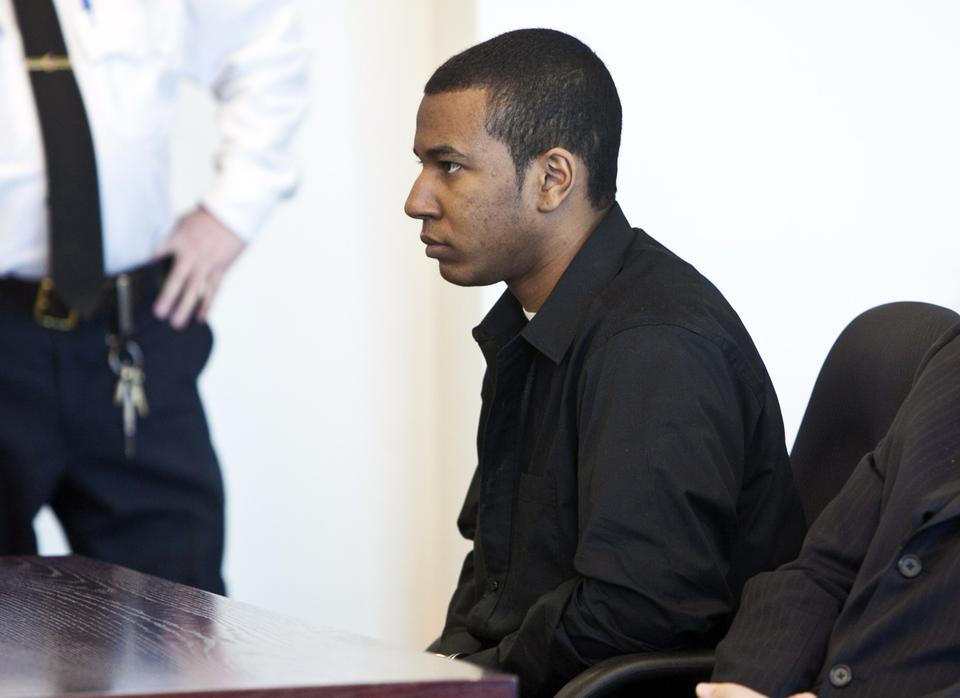 Shorty after being convicted of the murder of Justin Cosby, Jabrai Jordan Copney listens as the victim’s mother reads a statement. Denise Cosby spoke of the pain of losing her 21-year-old son and asked Copney why he committed the crime.
By Julie M. Zauzmer, Crimson Staff Writer

WOBURN, Mass.—Jabrai Jordan Copney has been found guilty of murdering Justin Cosby in the basement of Kirkland House in 2009 and has been sentenced to life in prison without the possibility of parole.

On its third day of deliberations at the end of a three-week trial, the jury announced a conviction on a charge of first-degree murder Friday for Copney, 22.

The jury also found Copney guilty of possession of a firearm but not guilty of armed robbery.

“They took their time and they came to the right decision based on the evidence,” said Assistant District Attorney Daniel J. Bennett ’85, the senior prosecutor in the case.

Prosecutors said during the trial that Copney, along with Jason Aquino and Blayn Jiggetts—both of whom made plea agreements and have been promised prison sentences of 18 to 20 years and 9 to 12 years, respectively—lured Cosby into the basement of Kirkland’s J-entryway with the intent of stealing marijuana from him at gunpoint. Copney shot Cosby, prosecutors said, when the Cambridge resident refused to hand over the drugs to his assailants.

Denise Cosby, the mother of the 21-year-old murder victim, spoke passionately during the sentencing hearing following the verdict.

“Each day I get up, I ache with loneliness and sadness for the loss of my son,” she said.

“Jabrai, I pray that every day when you wake up, Justin will be on your mind. I hope that he will constantly remind you of your evil deeds and why you are spending the rest of your life behind bars,” he said.

Defense attorney John A. Amabile said that his client was “obviously deeply disappointed with the verdict and the fact that he’s now been sentenced to life in prison.”

However, Amabile said that Copney “took it like a man.”

Copney's mother wailed “No” when the murder verdict was announced and sobbed audibly throughout the brief court proceedings until the break before the sentencing.

The jury foreperson said that the jurors had found Copney guilty of felony murder, rather than deliberate premeditated murder. This interpretation applies to a killing which occurred during the commission or intended commission of a felony which is itself punishable by up to life in prison.

However, the jury chose not to convict Copney of the armed robbery itself. Bennett attributed this to Amabile’s success in convincing the jury that Copney and his associates may not have succeeded in taking any marijuana from Cosby.

“I think that attorney Amabile did a fantastic job as a defense attorney,” Bennett said. “He cast some doubt on whether that marijuana was picked up.”

Lu noted before the verdict was read that for a first-degree murder conviction, the defendant is entitled to "a full and automatic appeal to the Supreme Judicial Court. This is not the last word, what happens here today."

In addition to the upcoming appeal in Copney’s case and the pending sentencing hearings for Aquino and Jiggetts, former Harvard student Brittany J. Smith may still stand trial for her involvement in the killing.

Smith, Copney’s girlfriend who allegedly hid the gun after the crime and helped the killers flee to New York, has been charged with accessory after the fact of murder and five other counts.