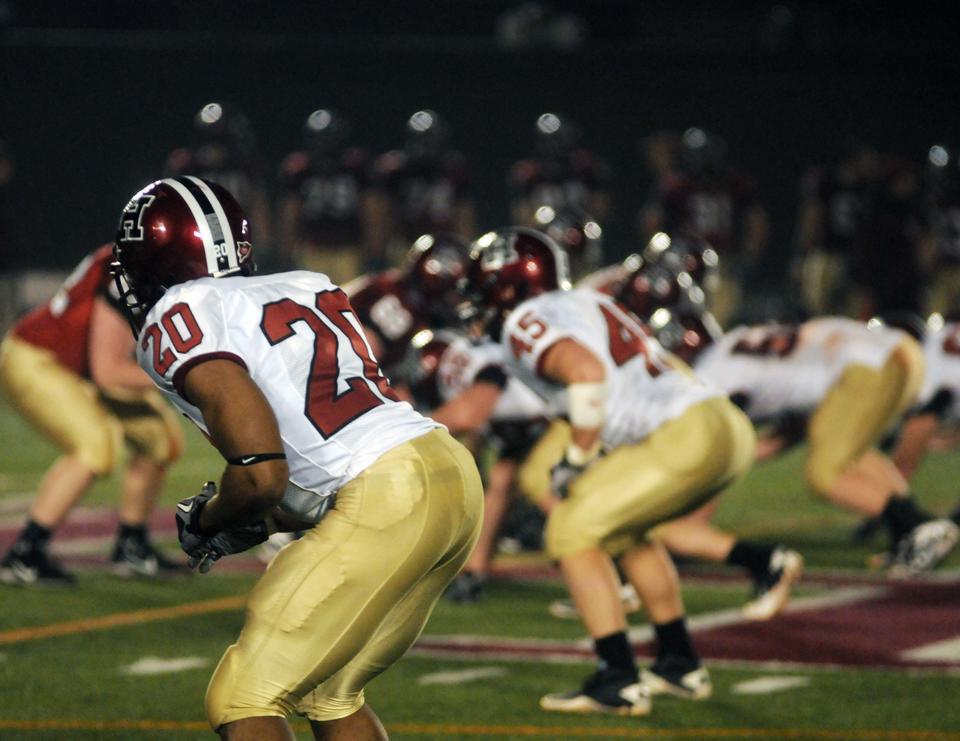 A blocked punt in the first quarter of a Saturday-night exhibition game at Harvard Stadium gave the White team an early lead while prompting onlookers to wonder whether one of the more unlikely scenarios in sports would come to fruition.

Would Harvard’s defense actually manage to outscore its own offense?

But the Crimson, the team representing Harvard’s offensive unit, responded quickly to even up the scoreboard and later scored once more to give it a 14-7 win over the White team, Harvard’s defensive unit.

The White team set the tone early by keeping the Crimson from earning a first down in the opening possession and forcing the offense to punt, at which point freshman linebacker Connor Loftus blocked the punt attempt and returned the ball the three-yard distance to the goal line.

“I think it was a missed assignment,” said junior defensive back Daniel Minamide. “We have a really good special teams coach. He knows what he’s doing. We’ll get everything straightened out.”

The extra point attempt was good to give the White team a 7-0 lead.

“We like to see the defense get some points on the board,” added rising captain and linebacker Alex Gedeon.

But the offense was soon able to counter. Sophomore Colton Chapple had struggled to find his rhythm in his first set of downs under center, but the quarterback was much more effective when he got the ball after the White team’s opening touchdown. Chapple and classmate Rich Zajeski, a running back, teamed up to move the chains.

The Crimson got on the board when Chapple found junior wide receiver Adam Chrissis streaking down the right side of the field.

“I think Colton did a great job,” Gedeon said. “Last year, he kind of got thrown in there. He’s a really dependable guy.”

In a game that pitted upcoming Harvard athletes against each other, it was fitting that it was another young athlete, rising sophomore Thomas Schadewald, who scored the winning touchdown. Schadewald’s rush through the center gave the offense a second-quarter lead it would never relinquish.

With many players either injured or taking semesters off before competing as fifth-year seniors, the game was largely a contest among freshmen and sophomores.

“I’m happy that they got the opportunity to play and learn from that experience,” Minamide said.

Minamide was one of the few upperclassmen to participate.

But Minamide was just as impressed with the performance of his younger teammates.

“At least from a defensive secondary point of view, the young guys are doing a great job,” he said. “I’m definitely proud of how hard they work...We saw a lot of guys step up.”

Minamide noted that rookie corner Jaren Wilson has stood out this spring.

“He’s had to step up in just a huge way,” Minamide said. “He’s a really confident player. He’s still learning all the different parts, but he is doing a great job, and he is going to be a great player some day.”

Meanwhile, Minamide said that freshmen Rey Kirton had emerged as a leader from the safety position, and noted that Loftus and rookie linebacker Danny Frate have also stepped up.

The offensive unit was similarly filled with young athletes—with returning-starter Chrissis one of the few exceptions—but at least two of the faces, sophomore running back Rich Zajeski and Chapple, were familiar.

Zajeski emerged as Harvard’s third-string back last fall, while injuries prompted Chapple to start three straight games, all of which were wins.

With rising fifth-year senior Collier Winters gone for the semester, Chapple has been taking all of the snaps with the first-team offense all spring.

“He’s been doing a really good job,” Minamide said. “People are starting to follow him and view him as a leader.”

Also taking snaps on Saturday were freshmen Michael Pruneau and Cory Briggs, who combined for five completions. Pruneau impressed on one play where he faked a handoff to freshman Damani Wilson before sprinting for a first down.

“Mike’s a really good athlete,” Gedeon said. “That’s going to be an asset: his ability to get out of the pocket and extend plays with his feet.”