Navy No Match for Lightweights, Heavies 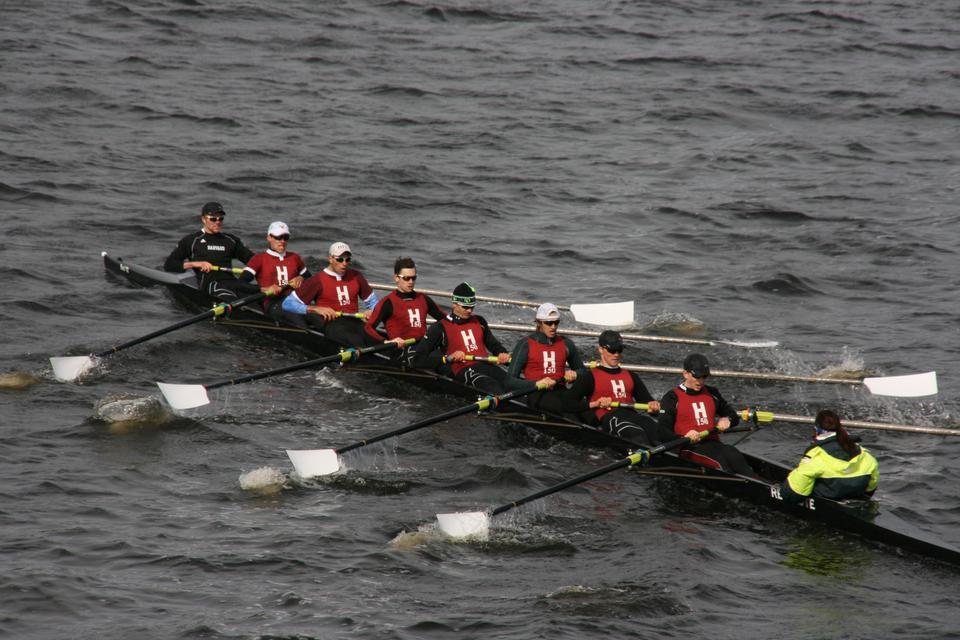 Shown here in earlier action, the No. 2 Harvard lightweight crew held its own against Navy on the Charles this weekend, as the Crimson’s first varsity eight took home the Haines Cup for the third year running. The No. 3 heavyweight crew won each of its five races as well. By Leila L Pirbay
By Christina C. Mcclintock, Crimson Staff Writer

The United States may have the strongest military in the world, but it had better hope that its next war doesn’t come down to an eights race. Or at least, not one against Harvard.

But true to form, the Midshipmen made Harvard fight for victories in several races and stole two from the Crimson lightweights.

“They’re just pretty tough, aggressive guys,” said junior Mike DiSanto, seven seat of the heavyweight first varsity eight. “Those guys are great competitors. They go out, and they go hard every single time we race them.”

Races can be won at any stage, so Harvard’s first varsity eight refused to wait, using a strong starting sequence to propel it to a narrow victory.

“We had a great start, which positioned us very well for the rest of the race,” said senior two-seat Jared Dourdeville. “Whenever Navy took a move, and they took a couple of very strong ones, we were able to counter.”

The Crimson finished in a time of 5:53.0, which was 1.2 seconds ahead of the Midshipmen’s 5:54.2. The margin was just enough to give Harvard the Haines Cup for the third year in a row.

“In the 2V race, from what I heard, they had a good start as well,” Dourdeville said. “Navy took a strong move at the 1000 and took a couple seats back. The 2V was able to hold them off.”

The Crimson cruised to a 2.8 second win in the 2V race.

A hotly contested race turned into an easy victory for Harvard in the freshman eight event.

The Midshipmen had taken an early lead, but the Crimson’s 1F was able to regain control of the race and take a three-seat lead when one of Navy’s rowers caught a crab.

But Harvard’s race still showcased the improvements the boat has made over the course of the season. The 1F began its season on a losing note but has since rallied to earn wins over strong teams such as Dartmouth and now the Midshipmen.

The Crimson’s two losses came in the third varsity eight race and the second freshman race.

Navy took the 3V race by 10 seconds and the 2F race by 5.6 seconds. It was the first time Harvard’s 3V had lost all season.

A powerful start by Navy in the first varsity eight race threatened the end of Harvard’s boat-club-wide undefeated streak, but the Crimson’s third 500 put to rest any worry that the Midshipmen would blemish Harvard’s record.

Because the Schuylkill course has a turn in it, starts are staggered, and Navy started slightly back of the Crimson. But the Midshipmen quickly made up the distance to take a commanding early lead.

“They had seven seats up on us at one point,” DiSanto said.

But Harvard was unfazed by Navy’s lead.

“We kind of knew they were going to go out hard,” DiSanto said. “I think that was kind of their plan. I don’t think anyone in our boat was too nervous. We haven’t had [to come from that far behind] before. It was good to be put in that situation and come back. It was just the nine of us keeping faith in each other and having composure.”

The Crimson moved through the Midshipmen in the third 500 and ultimately won the race by 3.6 seconds to claim the Adams Cup for the 12th straight time.

The Quakers were third in each event save for the 4V race in which they did not compete.

The Crimson has yet to lose a race in any event—including a race in which the 4V raced Princeton’s 3V and the 4V’s wins over several programs’ 1Vs in the team’s first weekend of competition.

“It’s a pretty amazing thing,” DiSanto said. “It’s just something that’s happened. We’re trying to keep it going for as long as possible. It’s really a testament to our coaching.”