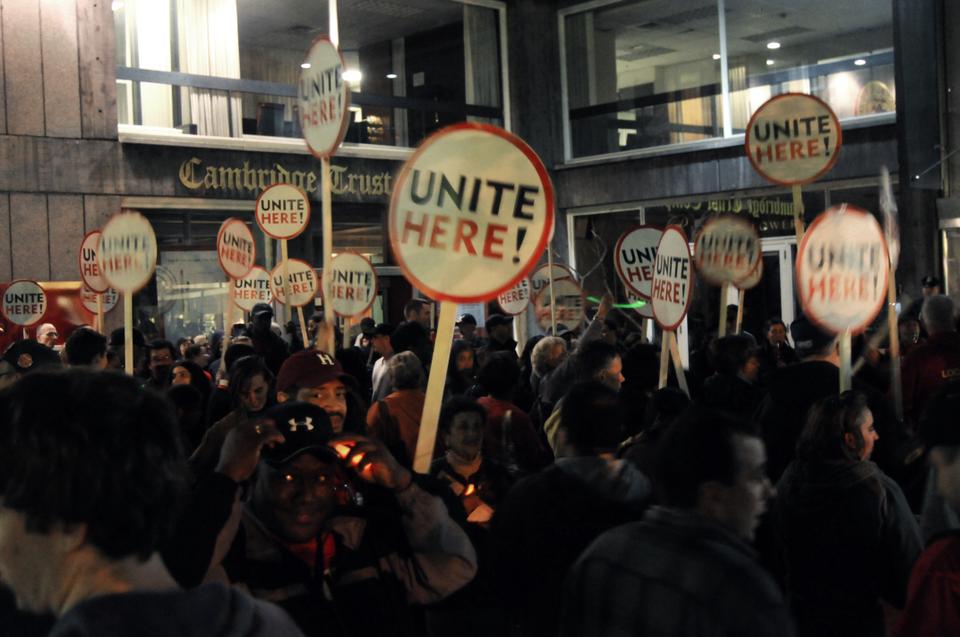 Yale University dining hall workers and students join their Harvard counterparts for a union demonstration in Harvard Square on Thursday night. The protest followed a meeting and discussion and a negotiation session between Unite Here Local 26 and the University.
By Mercer R. Cook, Crimson Staff Writer

The march ended in the area outside of the Holyoke Center where the crowd sung a version of “The Battle Hymn of the Republic” with lyrics adapted for the union.

As the marchers traveled through the yard swinging colorful glow sticks, accompanied by a union-led band, they picked up a number of spectators and drew some students to watch from the sidelines.

Union leadership offered few details about the nature of the negotiations and the University declined to comment late Thursday night.

Members of the Yale dining hall workers’ chapter of Unite HERE also met with University officials in that meeting.

Following that meeting, the union members met with student supporters in First Parish Church before kicking off the rally.

At the church, the two school’s unions discussed the differences in their contracts.

Harvard and Yale workers said they want many of the elements contained in the Yale workers’ contracts to be included in the newest contract for the Harvard dining hall workers, including full-time employment, more job training opportunities for workers, and increased job security.

“In New Haven, we have a source of inspiration,” said Unite HERE Local 26 president Brian Lang, who called five Yale workers up to the stage.

The Yale workers proceeded to discuss the struggle they endured before obtaining their current contract, including 11 strikes. The speakers said their struggle was ultimately worth the pay-off.

“We stand here today with full-time employment. We stand here with no lay-off language—period. We stand here with 100 percent free medical,” said Robert “Bob” Proto, president of Unite HERE Local 35, which represents Yale dining hall workers. “There’s a standard of quality of jobs that Harvard needs to raise up to Yale’s.”

Harvard dining hall workers also spoke during the First Parish Church meeting, saying that they are fighting for a contract that benefits the entire University.

Childs then proceeded to grab the hands of a student and a worker and raised them high, a symbol that would be repeated throughout the night, and drew thunderous applause from the audience.

“Every time I’ve been in a dining hall, workers have had my back,” Ebrahim said. “Now, it’s our turn.”

SLAM member Naimonu A. James ’14 received a standing ovation from the energized attendees when she expressed SLAM’s dedication to the workers’ cause. With over 50 students standing behind her, James said, “No matter what this takes or how long it takes, we’re going to get this done, and we’re going to get each other through it.”