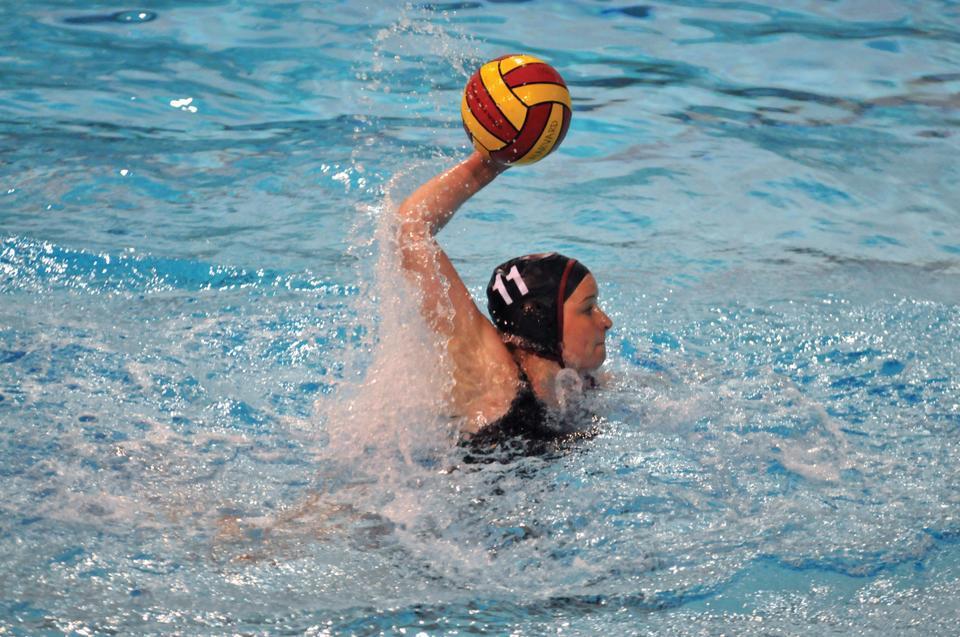 Junior Monica Zdrojewski, shown above in earlier play, had a productive weekend on the offensive end, scoring 10 goals in the Crimson’s first three matches. The junior cooled down in the final game against Princeton, but her teammates contributed to the scoring, with rookie Shayna Price leading the way. By EMILY A. PEREIRA
By Cameron Dowd, Crimson Staff Writer

The Harvard women’s water polo team’s strong performance this weekend earned them a sixth-place finish in the Collegiate Water Polo Association Eastern Championship at the Indiana University Counsilman-Billingsley Aquatic Center. It was the Crimson’s (17-15, 3-2 CWPA) highest finish in the tournament since 2005.

Harvard went 2-2 in the championships winning against Bucknell and Gannon while losing to No. 20 Princeton and dropping a close one-goal loss to the eventual tournament champion, No. 13 Indiana.

“Indiana just won the championship game, and we only lost to them by one point,” freshman Shayna Price said. “It really shows we are right there with these teams, and we can come back next year just as strong.”

In its final game of the season, the Crimson took on No. 20 Princeton with a fifth-place finish in the CWPA Championships on the line.

Harvard started the second half strong with goals by sophomores Elise Molnar and Aisha Price. Sister Shayna Price evened the score with a penalty-shot score, her second free-penalty shot and score of the day.

“I had an opportunity to two penalty shots,” Shayna Price said. “So those weren’t really [just] my goals—someone pulled off a great foul, and I was able to finish for them.”

The run forced Princeton to call a timeout to regroup.

The respite served the Tigers well, as the team responded with two quick scores which proved too much for Harvard to overcome.

Despite the loss, the team finished its season playing well and only losing to ranked teams.

“We were very happy with our outcome of the weekend,” Shayna Price said. “We had some very close games, and I think overall we played our hearts out. We are proud of what we did this season.”

Both teams came out firing at the start, with each side scoring two goals in the first four minutes of play.

Harvard pushed the lead to 4-2 with back-to-back goals by Shayna Price and junior Lizzie Abbott.

Bucknell came back to tie the game at five in the third period. But the Crimson responded with three consecutive scores to build a late 8-5 lead.

Kennifer had three goals and was named Player of the Game by the CWPA.

The lead proved to be too much for the Bison to overcome.

“I was a little concerned about a letup emotionally and physically; after playing such a tough game the night before,” Minnis said. “Bucknell has done a great job this year of continually getting better. We talked about taking that first half, playing well, keeping the game close, and taking advantage of that third quarter push. We did [all] that.”

“[Indiana] is the No. 13 team in the country and [won] the championship,” Minnis said. “We were really focused on them, and we did a really good job. I’m so proud of the way the girls played. They played real hard; they played some good quarters.”

Indiana had the home-field advantage and fed off the crowd’s energy on its Senior Night, as the team jumped out to take a 4-3 halftime lead.

After the half, Indiana extended the lead by outscoring Harvard, 3-1, in the third quarter.

The Crimson rallied in the fourth with two goals in the last six minutes.

Harvard got two shots on goal to try to tie the game, but Hoosiers goalie Cassie Wyckoff came up with the saves to preserve the lead and ensure the Indiana win.

“We talked about [how it was Indiana’s] Senior Night, and we talked about how it was going to be a very electric building for them,” Minnis said. “They were really going to play off of that for the first half. [The goal] for us [was] to keep it close and make the push in the third and fourth quarter, and we did that. We gave ourselves an opportunity to tie it at the end, [but] it just didn’t float in for us.”

The Crimson started the weekend with a dominant performance against the Golden Knights (9-19, 0-5).

“We played good defense,” Minnis said. “I think we settled down and played well...It was a good game to start the tournament with, to get the jitters out, and to get ready for a tough game [against Indiana].

Harvard was led by the strong play of Zdrojewski and Purcell, who had five and four goals respectively.

All five of Zdrojewski’s scores came in the first half, giving the Crimson an insurmountable 12-2 halftime advantage.

“[Zdrojewski and Purcell] did a good job of getting themselves into a position where they could shoot and score,” Minnis said. “[Zdrojewski] has done that all year; she has over 60 goals this year, second on the team in scoring. Shannon is leading the team in assists, so it’s nice to see her take a few goals.”

—Staff writer Cameron Dowd can be reached at camerondowd14@college.harvard.edu.