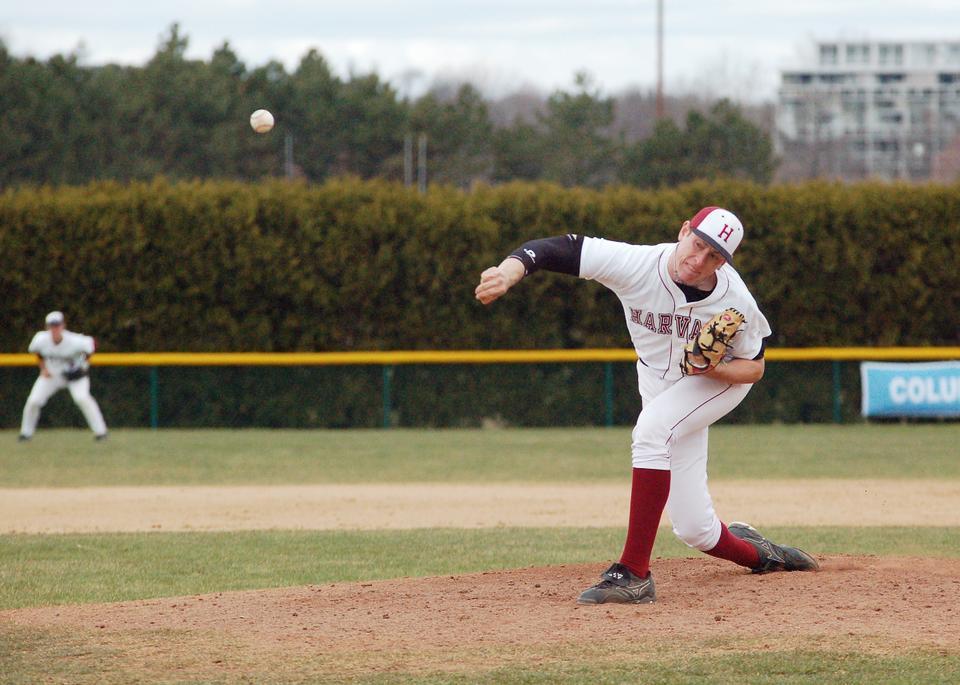 In 2007, Max Perlman was a hotshot rookie pitcher for the Harvard baseball team. The Florida native was named a freshman All-American and garnered second-team All-Ivy status while leading the Crimson in wins, ERA, and complete games. He picked up a victory in his collegiate debut against Notre Dame and wowed the college baseball world by throwing 20 consecutive strikes in a complete-game three-hitter against Yale a month later.

Unsurprisingly, people expected big things from Perlman during his sophomore season. But before school had even begun, the starter was asked by the College to take a year’s leave of absence for disciplinary reasons, during which time he had surgery to fix bone spurs in his pitching elbow.

In 2009, after throwing 55 innings in the Cape Cod League over the summer, Perlman returned to Harvard with his repaired elbow well-tested. He was ready to retake his spot atop the Crimson’s rotation as the team’s ace.

But in Perlman’s first start of the year, an early March contest against Jacksonville State, the sophomore had to leave in the fourth inning with an elbow injury.

From his doctor, he then heard the two words that any pitcher most dreads—not home run or wild pitch, but Tommy John.

The infamous elbow surgery kept Perlman out the rest of his sophomore year, and most of his junior year as well.

“With the diagnosis, I knew it would be a 12-to-18 month recovery [after surgery],” Perlman said. “The process of rehabbing was slow, so I just had to be patient and put the work in.”

He finally returned at the end of the 2010 season, throwing just 15 innings in five starts and finishing with a 9.60 ERA. But coming into 2011, Perlman was finally completely healthy and ready to make the best of his senior year.

During the summer, Perlman again pitched in the Cape Cod League and was named to the league’s All-Star Game at Fenway Park. Playing for the West team, Perlman threw a scoreless inning in the contest, and at the end of the summer—after finishing with a 1.92 ERA— he was named to the all-league squad.

As the spring of 2011 approached, he was again set to build on the success he had experienced as a freshman. No more distractions, no more injuries. Just a mound and a ball.

And this time, Perlman excelled.

The starter was one of the lone bright spots on a Harvard team that finished 9-36. An All-Ivy first-team selection, Perlman threw 60 innings and led the Ancient Eight with a miniscule 1.80 ERA—the only qualifying pitcher in the conference with an ERA under 2.00. He also had more strikeouts (55) than hits allowed (46).

“I had very high expectations going into [the season],” Perlman said. “This was especially true at the beginning of the year when we played Friday-Saturday-Sunday series instead of two-day series [near the end of the year]. Pitching Friday night games, I knew I was going up against the other team’s best pitcher and was going to have to step up and keep the team in the game. That really motivated me to push through.”

Perlman said he realized he was truly back during an early-season start against Charlotte, when he was locked in a 0-0 contest in the seventh inning. Though the Crimson lost that game, 2-0, Perlman was on the winning side of pitchers duels at other times as well.

Just as he did in his first-ever start against Yale, the starter dominated in his final performance against the Bulldogs, bringing his Harvard career full circle with a complete-game, 10-strikeout, four-hit shutout in a 1-0 Crimson victory.

“Coming into this year, we all knew he [would have a big impact],” freshman outfielder Jack Colton said. “He obviously tore up the Cape League in the summer…and shut down everyone this season. People just couldn’t hit the ball off of him.”

The senior had finally met the high expectations everyone had set for him after his outstanding rookie season. For Perlman, the success was better late than never.

“My doctor kept telling me that if I put the work in, it would pay off, and I could come back even stronger than before,” Perlman said. “I was very happy and fortunate that he was able to perform the surgery so well and give me a chance to come out again this year.”

It may have taken four years to get there, but Max Perlman was finally back on top.