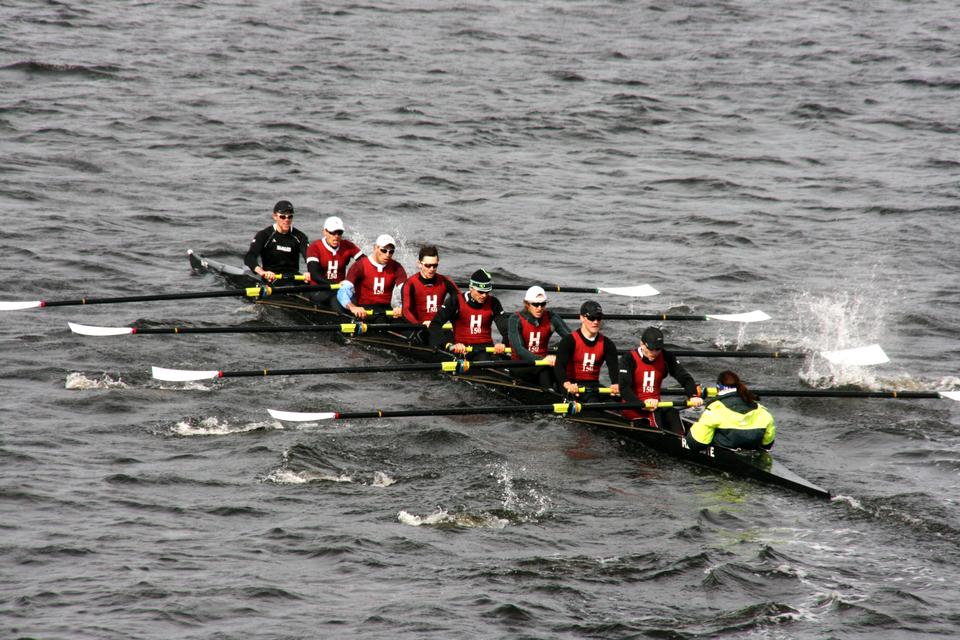 The Harvard lightweight first varsity eight, shown here in earlier action, defeated Princeton on the Charles this weekend in a battle of top-ranked crews. With the victory, the Crimson moves into first place.
By Christina C. Mcclintock, Crimson Staff Writer

The athlete of the week distinction is meant to honor a single weekend’s performance, usually by a single athlete. But when the Harvard lightweight first varsity eight defeated No. 1 Princeton on the Charles this past weekend, it was the product of a season of dedication by an entire team, not just the nine athletes who raced in that eight on Saturday.

“I think in terms of how our entire program has developed, this is a product of a really solid group of athletes across every class,” said junior seven seat Austin Meyer. “We’ve had an extremely competitive year within the squad, which has proven to be extremely useful when you race other teams.”

That competitiveness manifested itself in undefeated seasons for both the 1V and 2V.

“The 1V and the 2V definitely feed off each other,” Meyer said. “Going into HYPs, we didn’t want to make this the first loss.”

“The boat dynamics have been especially good this year in terms of how we mesh,” said senior two seat Jared Dourdeville. “That’s certainly the case for the 1V, and I think I can speak for the 2V and the 3V was well.”

But while it hadn’t lost, the No. 2 Crimson certainly had close calls. The weekend before it raced the Tigers and Yale, Harvard only defeated Navy, seeded sixth in the EARC, by 1.2 seconds.

Yet the Crimson 1V was able to find enough speed to defeat Princeton, seeded first in the most recent EARC poll, by nearly the same margin, and the Bulldogs, seeded third, by 4.2 seconds.

“We knew we were going to be that extra two percent faster,” said captain and six seat Will Newell. “When you race two teams that are that good, you’re going to have to be at the next level. All three teams showed that they were on that level.”

That tightness was especially apparent at the start of the race, when all three crews were in nearly perfect unison for most of the first 500. Harvard and the Tigers were able to take one-seat leads over Yale in the second 500, but at that point, it was still a three-crew race. Princeton took a move at around the 1000-meter mark that pushed it a deck ahead of the Crimson. But Harvard was able to halt the Tigers’ move by the time the crews passed through the Mass. Ave bridge, and soon took a move of its own.

The Crimson continued to move throughout that 500 to give itself almost a six-seat lead.

Lesser crews might have been broken by Harvard’s move, but Princeton, the defending national champion, made it a fight to the finish. The Tigers spiked the rate to a 39 in the final strokes and were able to move back into the Crimson’s hull, while Harvard spent much of its sprint at a 37.

But Princeton’s surge came too late, and the Crimson was able to hold on for a one second victory.

It was official: Harvard had gone undefeated in the dual season for the second-straight year.

Six of those rowers—Meyer, Newell, Moore, Trott, Dourdeville, and Nesel—rowed in last year’s 1V at some point during last season, but Newell says that despite the two boats’ similar personnel and success, the seasons have been very different.

“In terms of character, they’re very different,” Newell said. “I think everything is worlds different. The way we approach races: it’s been completely different.”

Harvard hopes the end result will be different too. Last year, the Crimson defeated the Tigers in the regular season only to fall to them at Sprints and later at IRAs, where Harvard earned bronze.

“The group hasn’t gotten caught up in the small details. We’ve always had the bigger picture in mind,” Meyer said. “It means nothing in the end if we don’t win. While it’s been a job well done so far, the mission has yet to be accomplished.”

With the way the whole squad has been pushing each other, the 1V won’t have a choice but to keep working.

“I’ve been very impressed with the focus and the motivation of the team,” Dourdeville said. “I think Saturday was a culmination of that.”