Part I in III Part Series 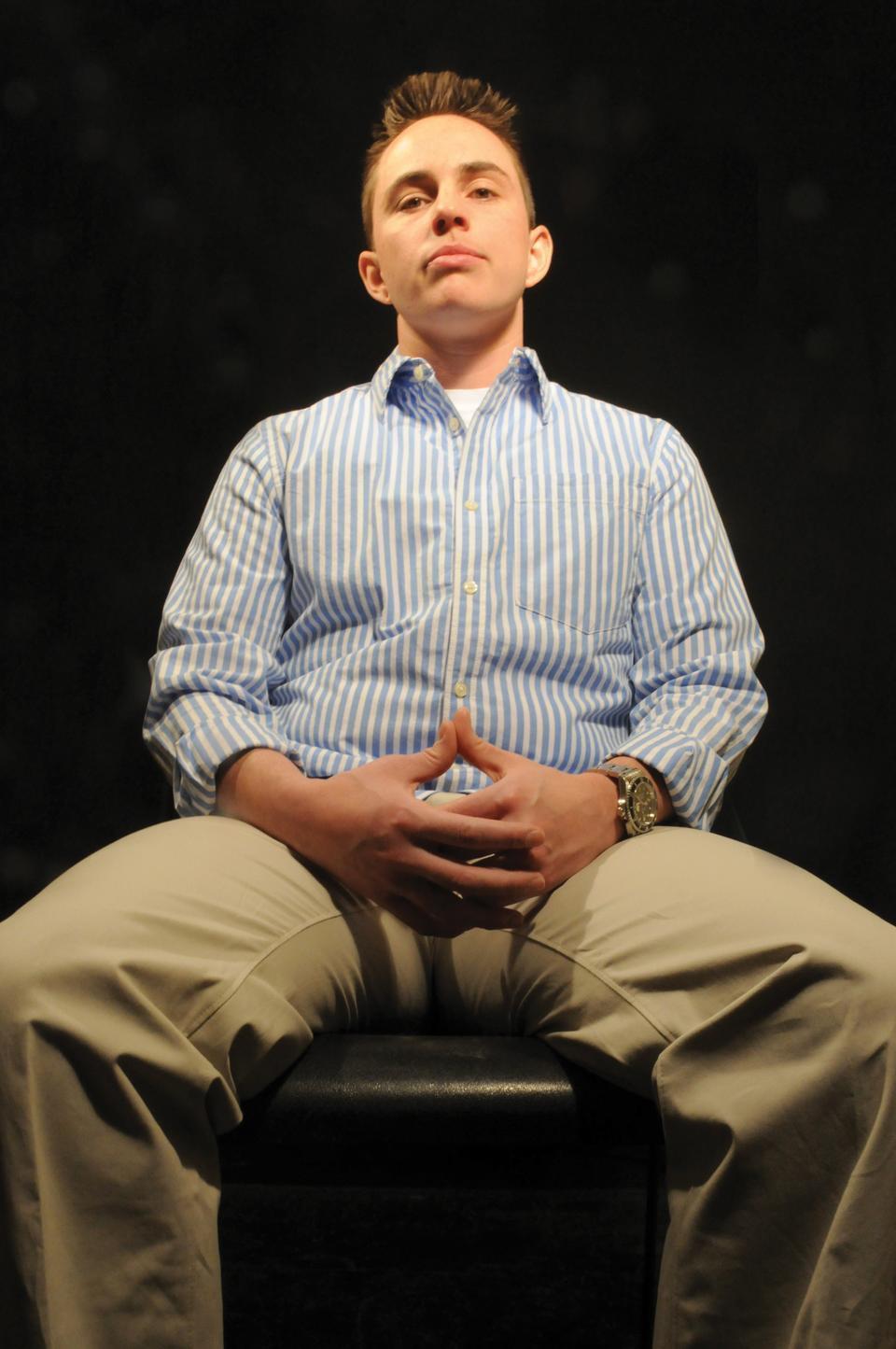 Jack K., a third year student at the Law School, cannot serve in the military despite the repeal of "Don't Ask, Don't Tell" because he is a trans man.
By Tara W. Merrigan, Crimson Staff Writer

One week each fall, members of the Judge Advocate General’s Corps visit Harvard Law School to recruit its next crop of military lawyers. For Jack, it’s one of the most difficult weeks of the year.

Despite his past military service, Jack is not eligible for JAG because he is a trans man. Since his honorable discharge in 2007, Jack, who insisted on his last name not being included in this story to prevent potential workplace discrimination, has undergone  sex-change surgery, having had top surgery to remove his breasts.

The military considers those with gender identity disorder, the medical diagnosis associated with transgender persons, and those who have physically transitioned unfit for service. Sidelined by military medical policy, he must watch while his peers compete for his career of choice.

LGBTQ-identified individuals have long been excluded from openly serving in the American military, but with the repeal of “Don’t Ask, Don’t Tell” last fall, gays, lesbians, and bisexuals are now permitted to serve without the risk of being discharged on the basis of their sexual orientation.

Despite this landmark advance in gay rights, transgender men and women like Jack are still ineligible for military service as their exclusion is based on the Department of Defense’s medical policy. Meanwhile at Harvard, the repeal of “Don’t Ask, Don’t Tell” has brought about the return of the Reserve Officers’ Training Corps, but the University has been largely deaf to arguments that while the military continues to prevent trans-identified men and women, the program’s presence on campus violates its non-discrimination policy.

Some defenders of the University’s decision say that allowing gays and lesbians to openly serve in the military represents a historic step forward that warrants Harvard’s recognition, justifying the exclusion of what is seen as a small minority. Jack is a member of that minority, and until military policy changes, his dreams of serving in the military are likely to remain deferred.

Jack was rushing toward the ground, the wind howling around him. Like many times before, he had just hurled himself from an airplane. But this time he was descending right above his fellow paratrooper’s parachute. The only thing between Jack and the ground rushing up at him was the parachute of the trooper below him.

“I was coming down on their parachute, which is not good because their parachute would be taking all the air from mine and I would have to pull my reserve,” Jack says. “But I had been trained what to do. We’re taught to run on and off the other person’s parachute to move away, so I ran on their chute.”

Jack, who trained as a medic and attended airborne school at Fort Benning in Georgia, says joining the military was a lifelong dream. After graduating from the University of Nebraska in 2006, Jack considered entering the job market or pursuing another degree, but chose to enlist in the Army.

“I got trained to jump out of airplanes. It was very fun.” Jack says, smiling to himself. His tone is regretful and nostalgic. Sitting in the student center at the Law School, Jack wears a blue pin-striped button down, jeans, and loafers. His short hair is spiked up in the front, pushing his bangs off his lightly freckled forehead. His eyes are soft and keen. His manner is easy. Since childhood, Jack has had a keen interest in the military.

“When I was growing up I was really into playing war games, playing soldier,” Jack says. “I remember being eight years old and checking out books from the library about the military.”

As a child, he was particularly fascinated by aviation.

“I had always wanted to fly helicopters,” Jack adds. “Plus, combat pilots were one of the few sort of combat-oriented jobs that were open to women.”

At this time, Jack had not yet transitioned and identified as a lesbian woman.

He served in the military until he was discharged in 2007 under the guidelines of the recently repealed “Don’t Ask, Don’t Tell.” He credits his honorable discharge to his good relationship with his captain.

“It was a false choice—serving in the military but hiding your sexuality,” Jack says, his frustration evident. “When you’re in the Army you’re taught core values—two of those are honesty and integrity. You can’t live that and lie about important parts of your life, such as who your partner is.”

As he closeted himself from his unit, Jack says he struggled with lying to his fellow soldiers. His lifelong dream of serving in the military clashed with feelings of guilt that stemmed from lying about his sexual orientation.

If Jack had not transitioned he would eligible to join the military today, but he says he does not regret his decision.

“At the time I transitioned, people were pretty pessimistic about the repeal of DADT,” he says. “But I don’t regret it now. There’s still room for the military to make changes and allow myself and other trans people to serve.”

Because the military prohibits those older than 42 from enlisting, the clock is ticking on Jack’s military career.

“My surgery was a matter of being comfortable in my body. The military just needs to hurry up and make this change—because I’m going to be 30 in a few years!”

After his discharge, Jack enrolled in law school at the University of San Diego but transferred to Harvard Law in 2009 after completing his first year.

Jack began his transition upon transferring to the Law School and has since received hormone treatment and top surgery.

Though Jack, who has medically transitioned but has not been diagnosed with gender identity disorder, says he would love to rejoin the military, the military still excludes him despite the repeal of “Don’t Ask, Don’t Tell” last November.

Jack says that this physical transition has in no way affected his ability to serve.

“Whether I have an Adam’s Apple or not doesn’t affect the way I serve,” Jack says. “I’d be just as good a soldier today as I was a few years ago.”

“If anything my transition has enhanced [my ability to serve]. I can do more push-ups and run faster,” he adds.

In the muddy rain-soaked patch of grass between Lamont and Loeb House, Jack stood with his black Labrador and 30 or so other trans rights activists to protest the ceremony honoring the University’s recognition of NROTC.

With each opening of the exterior door in a gilded room in Loeb House, their cries of “Put down your pen!” and “Drew Faust, it’s not too late! Harvard can’t discriminate” trickled in.

The room was filled with military brass who had assembled to watch University President Drew G. Faust sign an agreement that officially recognized the Naval Reserve Officers’ Training Corps, a historic break from the University’s previously tense relationship with the military.

The University’s unwillingness to recognize the program had been based on the objection that “Don’t Ask, Don’t Tell” had violated the University’s non-discrimination policy. Faust had pledged earlier that Harvard would recognize the program following the policy’s repeal, so when Congress moved to allow gays and lesbians to openly serve, Faust followed through on that promise and signed the agreement with the Navy.

“I feel this is an extremely important moment to recognize that “Don’t Ask, Don’t Tell” has been the hook for our distance from ROTC for two decades now and that the very important repeal of that law puts us in a situation where we want to respond with the appropriate enactment of what we’d said we’d do,” Faust said after signing the agreement.

But for the trans rights activists protesting outside Loeb House, because the military continues to exclude trans-identified men and women it still violates the University’s non-discrimination policy despite the repeal of “Don’t Ask, Don’t Tell.”

“It was such an exciting moment for Harvard,” Jack says. “But it was just so marginalizing to stand outside Loeb House. It was incredibly difficult as a vet to stand by the sidelines and watch service members in uniform and ROTC cadets take pride in that moment.”

“Being there on the sidelines, you realize that not only does this institution [the military] exclude you, but that this school that has a non-discrimination policy that’s supposed to protect you is too.”

University officials have said that the decision to recognize ROTC stemmed from the repeal of “Don’t Ask, Don’t Tell” and have put concerned activists in touch with the military to discuss the military’s medical policy.

“I know there are many students who feel that ‘Don’t Ask, Don’t Tell’s repeal doesn’t go far enough. My senior staff has met with them and I am listening to their concerns and I hope I can continue dialogue with them and enhance dialogue between them and people in the armed services,” Faust said to a group of reporters after the ceremony. “In fact, we have arranged for an individual in the Navy to receive comments from them and to interact with them and to talk to some of the members of the trans community in hopes of furthering that dialogue by continuing to address this issue.”

Jack, Queer Students and Allies Co-Chair Marco Chan ‘11, and Jia Hui Lee ’12, a student leader on the Trans Task Force, met with administrators from Faust’s office a few days prior to the ceremony. They say they felt brushed aside by the University and were alarmed by how quickly the University recognized ROTC after meeting with campus trans activists.

But several faculty members at the ceremony recognized the protesters’ concerns and said that they intend to work toward reconciling this issue.

“I view them sympathetically. This is a work in progress, but recognizing ROTC is a very important step nonetheless,” said Harvard Divinity School Professor Diana L. Eck, a Lowell House Master who has served on the BLGTQ Task Force, at the signing ceremony.

The recognition of ROTC represents a significant rapprochement between Harvard and the military and comes against the background of one of the most significant advances in civil rights in recent years. But like improvements in civil rights in the past, allowing gays and lesbians to serve openly in the military has been called only a partial victory as trans-identified individuals continue to be excluded from the armed forces.

With a degree on the horizon from the Law School, Jack says that he would like to join the military’s legal division. Instead, he will be taking a corporate law job in San Francisco.

“On the ROTC issue, I want to express how difficult it is to want to serve, be denied the opportunity, and have the institution you attend sanction that discrimination,” Jack writes in an email. “It is an incredibly marginalizing experience.”