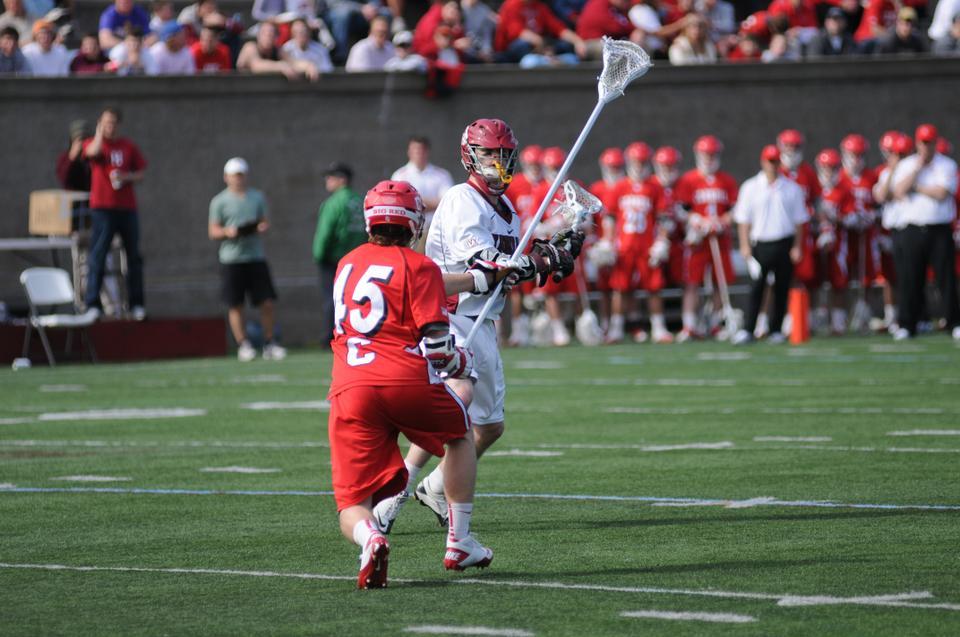 Co-captain Dean Gibbons, shown above in earlier play, was a key player in the team’s win against Penn on Friday but could not lead his team to victory against the Big Red on Sunday. Cornell’s offense picked up the pace in the second period, after junior co-captain Kevin Vaughan was called for a non-releasable illegal equipment penalty, and never looked back.
By Scott A. Sherman, Crimson Staff Writer

Up until the 2:46 mark of the second period of the Ivy League championship game Sunday afternoon, everything was going quite smoothly for the No. 17 Harvard men’s lacrosse team.

The squad was hanging tough with the No. 2 Cornell Big Red, containing the highest-scoring team in the conference and holding the nation’s best player, attack Rob Pannell, to just one point.

But suddenly, with the game tied 2-2, a whistle blew.

Fifty seconds into the advantage, Big Red attack Cody Bremner beat Harvard sophomore goaltender Harry Krieger—who had been sensational in net up to that point—and Cornell midfielder Mitch McMichael scored under a minute later to put the Big Red ahead, 4-2.

Cornell retained possession at the start of the second half, and sophomore Steve Mock added a man-up goal just 10 seconds into the period.

With three scores before the penalty had even ended, momentum had clearly shifted to Cornell’s side. The Big Red would dominate the rest of the contest, winning 15-6 while ending Harvard’s season and its NCAA Tournament dreams in the process.

“We’re certainly disappointed,” said Crimson coach Chris Wojcik ’96. “I think Cornell outplayed us [Sunday], and they deserve it and earned it. But I’m happy with our overall effort.”

After Mike O’Neil added another goal for the Big Red at the 12:03 mark in the third, Harvard tried to fight back. On a man-up chance of its own, senior Matt Hull found sophomore Ryan Stevens open in front of the net, and Stevens beat Cornell goalie A.J. Fiore to trim the deficit to 6-3. After JJ Gilbane responded with a score for the Big Red, junior Terry White cut the lead to three again, sprinting left to right and firing high on the run for the goal.

But at 5:15, that would be as close as the Crimson would get the rest of the way.

Three minutes later, Cornell’s David Lau came over the middle and scored off a pass from Pannell. As he did so, Harvard freshman Joe Petrucci pushed Lau from behind and was called for unnecessary roughness, giving the Big Red another man-up opportunity. After a Krieger save, the goaltender threw an outlet to Vaughan, who dropped the ball, and after Mock picked it up, he had an easy breakaway score. Lau added another goal with 25 seconds remaining in the period, putting Cornell up 10-4 heading into the fourth.

“Cornell is very opportunistic,” Wojcik said. “When we made a mistake, they exploited it, and we made some costly mistakes.”

The Big Red continued to pour it on in the final quarter. Midfielder Jack Dudley extended the lead to seven at 13:15. After Hull responded with a score at 10:55, Cornell added four more goals in a three-minute stretch, as Mock recorded his fourth and fifth tallies of the game and Gilbane and Pannell added their second each. Hull scored again with the game out of reach at 2:09, finishing with a hat trick in his final collegiate contest.

“Their team plays hard every game,” junior Jeff Cohen said. “The level of play they were competing at today was something we couldn’t match...I think you have to give credit to them. They’re a great team, and they came out and outplayed us.”

It was Hull who had responded after Pannell and Mock both beat Krieger low to put the Big Red up 2-0 early. With 5:11 remaining in the opening period, the senior took a pass on the left side of the net, spun towards the middle, pump-faked high, and scored. Stevens then fired a hard shot past Fiore to tie the game at the 11:45 mark in the second. In the meantime, the Harvard defense held Cornell scoreless for a 19-minute stretch after Mock’s first goal, with Krieger making big save after big save. But after Vaughan’s penalty, everything fell apart.

“[Cornell] capitalized and they executed,” Wojcik said. “They made the plays and were able to pull away from us. We didn’t convert some opportunities that we normally have in the past.”

The loss left Harvard on the outside looking in for the 16-team NCAA Tournament for the fifth straight year, as the Crimson’s bubble burst Sunday night. The defeat also ended the career of co-captain Dean Gibbons, the unanimous first-team All-Ivy standout, who will graduate with the ninth-most points in Harvard history.

“Obviously it’s a tough loss,” Cohen said. “It’s tough to end our season this way; it’s a tough way for the seniors to go out. But with us making the Ivy League Tournament, that’s something you can hang your hats on, and it really has been a great journey for our team.”