At Harvard, Social Space Woes Have a Long Past 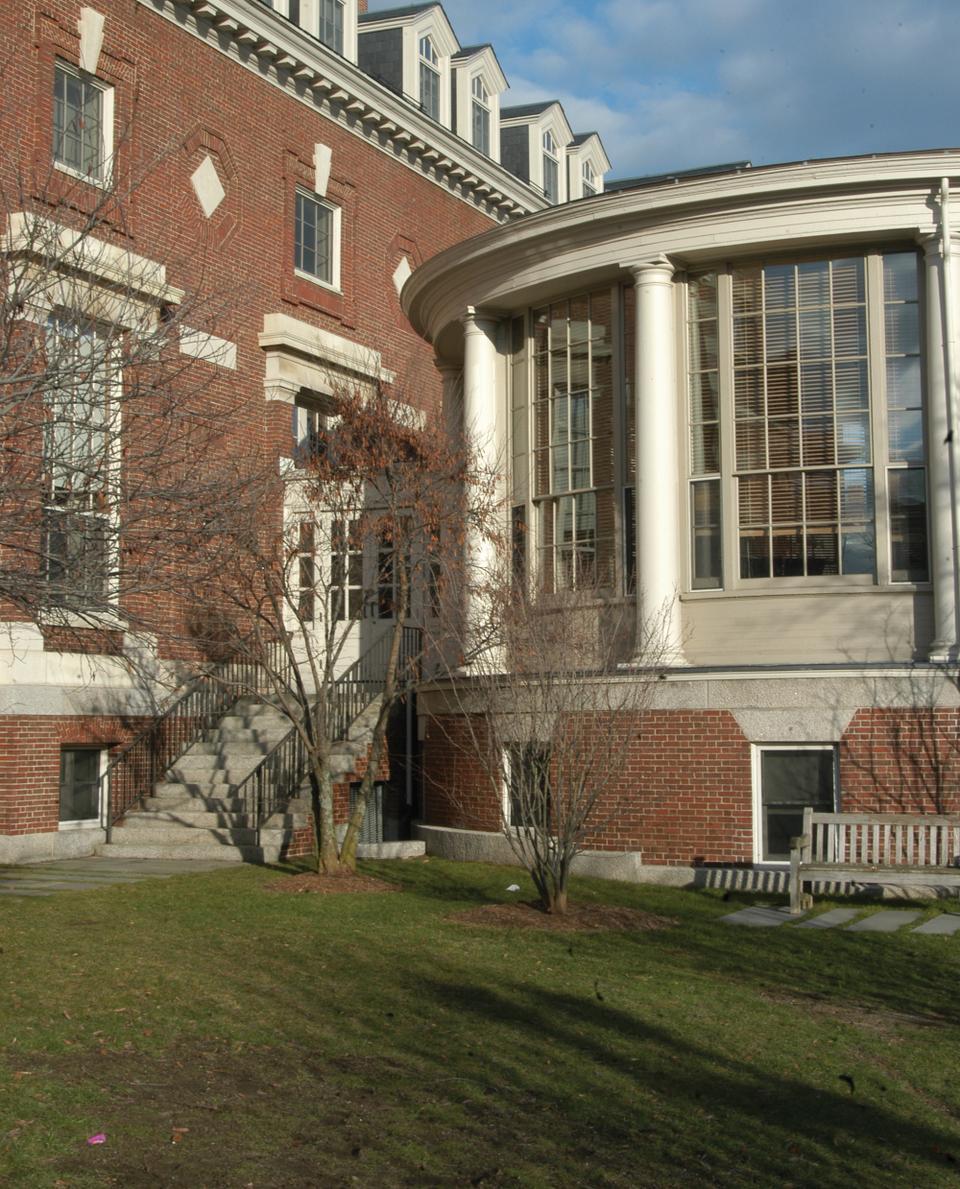 The Barker Center for the Humanities used to be the Student Union.
By Stephanie B. Garlock, Crimson Staff Writer

(Part I of this series appeared May 6.)

At Harvard, the cry for social space is nothing new. In fact, the effort to create a building to unify all of Harvard’s disparate populations has been going on for over a century.

In an 1899 speech, Major Henry Lee Higginson, class of 1855, chastised “the old clubs, with their small membership and high expenses.” In response to what he saw as the increasingly fractured student body, Higginson donated $150,000 for the creation of the “Harvard Union,” intended to serve as a space to unify undergraduates.

As former Dean of the College Harry R. Lewis ’68 recently put it, the Union was “the club for kids who didn’t have clubs.”

But even before the Harvard Union turned into the Barker Center in the late ’90s, students said that the Student Union did not sufficiently meet undergraduate needs for social space on campus.

For decades, the calls for more social space and possibly a student center have continued.

Over the years, the push and pull between students and administrators on the issue of social space has been a continual feature of student life at Harvard.

The patterns of the debate are clear. Over time, as student dissatisfaction with the current situation manifests in requests for a central student center, the administration responds with the creation of smaller spaces, an effort to find piecemeal solutions to a problem that never seems to go away.

Despite Higginson’s lofty goals for the creation of a centralized space to bring together undergraduates, over the past century, the changing nature of the student body and the spaces in which they lived, studied, and socialized have fueled persistent complaints about Harvard’s social life.

The end of Higginson’s dream came early, as the creation of the House system in the 1930s transformed the Union into the Freshman Union, a more institutionalized dining hall and social space for freshmen.

“The Union is dead between meals,” Phillip J. Parsons, then-director of planning in the Faculty of Arts and Sciences, told The Crimson in 1992.

Parsons was a significant player in one of the major transitions of undergraduate space in the past century. The University had just finalized its plans to convert the Union into a hub for the humanities—now known as the Barker Center—and move the freshman dining hall to Memorial Hall. A $7 million gift from Katherine B. Loker for the creation of undergraduate space in the basement of Memorial Hall seemed to provide an answer to the problem of social space.

But the pool tables and fast food in Loker Commons did not provide a lasting solution for students and the student groups to which they belonged.

“It was basically an uncomfortable study space,” former Undergraduate Council Vice President Samuel C. Cohen ’00 says. “While I was there, it never quite worked.”

Despite the projects of the last decade designed to increase available social space—including the opening of Lamont Café and the Cambridge Queen’s Head pub in the basement of Memorial Hall—these complaints are familiar to current Harvard students.

“If you go down to the Greenhouse Café in the Science Center, every table is taken up by students with their laptops,” former Dean of the College Benedict H. Gross ’71 says. “I still think it’s a pretty bad situation.”

For many Harvard students, an all-encompassing student center has been seen as the ultimate solution to the space problem. As a 1988 Crimson editorial succinctly put it, “students at Harvard have been asking for a Student Center since the end of World War II.”

Even while the Freshman Union was a functioning space for students in the Yard, the desire for more space pushed student leaders to petition for a student center.

As early as 1958, a different social need—interaction between Harvard men and Radcliffe women—pushed students to ask for a student center. In 1964, the two student governments asked the University to create an undergraduate student center in Lehman Hall—now home to a center for the Graduate School of Arts and Sciences.

As the Faculty of Arts and Sciences contemplated the transition from the Freshman Union to the Barker Center in the late 1980s, student leaders feared that the change would hurt student life.

With the loss of meeting rooms in the Union and some group spaces already in the basement of Memorial Hall, campus leaders worried about the future of undergraduate space in the Yard, leading to the creation of the group Students Concerned for a Student Center.

“I remember noticing the plans for renovation of the basement of Mem Hall and that it involved elimination of a lot of space,” Jeffrey A. Camp ’89, who was a co-chair of SCSC, recalls. “The undergraduates’ interests didn’t feel like they were strongly emphasized.”

Ten years later in the late 90s, Camp’s efforts were renewed by the Undergraduate Council.

In a report to the College community, the Council’s Student Center Working Group outlined their vision for the center—a building with student group offices, meeting rooms, performing arts venues, and a mall area with informal social spaces. The UC even allocated $25,000 in 1999 toward the creation of a student center as a symbolic gift, meant to show the administration the gravity of the cause, according to Cohen. By the end of the school year, the money was folded back into the UC budget and the Council shifted its efforts toward looking for spaces in existing buildings.

Over the past decade, the Council has periodically taken up the cause again, and promises of better advocacy for the creation of a student center have been a perennial presence on the platforms of UC candidates. Locations floated for the building have included Lowell Lecture Hall, the Inn at Harvard, Boylston Hall, and a lot at 90 Mt. Auburn St. that was eventually taken over by the Harvard University Library.

Most recently, a 2009 UC Social Space Task Force attempted to raise funds to purchase a space in the Square, most seriously considering a building at 45 Mt. Auburn St., the current location of the Democracy Center. After a summer fundraising campaign turned up only $700, the Council spun off the Student Community Center Foundation. By the end of last school year, this most recent cry for a student center had lost momentum.

In the past, the College maintained that the space needs identified by Cohen and other student leaders can be solved by creating a number of smaller social spaces.

The most definitive administrative support that the student center movement received came from Dean of Students Archie C. Epps III and his 1998 proposal for the creation of an all-inclusive “College Hall.”

“The single site is a way of enhancing community at the College,” Epps told the Crimson in 1999.

Yet even at the time, Epps was an exception among administrators.

“The proposal for a student center is not getting the support from my colleagues that it needs,” he added.

As Epps and student leaders lobbied for a student center, administrators searched for decentralized solutions.

“[Top administrators] agreed with many of the needs we identified, but not necessarily that it needed to be a student center,” Cohen remembers of his meetings with the administration as part of the Student Center Working Group.

Student center advocates such as Camp, Cohen, and Epps have run into the reality of space at Harvard—it is limited and expensive.

“Space is our one irreplaceable resource,” Lewis, while serving as dean of Harvard College, wrote in a 1999 memorandum to then-Faculty of Arts and Sciences Dean Jeremy R. Knowles. “Once land is gone, it is gone forever.”

Under Gross’s tenure from 2003 to 2007, the College attempted to create informal meeting areas and places to socialize within existing spaces, opening the Lamont Café and the Queen’s Head Pub.

Perhaps most controversially, Gross oversaw the renovation of Hilles Library in the Quad to create the Student Organizations Center at Hilles.

While the past century has seen repeated calls from undergraduates for a student center, for the first time, support from the President’s office could make it a reality.

In September during an interview with Charlie Gibson in Sanders Theatre, University President Drew G. Faust publicly entertained the idea of transforming the lower floors of the Holyoke Center into a student center.

Then, in a recent interview with The Crimson, she said that the University’s upcoming capital campaign will likely raise the funds necessary for its construction, if the University decides to go ahead with the construction of a student center in the Holyoke Center.

But students say that even if Faust commits University resources to creating a full-scale student center, it will take years to finish the space, leaving many current undergraduates echoing the complaints of students 100 years ago.

—Staff writer Julie M. Zauzmer contributed to the reporting of this article.