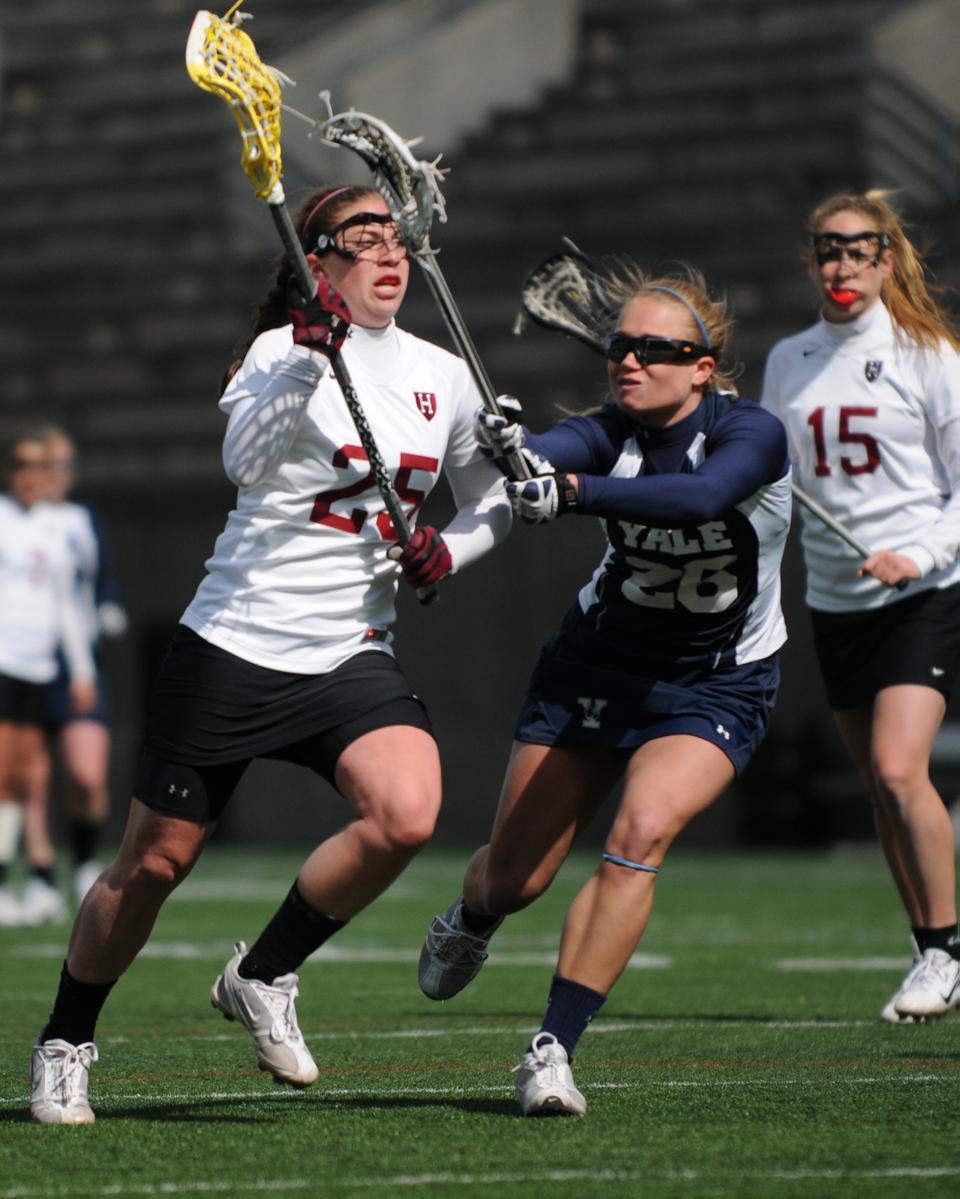 Sophomore Danielle Tetreault, shown above in earlier play, lead the Crimson in scoring with four goals against No. 14 Princeton on Sunday. Despite coming back from a 5-0 deficit and leading at one point, Harvard couldn’t hold on long enough for the win. The Crimson finished with a 10-6 record.
By Cameron Dowd, Crimson Staff Writer

The Harvard women’s lacrosse team had an automatic NCAA tournament bid snatched away from it in a heartbreaking 12-10 loss to Princeton on Sunday.

The Crimson took a late lead after a dramatic comeback in the second period overcame a five-goal deficit. But Princeton’s late run gave it the win, the Ivy League title, and a NCAA tournament berth.

“I’m incredibly proud of this team,” tri-captain Sam McMahon said. “We have had a great season, and we played hard in the Ivy tournament all the way through the championship game.”

In Sunday’s championship game, Harvard faced Princeton, a team that fell to the Crimson eariler in the season in a highly-contested matchup. This time around was more of the same, with the game coming down to the final period but leading to the opposite result.

The Crimson stormed back after falling behind 5-0 early to take a 10-9 lead halfway through the second half. But the Tigers responded with three unanswered scores to give Princeton the victory.

“We put ourselves in a very difficult position going down early,” Baskind said. “But [we] are proud of the way we fought back. Our tough schedule has prepared us for situations like that—it was just disappointing to let it happen again.”

Harvard scored consecutive tallies after the initial Tiger run, but Princeton came back with two goals of its own making to push lead back to five.

Even though the Crimson was down, 7-3, at the half, Harvard felt it would be able to get back into the game.

“We knew that it was our fault for the hole we were in at the end of the first half,” McMahon said. “We weren’t burying our shots and executing the defensive game plan, so with those adjustments, we knew we could get back into the game.”

The Crimson came out strong in the second half with three unanswered goals, cutting the Tigers lead to 7-6.

“We finished our shots in the second half,” Baskind said. “I think we played well defensively, and [junior] Kerry Clark had some huge saves.”

Later in the period, Harvard completed the comeback off a 3-0 run with the last two scores coming from sophomore Danielle Tetreault, who had four goals on the day.

The team’s goal of making the NCAA tournament for the fist time since 1994 was within reach, but in the end, the Tigers were able to execute their offense and pull out the victory.

“We won critical draw controls, buried our shots, and were aggressive on the defensive end to make a second-half run,” McMahon said. “[But] in the end, Princeton was able to capitalize on its offensive possessions to put itself back into the lead.”

In Friday’s contest, Harvard fell behind, 3-1, in the first 10 minutes of the game before making a two-goal run to tie the score at three.

Dartmouth continued its strong play, as the team went on a 5-2 run to make the score 8-5 with a little under 19 minutes to play.

But the Crimson, which had an 18-game losing streak against the Big Green dating back to 1994 going into the game, would not accept another defeat to Dartmouth.

Harvard made a furious comeback. Over the next 16 minutes, the Crimson put away every shot, played solid defense, and took control of the game in a 6-1 rally.

“We were able to get the draws, get quality offensive possessions, and made some great defensive stands,” McMahon said. “We just did all the little things well to get back in the game and pull off the win.”

The run gave the team an 11-9 lead that would prevail in the end, resulting in the upset.

“I think a lot of us feel like the win on Friday was the highlight of the year,” Baskind said. “We had a really tough time putting away our shots the first time we played them. We made it a point of emphasis in practice this past week. We executed our game plan and never doubted ourselves, which is something to be proud of.”

The victory was especially motivating, given that Big Green was co-Ivy League champion and recently beat No. 1 Maryland.

Despite the loss on Sunday, there are many positives to take away from the end of the season. Crimson junior tri-captian Melanie Baskind, junior Jess Halpern, and sophomores Tetreault and Jennifer VanderMeulen earned spots on the Ivy League All-Tournament team. While the team fell short of qualifying for the NCAA tournament, Harvard’s 10 wins on the season were the most for the program since 1994.

—Staff writer Cameron Dowd can be reached at camerondowd14@college.harvard.edu.