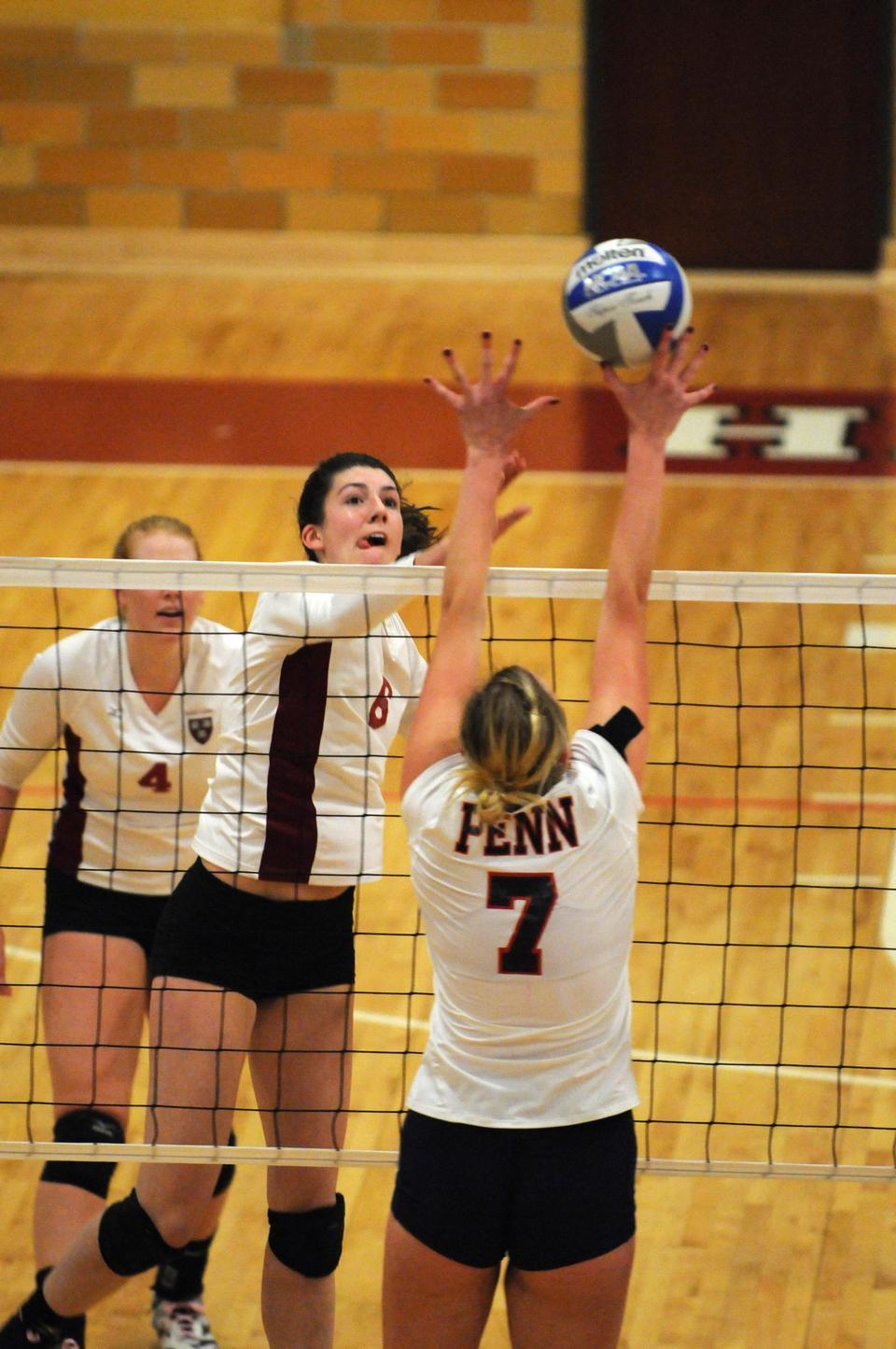 Shown here in earlier action, sophomore Teresa Skelly picked up 21 kills in Harvard’s first two matches at the Bryant Invitational, where it secured a 4-1 start to the season—the squad’s best opening record since 2001. The Crimson took a step back the next day with a loss to Maryland-Eastern Shore.
By B. Marjorie Gullick, Crimson Staff Writer

After a successful opening weekend in the Georgia State Invitational, the Harvard women’s volleyball team (4-2) had hopes for an even stronger showing this weekend.

On Friday evening at the Bryant Invitational, such dreams became reality, as the squad toppled both Holy Cross and Bryant. However, Saturday proved to be a different story, whose conclusion left the Crimson with a disappointing loss and a second 2-1 finish in as many weeks.

Despite Harvard’s stellar start in the first two games of the Invitational, a perfect finish was just not in the cards for the Crimson, which was blanked by the Hawks (the eventual tournament winner).

“UMES came at us with a different style of attack,” co-captain Sandra Lynne Fryhofer said. “It took us a while to adjust ... and we felt like we were all working hard but just weren’t getting the job done.”

The numbers told the story of the game, with the Hawks recording a superb 18 kills in the first set, while Harvard only mustered five.

The second set was more even—each team posted nine kills—after the Crimson jumped out to an early 3-0 lead, before the Hawks rallied with a 7-1 run midway through the game to gather the momentum for a second-set victory.

The run was started by a trio of aces by Maryland Eastern Shore, which had only seven on the match. Harvard fought back in what would be the final set, leveling the playing field at 6-6, before the Hawks took a lead that it never lost.

The Crimson fell behind for good when the Hawks pulled ahead, 16-10, and won only six more points before losing the game and match, 25-16.

“We never really showed up [on Saturday], and we didn’t adapt to Maryland’s level of play,” co-captain Christine Wu said. “We didn’t play Harvard volleyball.”

Coming off a dominant win against the Crusaders, Harvard entered its second match of the night against Bryant, which was reeling from a 3-1 loss against Maryland Eastern Shore.

The Crimson took the first two sets handily, 25-17 and 25-22, respectively, before Bryant fought for life in the third, turning the tables for a 25-22 victory.

Although it started behind in the fourth set—no doubt reviving the memories of its past fourth-set woes—Harvard squashed any chance of a comeback in the game, claiming a final 25-19 score, secured by a couple of kills by freshman Kristen Casey and a kill from sophomore Teresa Skelly.

It was the second set in a row in which Skelly—who recorded 21 kills on Friday—delivered the final blow.

“We had two back-to-back matches on Friday night that were physically exhausting,” Fryhofer said. “But we came together, found fuel in the reserve tank, and came out on top. That was a good night for us.”

The Crimson was led by Casey, who posted 15 kills and three service aces in the win, and Wu, who added 28 digs.

In its first match of the night, Harvard took the first set in a competitive 25-22 game and never looked back, winning the subsequent sets, 25-12 and 25-20, respectively.

The Crimson’s victory in the first game did not come easily, though, after it dropped the opening three points and fell behind, 12-5, halfway through the set.

Harvard was done but not out and fought back to finally take the lead at 20-19 after its offense—led by junior Taylor Docter and Skelly—woke up.

The offense kicked into full gear in the second set, owning a match-best .394 hitting percentage with 18 kills.

In the third and final frame, the Crusaders tried to rally, evening the score midway at 13, but kills by Skelly and sophomore Erin Cooney and an ace by Wu sparked enough momentum for the Crimson to earn its first win of the weekend.

“We knew what it took to beat [Holy Cross],” Wu said. “We knew we didn’t need to play down to their level and ... we wanted to stay in our system and play our game.”

“This tournament was a good one for us because it gave us a look at different teams and prepares us for the Ivy League,” Wu said. “We’ll have to learn how to adapt to other teams, but at the end of the day, any game time experience allows us to get our kinks out of the system.”